The display is one of the most important aspects of a mobile device. This is even more true for tablets than smartphones, with tablets essentially being giant displays that you hold and interact with. Given that Dell has not had a massive presence in the mobile space in recent years, I had no idea what to expect from the display on the Venue 8. It's an 8.4" 2560x1600 AMOLED display, and with its thin bezels it shares the same Infinity Display branding as Dell's XPS 13. The display on the QHD+ XPS 13 has very good calibration, and so one would hope that this would apply to the Venue 8 as well. 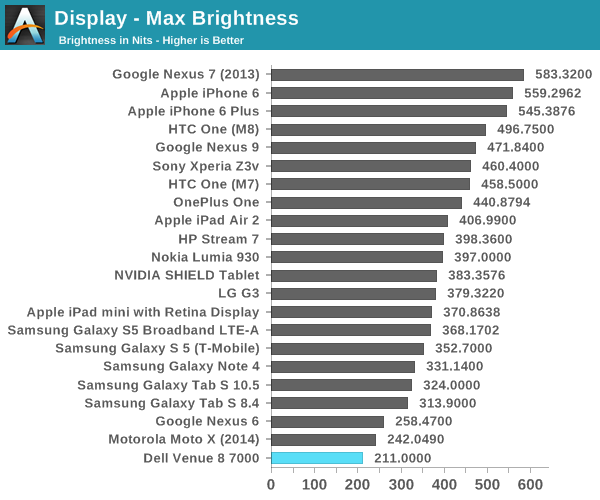 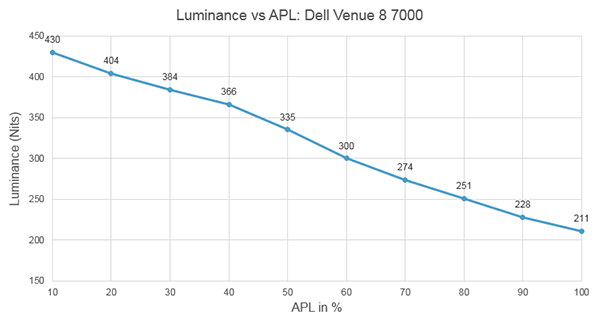 Our first test is the maximum brightness of the device. As you can see, at 100% average picture level it's not looking good, with the Venue 8 having the absolute lowest brightness of any device we've tested in recent years. Indeed, when using the device in any environment with unforgiving lighting it could be difficult to see the display. What's also unfortunate is that the Venue 8 doesn't have any sort of brightness boost when auto brightness is enabled like on the Galaxy Note 4 and Moto X 2014.

One new chart that I'm introducing for AMOLED devices is a graph of the device's brightness at a given average picture level (APL), which is the percentage of the display that is lit compared to a 100% white display. Because AMOLED displays are able to turn pixels off, they are able to drive a higher brightness with a lower APL while staying within their target power usage. As you can see, the brightness of the Venue 8 will go as high as 430 nits when only 10% of the display is lit. Based on our previous testing, it can be said the APL for your average web page or app is somewhere around 80%, and so the brightness of the Venue 8 can be closer to 250 nits in normal use. Even so, 250 nits is quite dim when compared to other phones and tablets we've tested, and it's unfortunate to see all the recent AMOLED devices not made by Samsung hovering around that number. 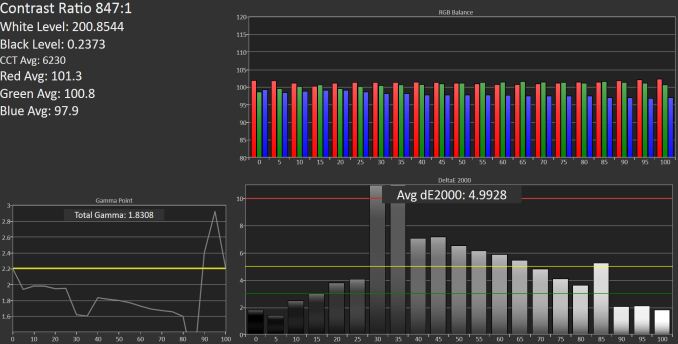 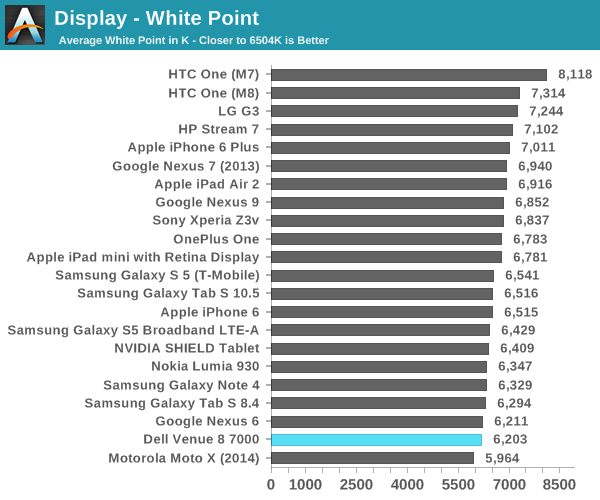 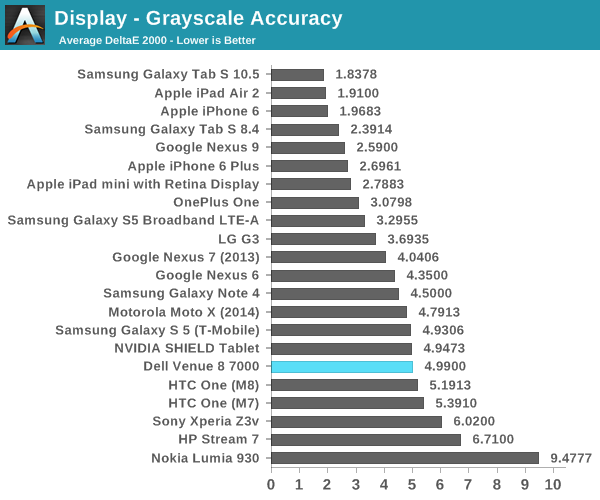 The greyscale results on the Venue 8 are certainly not the worst of all the devices that we've tested, but with an average DeltaE of nearly five the errors are clearly visible for most shades of grey. When looking at the RGB balance for each shade we see that there's a fairly consistent lack of blue in the luminance which causes a noticable red shift in the device's whites and a resulting white point of 6203K. 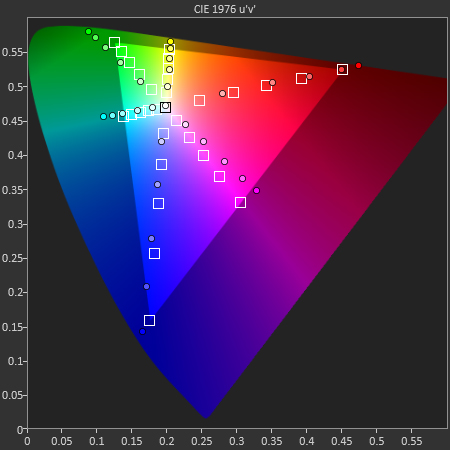 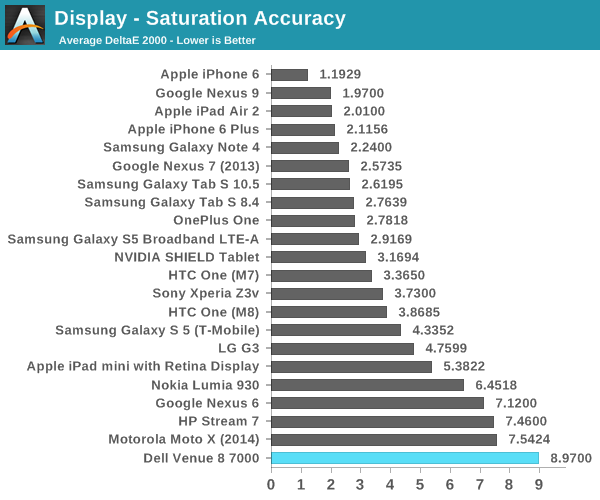 In our saturation test, the Venue 8 performs exceptionally poorly, and comes in with the highest DeltaE of any device that we've tested in recent times. There's a large amount of saturation compression, with certain primary colors like green outputting what should be 100% saturated green with an input of only 60% saturation. In fact, some of the shades of red and green are more saturated than any color I have ever seen on a display before. While this could be a good thing on future devices with color management and Rec. 2020 content, at the moment it simply makes content designed for the sRGB gamut look wildly inaccurate. 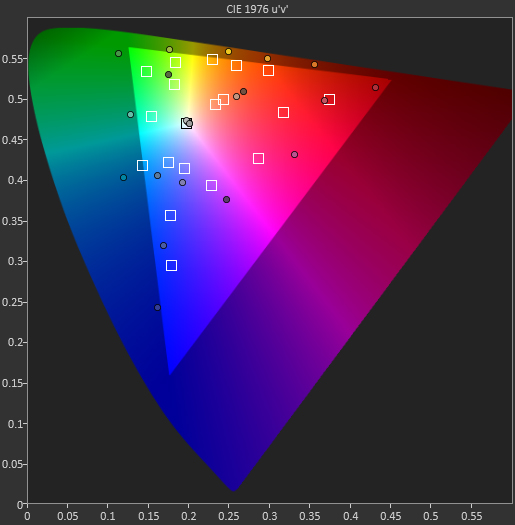 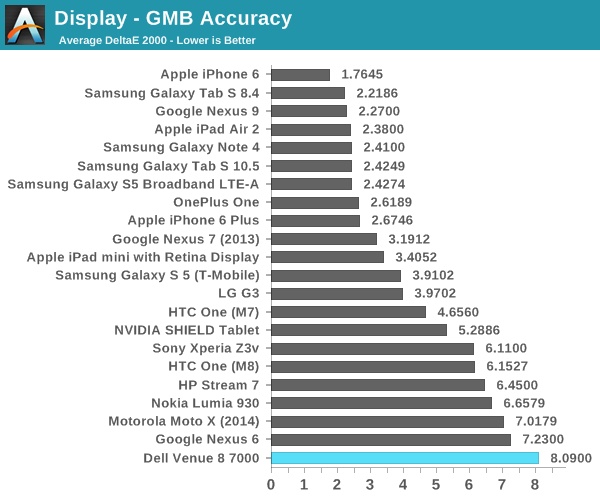 With the large errors in greyscale and saturations, there's not much hope for accurate reproduction of color mixtures. With the color checker test we see an average error that is once again larger than any other device recently tested. What's even more frustrating is that the largest errors are in mixtures of green and red, which includes skin tones. Obvious errors in skin colors are visible in photos and when watching both animated and live action video on the Venue 8. While it's definitely not unusable, I would recommend pretty much any other device if looking at photos and watching videos is something a user wants to use a tablet for more than occasionally.

It's unfortunate that such a high end device is hampered by a relatively poor display. Every recent AMOLED device that isn't produced by Samsung has suffered from the same lack of calibration and low brightness, and on every single one of them it has a very negative impact on the user experience. In addition, the Venue 8 suffers from the color banding in darker shades of grey and green that exists on some AMOLED displays, and the PenTile subpixel pattern can be visible on the edges of smaller text even at a normal viewing distance. AMOLED displays have many benefits, but if manufacturers are unable to source calibrated panels of the same quality as those in Samsung's phones and tablets then they should seriously consider opting for a good IPS LCD display instead.