It's readily apparent that the 700M gaming mouse has been released to go alongside the 700K keyboard, so much that we wonder why Cougar does not offer them as a bundle as well. Both are specifically targeted to FPS/RTS gamers and the UIX software can interconnect their functions. Of course, the company claims that this mouse is also suitable for MMORPG gaming but it would not be our first choice for that. Cougar surprisingly invested a lot into the creation of this mouse – two years of R&D, the company claims. Their effort seems to be paying off, as the 700M received two awards already – the Computex Design and Innovation and the iF Design awards.

The 700M gaming mouse is unique in a number of ways, the most notable of which is the use of an aluminum frame. Most gaming mice are entirely plastic or have an aluminum bottom plate, while the 700M has a frame that extends to the top of the mouse. The rest of the mouse is still plastic of course but, according to Cougar, the aluminum frame makes the 700M "more rigid and robust". It's also relatively lightweight, as the 700M weighs just 110gr, but it is a colossal exaggeration to suggest that the aluminum frame is going to increase the mechanical cohesion of a mouse, at least to a degree noticeable by the user. It is cool to have but many high performance gaming mice are made entirely out of plastic and their structural integrity remains excellent. 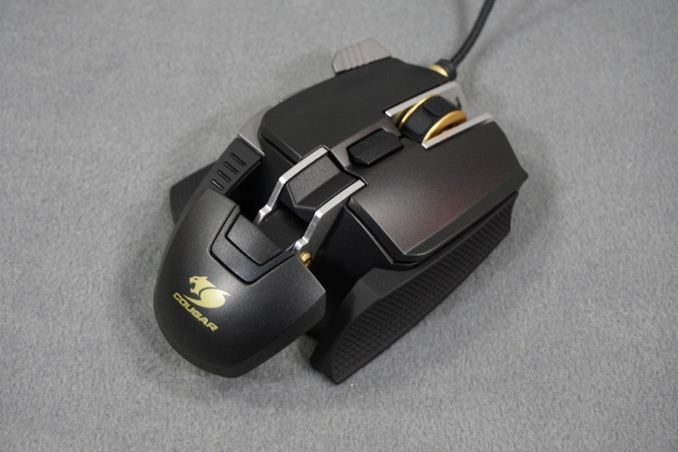 Cougar went with an "open" design that provides support where necessary and allows the user's palm to breathe. The top plastic parts are satin and smooth, as with the vast majority of mice, for increased comfort. The side plastic parts are much thicker, made out of corona treated plastic that feels softer and more comfortable while increasing the user's grip. To increase the grip even further, Cougar etched a honeycomb pattern on the side covers as well.

Including the two basic and the wheel's button, the 700M has eight programmable buttons total. There are two "forward/backward" side buttons, one "DPI selection" button beneath the wheel, one "fire" button next to the left main button, and one "sniper" button on the left side grip. The fire and sniper buttons are unique features of the 700M and their positioning can be very convenient for FPS gaming. Cougar placed the sniper button on a 45° angle, claiming that it improves the hand's stability while aiming. It does feel comfortable and is easy to use, but horizontal side buttons should not be creating stability problems either. The function of these buttons can be programmed via the UIX software.

Another unique feature that Cougar is proud of is the "Muzzle Brake SR" metallic tube that can be seen at the front of the mouse. Aside from the fancy name and "gun barrel appearance", it is simply a metallic tube that provides mechanical support to the cable. It is a feature that most users will find redundant, except for those that are overly violent while gaming and tend to tear the cables out of the mice they use.

Next to the cable insert and beneath the scroll wheel, Cougar installed RGB LED lighting. Three LEDs (Red, Green and Blue) have been installed so as to project one color on the mousepad/desk. The lighting can be continuous or have a breathing effect, and different colors can be linked to each mode, allowing visual confirmation of mode changes by the user. The only small issue here is that the aluminum frame reflects and changes the wavelength of the LEDs, which means that combined colors may cause multiple colors to appear under the scroll wheel. For example, for white (all three LEDs at maximum intensity), all three color hues appear beneath the scroll wheel, even though the color being projected on the mousepad is white.

At the front of the mouse, beneath the palm rest, there is a golden thumbscrew. This can be used to adjust the height of the palm rest, up to making it almost parallel with the surface. The palm rest can also be changed with a smaller, "sport" version that Cougar supplies alongside the mouse. The smaller version should feel more comfortable for users that prefer a "claw grip" and move the mouse around with their fingers. 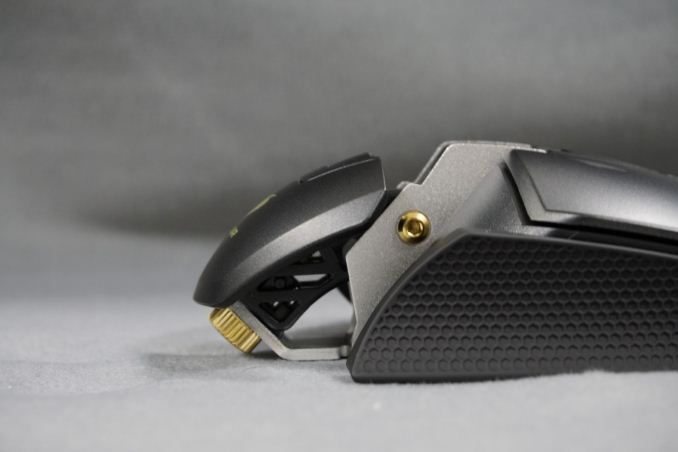 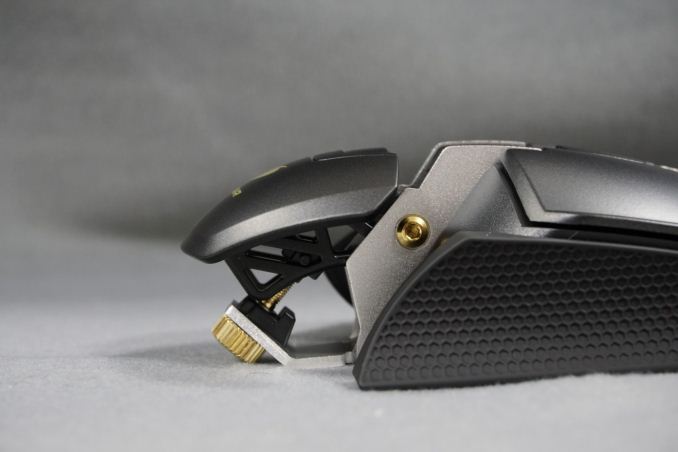 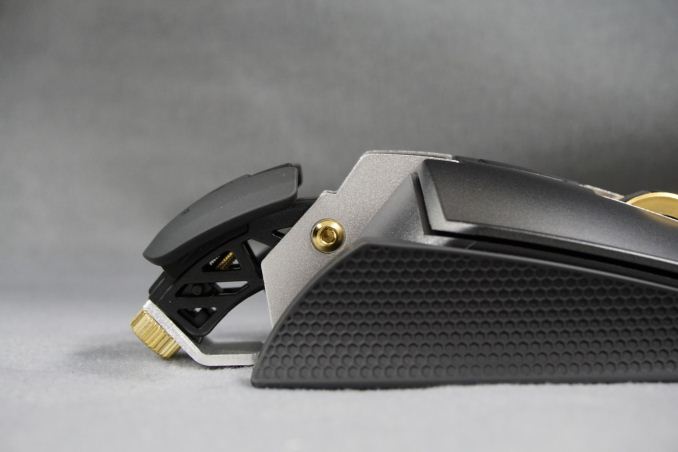 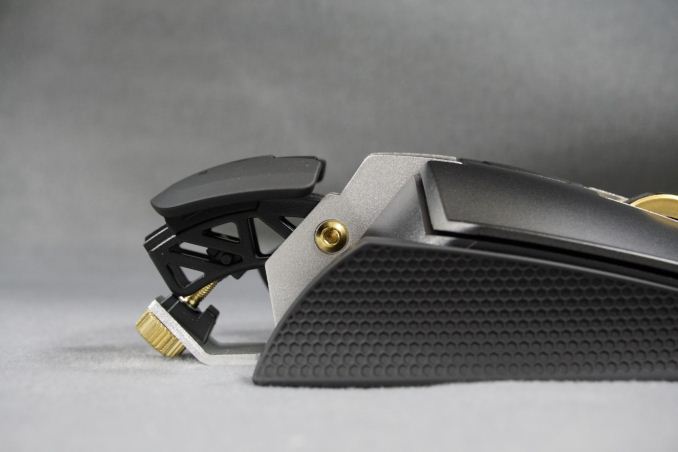 The weights of the 700M are hidden just beneath the DPI button. Four 4.5gr button weights are provided, allowing the user to adjust the weight of the mouse from 110gr up to 128gr. Still, even with the weights installed, the aluminum frame of the 700M makes it a very lightweight mouse. Hardcore gamers who are used to playing with heavyweight mice might be disappointed at first, but the low weight of the 700M is not difficult to get used to. Strangely, Cougar does not provide any container for the weights that the user chooses not to install.