In our second server upgrade of 2001 we worked with Pogo Linux to setup two 1U Linux machines that would act as hardware load balancers for our 9 web servers. Today the AnandTech Web Architecture stands as follows:

Due to drive problems with the load balancers (interestingly enough they were using IBM 75GXP drives), we had to perform some maintenance on the systems by installing new drives and rebuilding the software setup. Outside of that, however, our two load balancers remain unchanged from their original configurations. As a quick refresher, here are their specs:

As you can see there's nothing too spectacular about the specs of these systems; we simply wanted something in a low-profile 1U chassis that would be as reliable as possible.

Last year, we came to Pogo with a request for a different sort of machine. The stats for all of the AnandTech Web Servers can quickly take up quite a bit of space. These are the stats that record how many people visited the site, how many pages they read, if/when they came back, etc… This information is generally very useful to our sales staff and it's important that it is kept in its entirety. Unfortunately, a month's worth of stats can easily fill a few 40GB drives. While web server logs are easily compressible, sometimes you need them in uncompressed form, and thus we needed a machine that would become an easily administrable storage server for analyzing our stats. 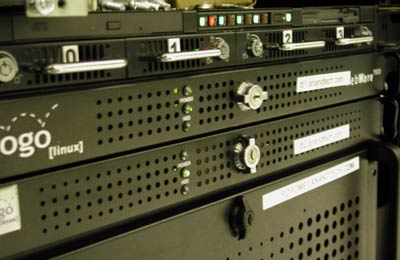 From top to bottom: StorageWare 1400, Load Balancer 1 and Load Balancer 2 (the final 4U box that is cut off is an old web server that was being removed)

Pogo had the perfect solution, their StorageWare 1400. The beauty behind the 1U StorageWare 1400 is its inexpensive RAID configuration made up of a 3Ware IDE RAID card and up to four IDE drives. The setup we asked for featured four 100GB IDE drives in a RAID 5 configuration (for redundancy, performance wasn't a major concern with this box) for a total of 300GB of usable storage space.

As with all of Pogo's setups the box runs Linux and is setup with PogoConf, Pogo's version of the popular Linux configuration system. The main attraction for the box is that because of its IDE RAID setup, you can get incredible amounts of storage at an extremely low cost.

With 400GB worth of hard drives in a fairly powerful server priced at less than $2500, it is difficult to beat the value of IDE RAID.