As our first server upgrade of 2002, we didn't pursue an upgrade out of a need for more power, but rather we upgraded in order to provide more headroom for the future - literally. Remember that our old Athlon servers were put in both 4U and 5U cases (we managed to get a couple into 2U chassis), which are highly inefficient. To put things into perspective, the racks that these cases are mounted can accommodate a combination of cases and devices totaling 45U in height (1U is approximately 1.75" high).

We could fit around 9 servers to a rack with our 4U and 5U cases. With 17 servers in our farm, it became very clear that this was not an efficient use of rack space at all.

Our Old Configuration in 1.5 Racks 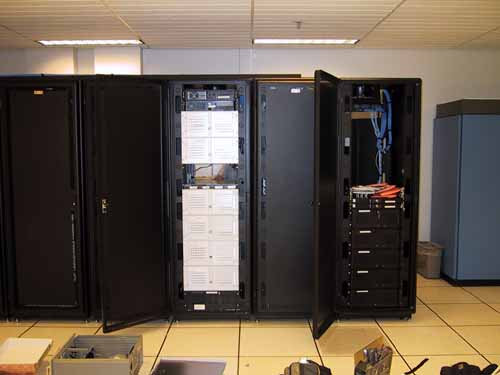 With the help and cooperation of Appro, we spec'd out a configuration using their 1124i chassis (an IDE version of the 1124s used as our Forums Database Server) for all 9 of our public webserver boxes. The systems were configured as follows:

With the dual on-board NICs and on-board ATI RageXL video of the Tyan Thunder K7, we were able to keep the external peripherals down to a bare minimum. Each 1124i system featured two sticks of DDR SDRAM and a hard drive in addition to the CPUs.

You'll notice that we moved away from the IBM Deskstars used all of our previous web servers due to recent questions of reliability in regards to IBM's 75GXP, 60GXP and 120GXP lines. We have no conclusive evidence to support theories for/against the reason for the seemingly large number of failures (we've encountered noticeable amounts in our servers, labs and in personal systems of our staff), but we wanted to remain on the safe side and thus went with Seagate drives.

Many have asked why we choose to go with IDE drives in our web servers instead of SCSI drives for their performance and reliability. These web servers are not very I/O intensive, as most of the material being served is cached and is thus coming straight from memory, which negates the need for a high-performance drive. And as you can probably guess, we go through web servers pretty quickly due to our roots in the enthusiast community (how long have you gone without upgrading your system?). Since the drives are replaced relatively quickly, they rarely get a full workout to the point where long term lifespan is a factor in our decision to upgrade. Sticking with IDE simply makes the most sense for us (the same cannot be said about our I/O intensive DB servers however).

More on the board itself; the Tyan Thunder K7 has proven to be very reliable since we first brought it to the farm last year. The inclusion of dual Ethernet controllers and on-board video make it perfect for a 1U chassis. The fact that the DIMM slots are angled allows us to use just about any type of registered DDR DIMM module regardless of height.

Our memory of choice has been Corsair as they were the first to provide high-density DDR266 modules that were fully compatible with the Tyan Thunder K7. We currently use three sticks of their 1GB modules in our Forums DB server.

Each web server was outfitted with 512MB of RAM; prior to this upgrade the servers peak memory usage was just under 256MB, so we felt the need to move up to 512MB as a forward-looking upgrade.

Our CPUs of choice were the Athlon MP 1900+ processors: two per box. As we first discovered back in June, the Athlon MP makes for an excellent database server processor. Most database servers rely on the ability to move large volumes of data, very quickly, while performing relatively simple (from a machine language standpoint) operations on the data. The CPU's ALU (Arithmetic and Logic Unit) is the main unit stressed and optimizations for SIMD instruction sets (such as SSE2) are virtually nonexistent. It all comes down to FSB bandwidth, memory bandwidth, cache (size, latency and bandwidth) and raw computational power. The combination of the 760MP platform and the Athlon MP processors provides for a very high performance solution at an extremely low cost.

The same can be said for the use of the 760MP/Athlon MP on the web server side of things. The requirements are much less stringent, but the areas to focus performance are the same. At the time we were giving Appro the specifications for these boxes, the Athlon MP 2000+ CPUs were around a week away from being launched, but we stuck with 1900+ CPUs. After all, another 66MHz wouldn't make a huge difference.