In order to keep testing consistent across all 8-bay units, we performed all our expansion / rebuild testing as well as power consumption evaluation with the unit configured in RAID-5. The disks used for benchmarking (Western Digital WD4000FYYZ) were also used in this section. The table below presents the average power consumption of the unit as well as time taken for various RAID-related activities.

The graphs below show the power consumption and rebuild duration when repairing a RAID-5 volume for the various 8-bay NAS units that have been evaluated before. 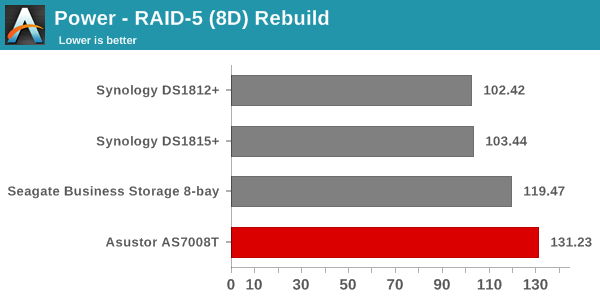 Asustor has the best RAID rebuild durations amongst all the NAS units that we have evaluated so far. The power numbers, though, are a bit skewed by the fact that the current version of ADM has a major problem with the fan curves in the Auto setting. 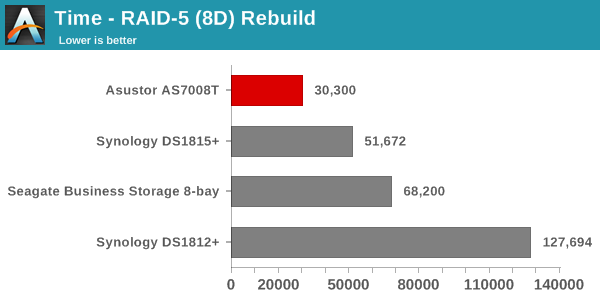 We observed that the fans would remain at 600 RPM till one of the HDD's temperature reached 53 C. After that it would suddenly ramp up to more than 3000 RPM, but go back to 600 RPM as soon as the temperature dropped below 50 C. The duration for the medium speed settings (around 1500 RPM) was very minimal. The end result was that, during the RAID expansion and rebuild processes, the fan would ramp up to very high speeds periodically ever 20 - 30 minutes. On top of this, after around 3 days of the ramping up and down, we found that the fan control stopped working (hot HDDs wouldn't trigger higher fan speeds). Manually altering the fan speeds wouldn't work either. Only a restart managed to solve the problem. In order to ensure system safety, we put the Fan Speed settings on High all through the RAID-5 rebuild test. [Update: Asustor has released a new firmware version which fixes this problem.] This explains the unreasonably high system power consumption in the above graph. With the speed setting at 600 RPM, the rebuild process only consumed around 123 W on an average (compared to the 131 W we observed above).

The business-oriented COTS (commercial off-the-shelf) NAS market is interestingly poised. While Seagate and Synology have decided to target it with Rangeley-based systems, QNAP has decided to go the Bay Trail-D route. The nett result is that 8-bay systems from Synology (DS1815+) and QNAP (TS-853 Pro) retail for less than $1100. The decision to go with Haswell means that Asustor is targeting the higher end of this market segment. The price is correspondingly higher at more than $1500.

Haswell ensure better performance for many workloads compared to the competition. The ADM OS is very pleasing to use (particularly when compared to other fledgling OSes such as the Seagate NAS OS). 'System Migration' from existing low-bay count Asustor NAS units was quite easy (We tested it out by moving the disks from the Asustor AS-304T to the AS7008T for long term testing, and the AS7008T just worked with the settings from the previous NAS). Asustor has put in lot of focus on the ADM packages as well as mobile apps.

The above advantages aside, there are certain areas where Asustor could improve. The first is on the hardware side - Both QNAP and Synology's offerings at a lower price point come with four network links included in the package. While the AS7008T does have a PCIe expansion slot to plug in 10GbE cards, it really should have been part of the base platform. The second is the fact that ADM needs some more time to mature - For example, even the Seagate NAS OS has the ability to have multiple initiators to connect to a single iSCSI target. Asustor indicated that it is on their roadmap, but, unless their customers start demanding in more numbers, it will not be prioritized. The web UI could also use some polish with resizable inner windows.

On the whole, it is heartening to see another strong and upcoming contender in the SMB / SME NAS space. Asustor currently puts a premium on the AS7008T, with Newegg pricing slightly above $1500. They are able to command the premium not because of the wealth of hardware features, but more because other vendors have not really updated their Core i3-based models that target this particular market segment. We look forward to the Asustor Data Manager (ADM) OS getting more updates and becoming a more well-rounded operating system.