While we've gone over some hefty material till now, we're still missing a crucial comparison for the Note 4 with Exynos 5433. How does it fare against the Snapdragon 805 version?

For this comparison we go to check one last time the estimated SPECint2000 score of the two devices. Again, this benchmark is purely for an architectural comparison between Qualcomm's Krait cores and ARM's new A57 CPUs. This is an outdated and deprecated benchmark and isn't really representative of mobile workloads, but it gives a good idea of synthetic CPU performance. 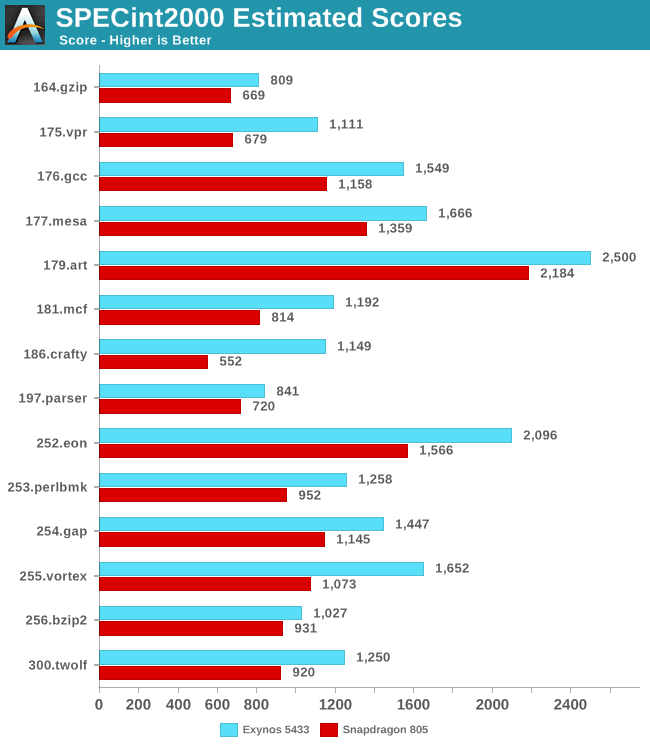 Qualcomm's Krait core is by now almost three years old - a long time since we first saw the first Snapdragon S4 phones come out. Qualcomm has been able to squeeze a lot of life out of the architecture with the help of incremental updates, but now it's clearly reaching its limits. At 2.7GHz the device is still at an estimated 37% overall disadvantage against the 1.9GHz clocked A57 in the Exynos 5433 variant.

The Snapdragon 810 is just around the corner and we'll be seeing Qualcomm adopt ARM's new ARMv8 cores instead of relying on their own design. Qualcomm is certainly working on their own custom ARMv8 core, but there's still not much in the way of details other than to expect it around roughly a year from now. As it stands, the first half of 2015 seems to be dominated by A57 SoCs.

We continue on to our more classic set of browser JavaScript based benchmarks. This time around I'm including the stock browser scores alongside Chrome to demonstrate an issue I'll be getting to in just a bit... 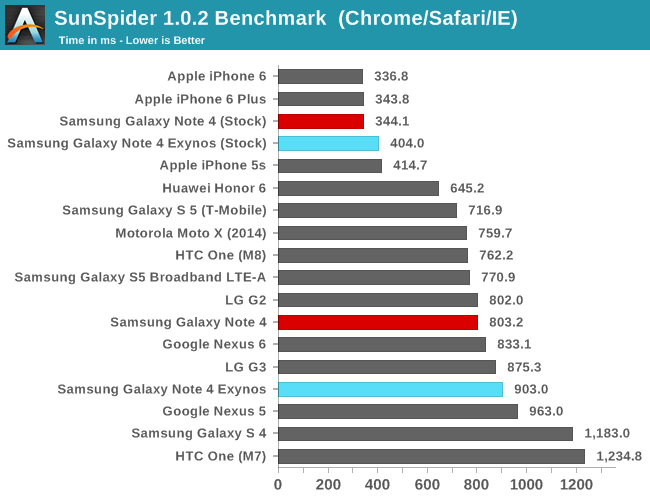 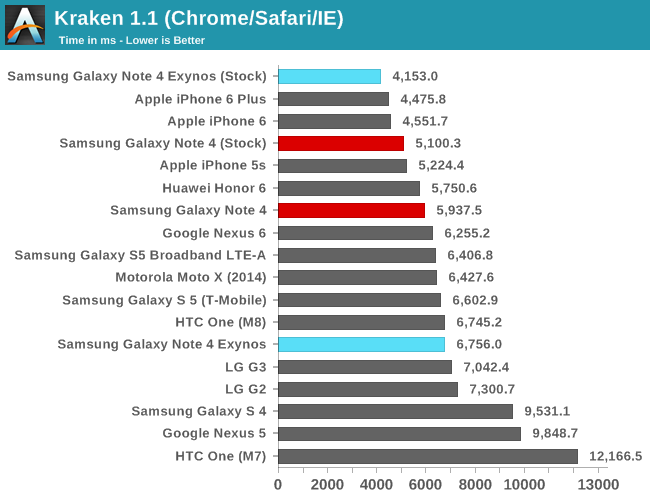 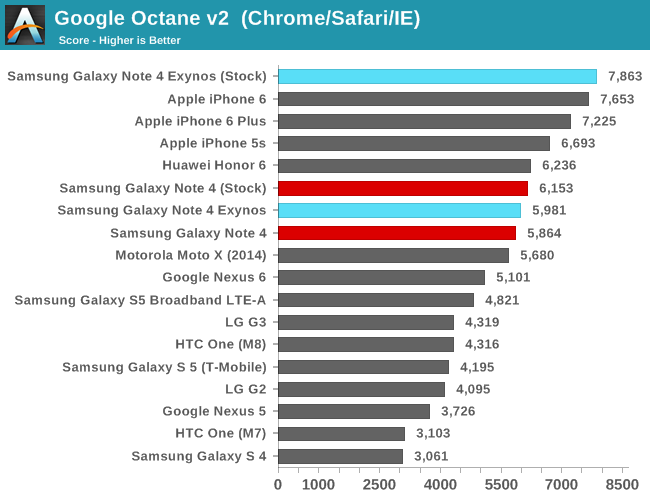 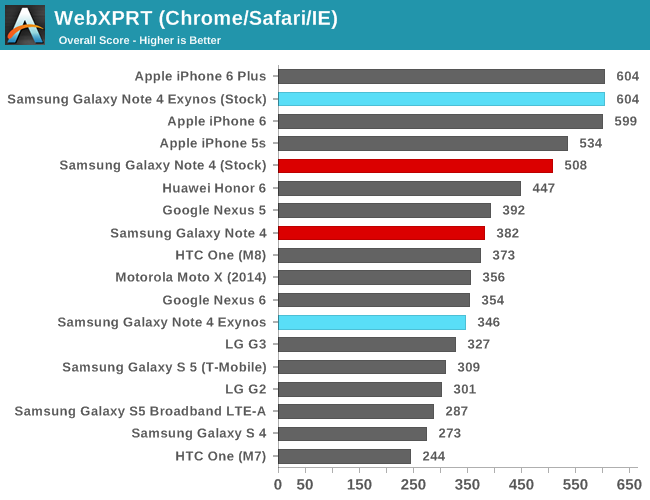 What we're seeing here is an increasing problem of our browser benchmarks. Vendors have optimized their stock browser libraries to target the specific CPU and GPU of a given device to be able to squeeze all possible performance out of the hardware. This aspect grows increasingly important as the architectures start to vary quite a lot between each other. Here employing Chrome as-is by Google is a great disadvantage as it's not optimized for any one platform. Google offers partial solutions (e.g. the Chrome Samsung Support Library which enables Chrome to use some stock OS browser libraries - a definite improvement in speed over vanilla Chrome), but it hasn't seen an update in over eight months and doesn't work on the Exynos 5433.

With significant performance improvements of the ARMv8 cores of the Exynos 5433 needing at least an AArch32 compiled code-base for them to be unleashed, it's natural to try to stick to Samsung's own solutions until the Android ecosystem gets updated. Curiously, the Snapdragon 805 also benefits from the stock browser, meaning Samsung is also extensively optimizing for that platform.

The scores on the Exynos version of the Note 4 are outstanding, beating out all existing devices in our more complex benchmarks. SunSpider is the exception, but seeing the vast discrepancy between browsers and even the Snapdragon version matching Apple's new A8 has made us come to the conclusion that this benchmark has run it's time as a valid test case, and thus we're dropping it from our 2015 test suite going forward.

Heading over to BaseMark OS II as our more general system benchmark, we see again the Exynos version outperform the Snapdragon. It's not quite enough to beat Apple's A8 processor in the new iPhones, still lagging a bit behind their custom architecture and OS.

We'd like to mention that there has been a big overhaul in BaseMark OS II in a recent December release, fixing various issues regarding score computation, and it also introduced changes in the benchmarks themselves. As such, the new scores are not directly comparable to reviews published in the past. We've re-run the most recent flagship devices through the new benchmark and will go forward with the new version for future articles. The new scores are now labeled "BaseMark OS II 2.0" instead of "BaseMark OS II". 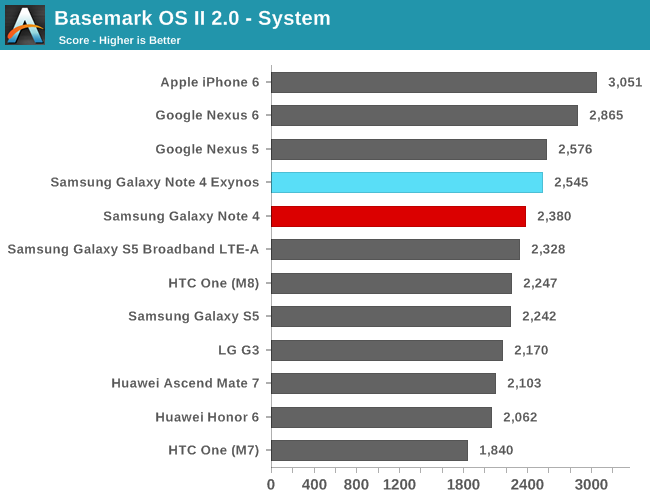 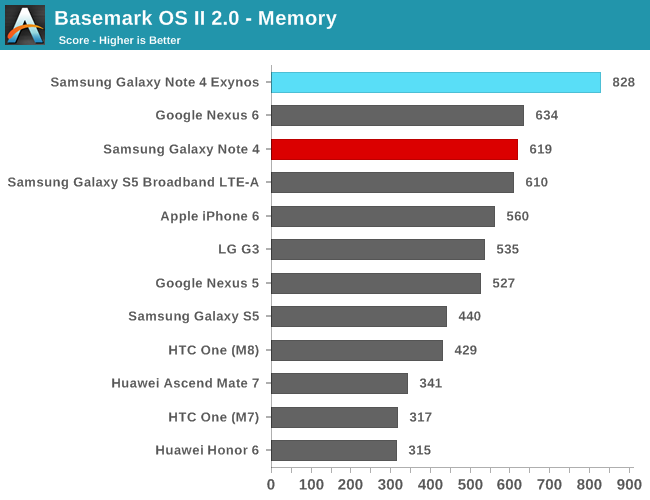 The memory test is a general NAND speed test. Here the Exynos version is outperforming the Snapdragon by quite a bit. This is intriguing as one would expect both versions to employ the same eMMC, but that's not the case. This Exynos version uses an R21AMA eMMC chip while our tested Snapdragon unit has an R218MA chip. They're both 32GB units, so I'm not too sure if there's a performance delta between what appears to be different series of this eMMC model or if this can be attributed to Samsung's use of a more performant Synopsys DesignWare MMC controller in the Exynos compared to Qualcomm's own SDCC. I double checked this in our AndroBench test and there there was no significant deviation from the Snapdragon review unit, so this might just be a peculiarity of the specific load of the memory test in BaseMark OS II that favors the Exynos eMMC controller and SoC architecture. 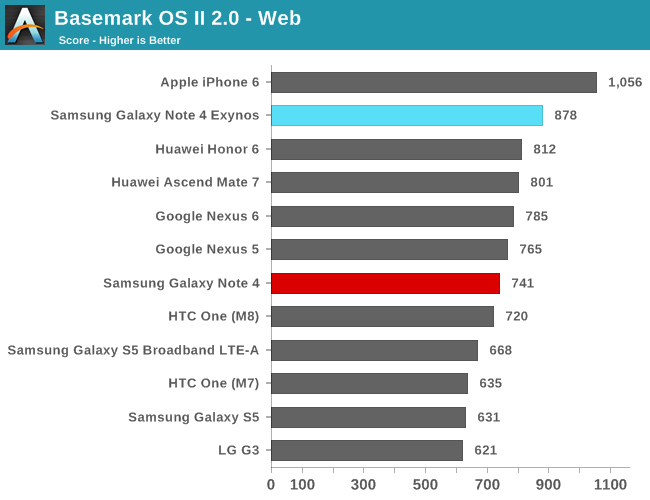 The web test is dependent on resolution as it's rendering an HTML canvas elements and doing CSS transformations on-screen. The Exynos Note 4 leads all other Android devices, only again coming short of the iPhone 6 - but one must keep in mind this test is resolution dependent and the iPhone's lower resolution for sure helps. 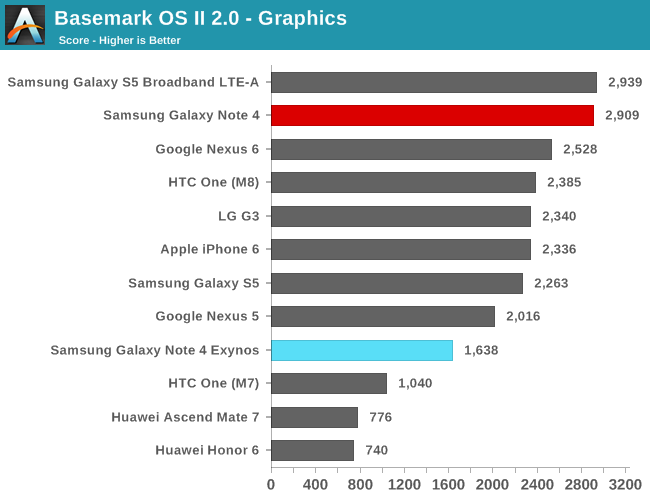 The graphics test again is dominated by the Snapdragon version of the Note 4. The Adreno 420's vast ALU and fillrate throughput are clearly visible as it manages to separate itself from the competition. The Mali T760, while still leading the ARM pack, is well behind Qualcomm's and Imagination's GPUs. 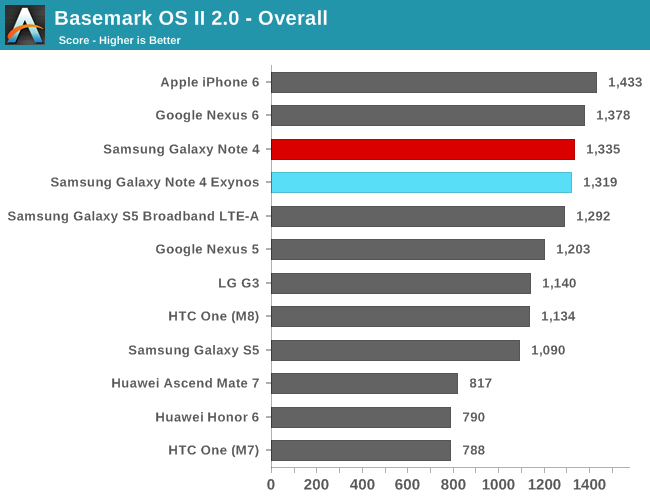 Due to the underwhelming graphics score, it brings down the overall result of BaseMark OS a bit beneath that of the Snapdragon version of the Note 4.

As part of our 2015 test suite we're introducing Futuremark's PCMark for Android into our mobile device reviews. PCMark is an overall system workload that uses Android's built-in libraries and APIs, a very common use-case that we find in a lot of Android applications. 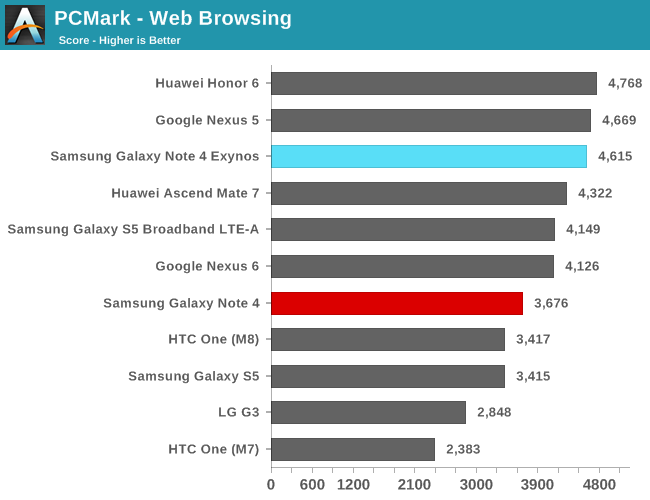 The web browsing test on PCMark uses a native Android WebView to display and interact with the web pages. It tests performance by measuring time to render pages, search for content (JavaScript performance), and time to re-render the page as images are altered.

Here we see the Exynos version again outperforming the Qualcomm Note 4 by a substantial amount. It's also interesting to see the Nexus 5 and Honor 6 that high up on the test, definitely a sign of how this is a system test rather than just a purely synthetic CPU performance test. 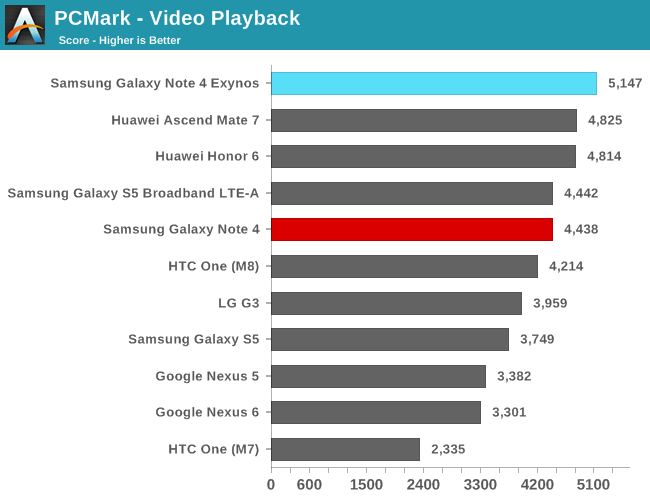 The video playback test uses the native Android MediaPlayer API to play back a 1080p H.264 baseline 4.0 video, with a variable target bit rate of 4.5Mbps at 30 FPS. What is measured here is the time needed to open the video samples, their average frame rates, and the seek time when skipping through the videos.

The Exynos is again at the top, outperforming all other benchmarked devices. Beyond testing the OS and API performance, this is also a test stressing the hardware as it tests the eMMC speed and the hardware decoder of the devices. We're seeing top notch performance from Samsung's device here as the video loads and seeks virtually instantly. I've seen excellent performance from Exynos hardware decoders ever since the Galaxy S2 and the Exynos 4210, which back in the day (as opposed to the competition) had no issues with even heavy 50Mbps streams. It seems Samsung is continuing that trend to this day. 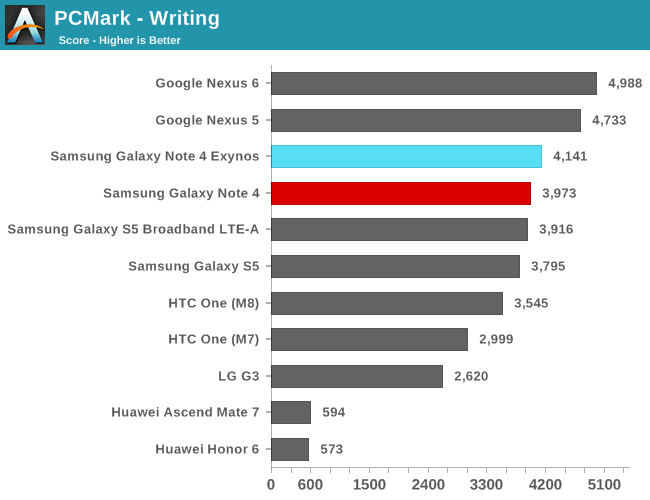 The writing test measures performance when manipulating a native EditText view. It loads, decompresses, and pastes two documents together into a large 200k character piece of text. This is then compressed into a ZIP and saved. Further text manipulation is done and the API overhead and performance is measured.

The Exynos has a slight edge over the Qualcomm Note 4, but they're both beat out by the Android 5.0 Lollipop Nexus 5 and 6 devices. I'm happy to see a test being able to measure general UI and API performance on Android as it's an aspect of device performance that was rarely touched upon.

As a side note, I've seen abysmal performance on my Huawei devices for this test. It seems there is some issue in EmotionUI that leads the Mate 7 and Honor 6 to lag behind by a considerable amount in this benchmark. 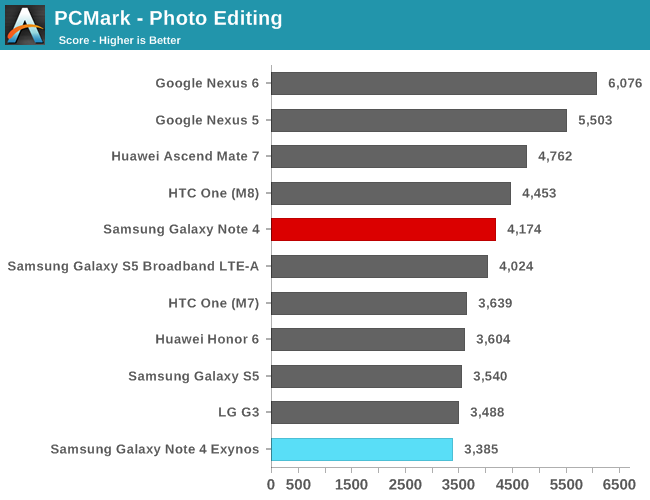 The photo editing test is a mix between API performance and both GPU and CPU performance. Image effects are applied via both the native effect API in Android as well as a RenderScript that tests heterogeneous processor performance (GPU and CPU). Additionally a Java library is used to test Java performance through processing filters that are computed on the CPU.

We see the Exynos performing last in this test-case, while our Lollipop devices lead the pack. It seems this is an issue with the OS libraries as the Mate 7, which also employs a Mali GPU, performs quite well in this test, pointing out that it's not a hardware performance limitation. 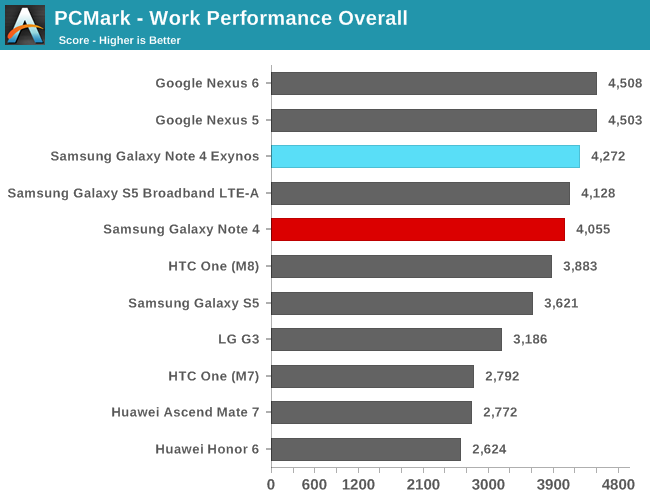 The overall work performance score for the Exynos Note 4 falls slightly ahead of the Qualcomm version. It will be interesting to see how the battlefield changes as more devices get updated to Lollipop; there's evidently a large performance boost to be expected as portrayed by our Nexus 5/6 numbers.

Overall, the Exynos's CPU is much ahead of the Snapdragon. This is not only seen in benchmarks but also real-world usage as the device is snappier and more fluid. Some people might notice microstutters on the Snapdragon version; Qualcomm is still relying on CPU hot-plugging for their power management. Hot-plugging is a Linux kernel operation that takes a CPU out of coherency and is a slow and expensive operation that forces the device to stop for a certain time. This overhead has been vastly reduced over the years as things were optimized in the Linux kernel, but it is still very much an unfavorable mechanic nowadays. Modern ARM Cortex CPUs now use their power collapse states via the CPUIdle framework, which avoids such issues.

Next let's inspect the graphics performance of the Exynos Note 4.