Finally, before diving into our look at Denver in the real world on the Nexus 9, let’s take a look at a few performance considerations.

With so much of Denver’s performance riding on the DCO, starting with the DCO we have a slide from NVIDIA profiling the execution of SPECInt2000 on Denver. In it NVIDIA showcases how much time Denver spends on each type of code execution – native ARM code, the optimizer, and finally optimized code – along with an idea of the IPC they achieve on this benchmark. 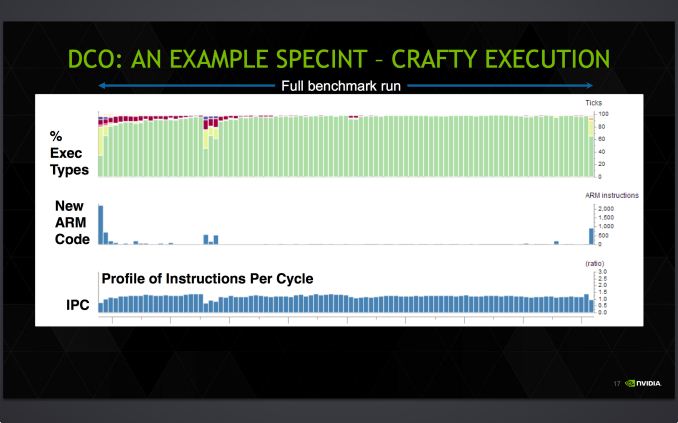 In this case the amount of CPU time spent on the DCO is never too great of a percentage of time, however NVIDIA’s example has the DCO noticeably running for quite some time before it finally settles down to an imperceptible fraction of time. Initially a much larger fraction of the time is spent executing ARM code on Denver due to the time it takes for the optimizer to find recurring code and optimize it. Similarly, another spike in ARM code is found roughly mid-run, when Denver encounters new code segments that it needs to execute as ARM code before optimizing it and replacing it with native code.

Meanwhile there’s a clear hit to IPC whenever Denver is executing ARM code, with Denver’s IPC dropping below 1.0 whenever it’s executing large amounts of such code. This in a nutshell is why Denver’s DCO is so important and why Denver needs recurring code, as it’s going to achieve its best results with code it can optimize and then frequently re-use those results.

Also of note though, Denver’s IPC per slice of time never gets above 2.0, even with full optimization and significant code recurrence in effect. The specific IPC of any program is going to depend on the nature of the code, but this serves as a good example of the fact that even with a bag full of tricks in the DCO, Denver is not going to sustain anything near its theoretical maximum IPC of 7. Individual VLIW instructions may hit 7, but over any period of time if a lack of ILP in the code itself doesn’t become the bottleneck, then other issues such as VLIW density limits, cache flushes, and unavoidable memory stalls will. The important question is ultimately whether Denver’s IPC is enough of an improvement over Cortex A15/A57 to justify both the power consumption costs and the die space costs of its very wide design.

NVIDIA's example also neatly highlights the fact that due to Denver’s favoritism for code reuse, it is in a position to do very well in certain types of benchmarks. CPU benchmarks in particular are known for their extended runs of similar code to let the CPU settle and get a better sustained measurement of CPU performance, all of which plays into Denver’s hands. Which is not to say that it can’t also do well in real-world code, but in these specific situations Denver is well set to be a benchmark behemoth.

To that end, we have also run our standard copy of SPECInt2000 to profile Denver’s performance.

Given Denver’s obvious affinity for benchmarks such as SPEC we won’t dwell on the results too much here. But the results do show that Denver is a very strong CPU under SPEC, and by extension under conditions where it can take advantage of significant code reuse. Similarly, because these benchmarks aren’t heavily threaded, they’re all the happier with any improvements in single-threaded performance that Denver can offer.

If nothing else it's clear that Denver is a benchmark monster. Now let's see what it can do in the real world.