The last item to look at is cooling performance and noise levels. I've already mentioned that the cooling appears to be much more capable than on the GT70, thanks to the use of two fans and radiators. This isn't just a case of the notebook generating less noise, as it tends to have lower temperatures as well. There are many factors at play of course, and the MSI GT72 (along with the GT70 before it) has an option for enable more aggressive cooling if desired, which tends to be much louder but keeps temperatures down.

With the GT72, MSI has a feature called "Shift" where you can switch via a keyboard shortcut (Fn+F7) between performance modes. The options are Sport (highest performance), Comfort (balanced), and Green (energy efficient). Each option tunes the fans and potentially other aspects of the notebook slightly differently. It doesn't appear to result in overclocking or anything of that nature, so mostly it's just minor tweaks to performance as far as I can tell. Let's get into the specifics of the thermals and noise, where we have enabled the Sport mode for testing; we also checked and found that the Green mode didn't result in any reduction in the minimum noise from the GT72, though it was less likely to ramp up fan speed in light workloads.

To put it simply, thermals on the GT72 are exceptional. Surface temperatures at idle ranged from around 23C to a whopping 26C on the top and bottom of the chassis, so there's nothing at all to say there. In our 100% stress test (running a game while simultaneously loading all CPU cores), the back portion of the system gets hotter, reaching a whopping 40C – and that was only right under the GPU. I've seen many gaming notebooks hit 45C or more on a few hot spots, so the GT72 is really doing exceptionally well. Most of the back portion of the notebook (on the top and bottom of the chassis) gave readings of 30-33C. As for the palm rest and front section, temperatures were mostly unchanged from idle, still registering just 24-28C. 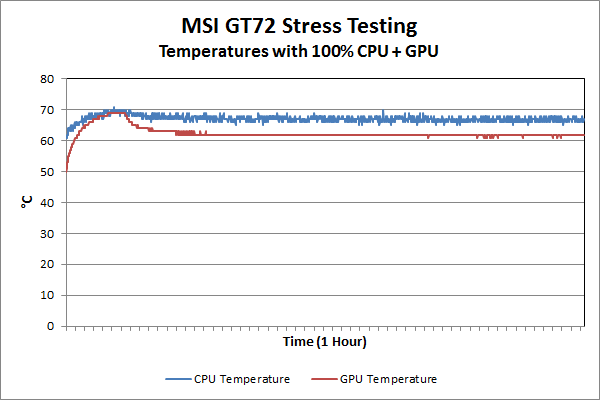 Even flipping over to the internal temperatures, there's nothing alarming going on. During a one hour stress test of the notebook (running a game while loading all the CPU cores), we reached the maximum thermals after about five minutes. At that point the fan speed started ramping up and temperatures actually dropped. At its hottest, the CPU only reported an internal temperature of 71C before leveling off at 66-68C after about 15 minutes. The GPU on the other hand maxed out at 69C in five minutes, but by 15 minutes into our stress testing it had leveled off at 62C.

Ambient temperatures during testing were around 22C (+/- 1C), so of course in hotter conditions things might get a bit warmer but this is still far and away the best result we've seen from a gaming notebook. Of course if the temperatures were contingent on loud fans it would only be a partial victory, so let's quickly discuss noise levels.

While the GT72 runs pretty cool, it doesn't generally qualify as a "silent" notebook. At idle and during light loads, the minimum fan noise from about 0.5m registered at 32.8 dB (in a room that had a noise floor of around 28 dB). Light workloads or slightly warmer testing environments could bump fan speeds up a bit, resulting in noise output of 35 dB. In other words, while it's not silent, it's still not very loud.

Putting a load on the system starts to change things a bit, but only if a GPU load is involved. We actually ran a 100% CPU workload for 30 minutes and the fans never had to speed up, with the system staying at 32.8 dB. Apparently having the two fans and radiators helping to cool the CPU really works wonders for pure CPU workloads. Firing up a game on the other hand will eventually result in the fans kicking up to higher speeds (and I'd assume higher ambient temperatures would also result in more noise).

We left a game running for a while to first check the noise levels for pure gaming workloads, and after 15 minutes or so the fans had stabilized at 36.8 dB. That's a pretty amazing result and even after more than an hour the fans just weren't working all that hard. We then fired up a CPU load while running the game, and finally the fans had to do some work, eventually settling in at 43.1 dB.

The MSI GT72 also has a feature where you can tell the system to prefer lower temperatures at the cost of increased fan speed. The third button on the left of the system will engage turbo cooling, and the result is that the fans will ramp up far more quickly. During our gaming tests, engaging turbo cooling quickly resulted in system noise of 45 dB, and our worst-case stress test gave us a maximum noise output of 45.7 dB. That's still not too bad, and it really takes a lot to get the GT72 to reach that point – basically, it only happens when the CPU and GPU are both drawing close to their maximum TDP.

Given the stellar noise and temperature results, we of course wondered if there might be some throttling going on. We monitored our 100% stress test for an hour and found that CPU and GPU clocks basically held steady – the CPU was at 3.3GHz while the GPU locked in at 1126MHz. If there's any throttling occurring, it would have to be happening in a way that avoided detection by my clock speed logging tool, and during all of my testing I didn't notice anything suggesting that might be happening. Again, higher ambient temperatures might change things a bit, but I suspect you'd have to be in an environment of more than 38C (100F) before you'd really have any difficulties.