While the display is important on a smartphone, by virtue of its sheer size tablets seem to have a more critical need for a good display. With a tablet there’s a great deal more potential for usage models such as drawing/sketching and photo/video editing. In addition, reading books or watching videos is far more common on a tablet, which means that poor resolution, response time, and/or contrast can be quite visible and painful to live with. In order to test this, we use our standard suite of tools, which include SpectraCal’s CalMAN 5 and X-Rite’s i1Pro2 spectrophotometer to make sure that our color readings are as accurate as possible. Colorimeters in practice have varying levels of color accuracy due to their design, and as a result these are only used to verify contrast and gamma curves. As previously mentioned, we test against sRGB gamut as it’s the de facto standard for displays and web content. It’s definitely not a perfect standard by any means, but until a wider gamut becomes standard it’s the one to test against.

Before we get into the objective tests though, there’s a lot of talk about that isn’t easily measured. On the simpler side, the display resolution where I can see a noticeable difference when compared to the iPhone 6 Plus and similarly high resolution devices. The 2048x1536 resolution is nothing to be ashamed of, but when stretched to a 9.7 inch display this means that it’s relatively easy to notice pixelated areas on various curves. At a normal viewing distance though it’s not an obvious issue and I didn’t have any issues with eye strain. There could be some value to going to higher resolutions for the iPad Air 3, but barring some major breakthrough in TFTs or backlight technology such a move would incur a significant cost in power due to losses in backlight efficiency as the LEDs approach maximum power draw. 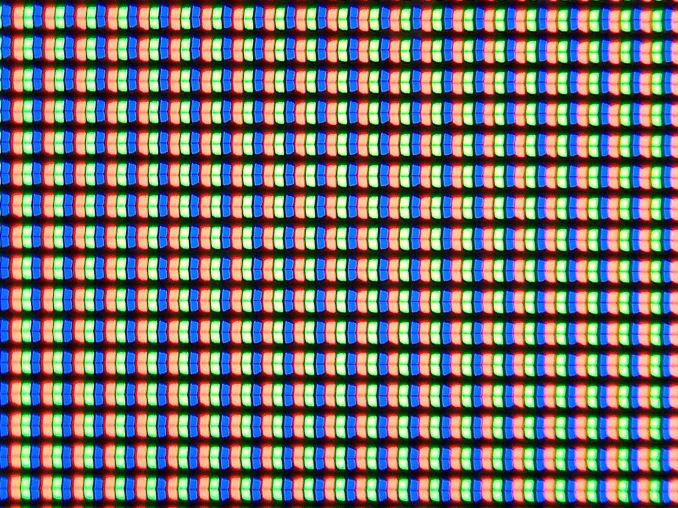 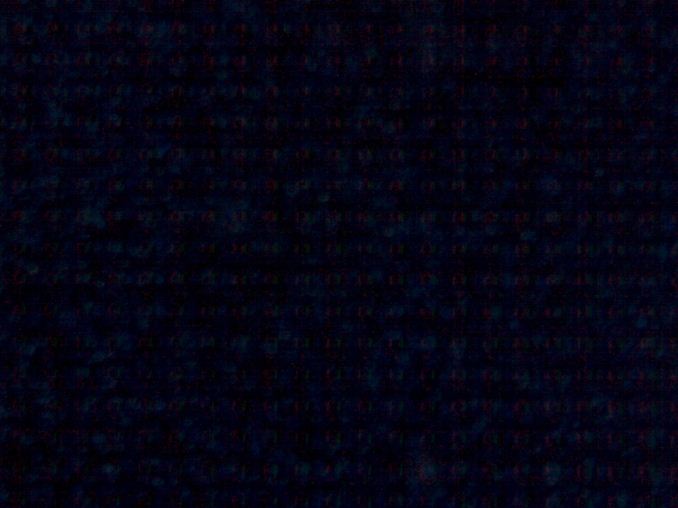 Speaking of LEDs at maximum power draw, outdoor visibility is often a critical use case. While we focus on maximum brightness, in truth this is really just one part of the equation as high reflectance can effectively erase all of the gains that one can have from higher brightness. Unfortunately, I don’t have the proper equipment to objectively test this, although the test will be ready for next year. In practice, I can definitely see a difference in mirror/specular reflections on the tablet when comparing the Galaxy Note 4, although it’s harder to tell when comparing against the iPhone 6. I can definitely see a difference in what is reflected though, as there’s a noticeable purple hue to white reflections in certain angles which could be a magnesium fluoride coating similar to what one might find on glasses or camera lenses. There’s no obvious flaring issues though, and in practice I don’t see any real degradation of clarity. The improvement from the iPad Air is dramatic, especially as the addition of lamination makes the display noticeably closer to the glass and reduces the reflections that result from the air gap. This change also helps with the viewing angles on the iPad Air 2, which were already quite good with the iPad Air due to the chevron-shaped subpixels. As I said with the iPhone 6 review, this helps to ensure that there's much less color shifting when changing viewing angle, although there is a noticeable shift towards purple in some viewing angles which is mostly noticed on pure black but hard to see in any other case. 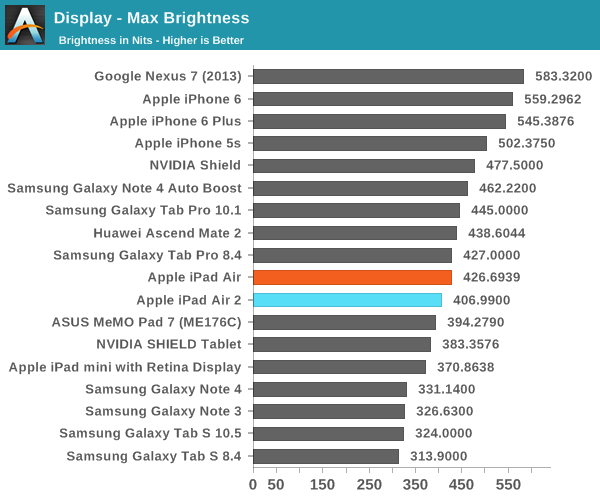 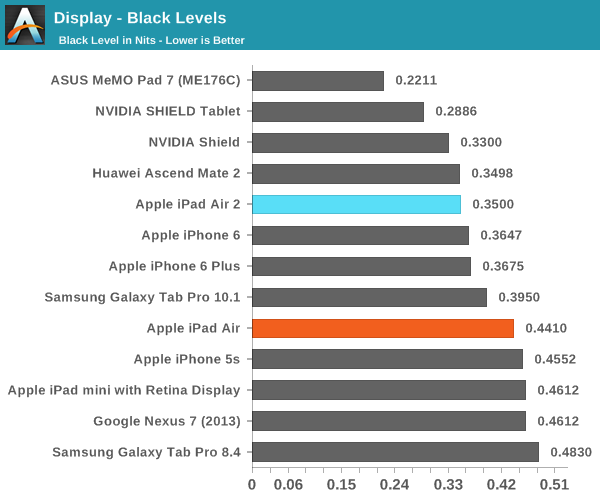 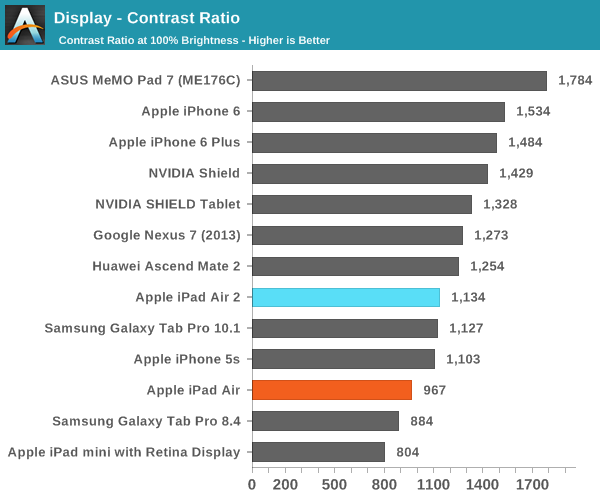 On the actual display characteristics though, we don’t see too much of a difference. Brightness and contrast are quite close to the original iPad Air, which suggests that we’re looking at the same exact display, although production variances may have an effect on things. 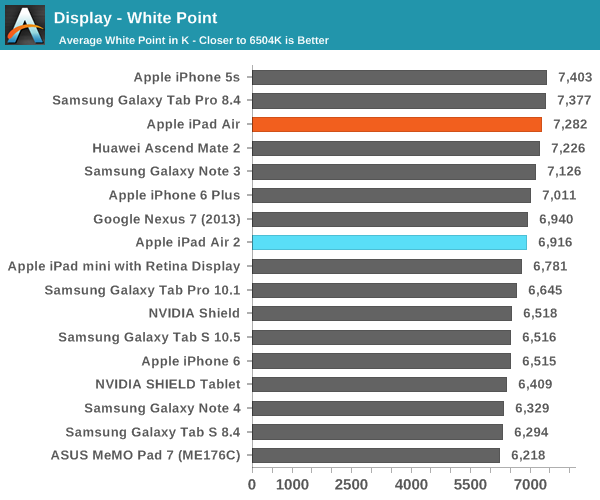 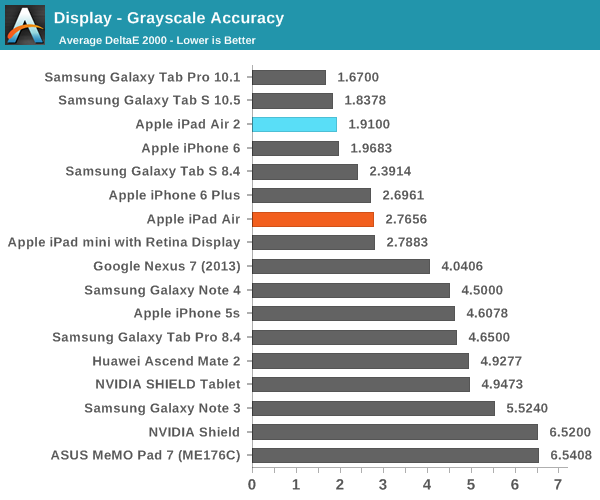 In grayscale, we see some level of improvement to the calibration, although it’s hard to tell whether this is the product of production variance or some level of improvement. In practice grayscale tones are definitely well-rendered, and the blue tint isn’t really significant here. There’s really nothing else to be said, as the visible difference from a reference monitor would be difficult, if not impossible to spot. 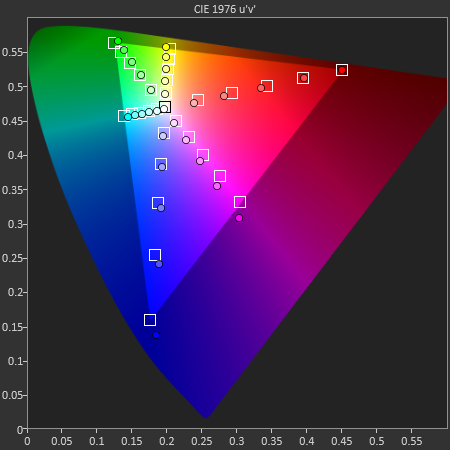 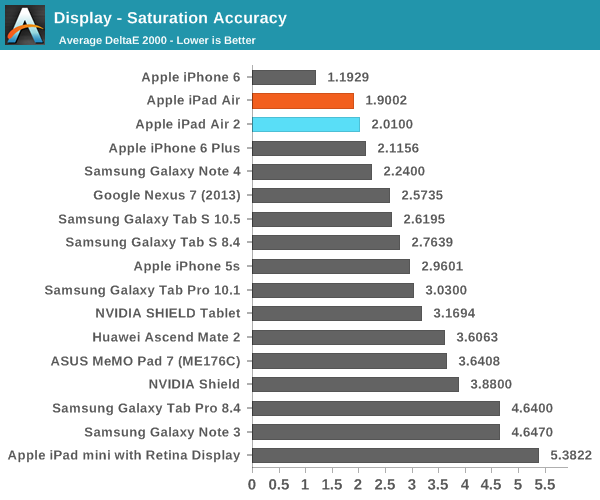 For the saturation sweep, which is the next aspect under test we see a similar pattern. While there’s some oversaturation on the blues, there aren’t any other significant issues. The display on the iPad Air 2 is probably similar, if not the same type as the one we’ve seen in the iPad Air as both have the same gamut. 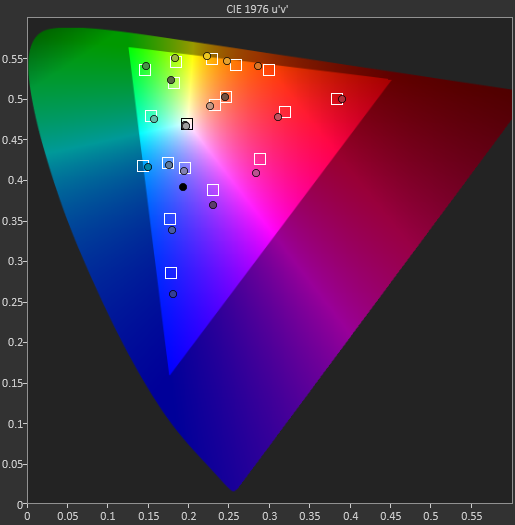 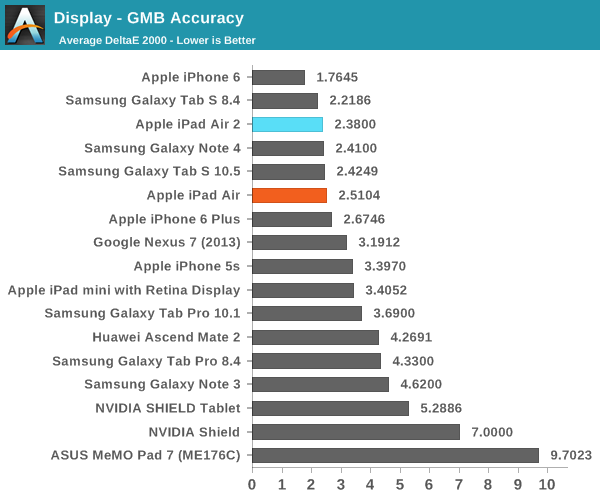 On the GMB ColorChecker, we can generally pick out any issues with display calibration that the saturation sweep won’t show as this test emphasizes hue comparisons along with some grayscale testing. In practice, the iPad Air 2 doesn’t have any issues here as evidenced by the low average error. While there’s noticeable blue shift on some of the hues this shouldn’t be a major problem.

Overall, the quality of the display calibration in the iPad Air 2 is pretty much as good as it gets. While I can name some problems, they’re all minor at best and effectively nit-picking. The fact that I can say this about a tablet display is definitely good news for the state of the industry, as things haven’t quite devolved into a race to the bottom with corners cut in every possible area.

There are some issues with the display overall in terms of peak luminance, but these are likely to be due to the larger display size. These differences when compared to smaller smartphone displays are likely to be due to issues with scaling of the thin film transistor technologies common in smartphone-size displays to tablet-size displays as LTPS backplanes become increasingly expensive to make due to the higher variability involved in the process when compared to IGZO and amorphous silicon processes. Unfortunately, an IGZO backplane seems to gate performance in some key areas as we don’t quite see the levels of brightness and contrast that we do on the iPhone 6 despite lower pixel density.