While hardware is important, the tablet ultimately needs compelling software in order to justify its place. Apple has done a great job of using the display’s extra real estate, although areas like Springboard are a bit lacking in information density when compared to the iPhone 6 Plus. Unlike the iPhone 6 Plus which usually only gives a multiple-pane view in landscape, the iPad can present more information all the time. While this may seem to be an artificial distinction, it’s really the 4:3 aspect ratio that improves information density for both orientations. 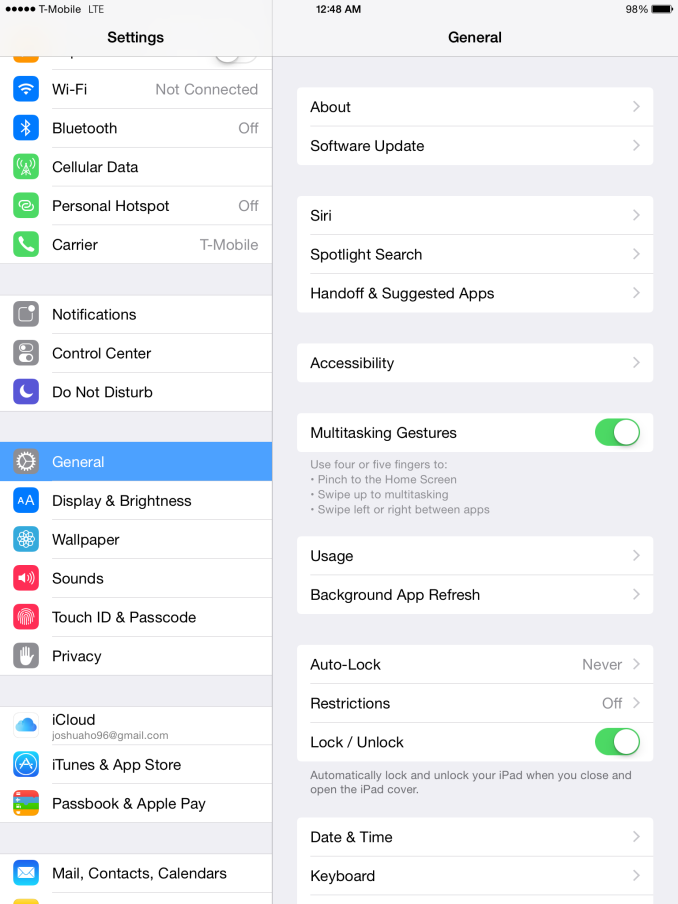 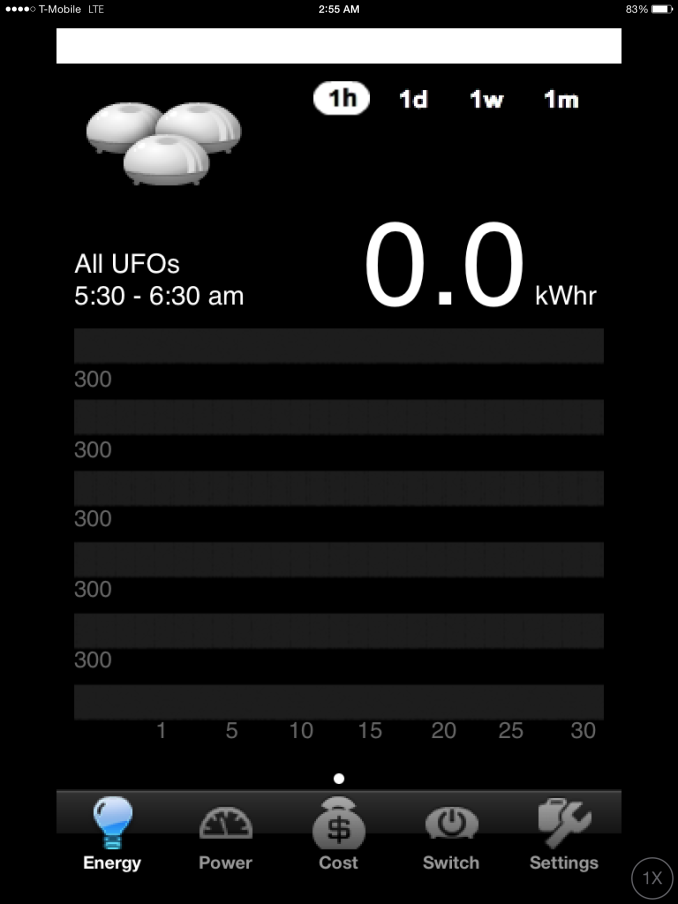 More notably, applications in the app store seem to be universally adapted for the iPad instead of being a stretched out iPhone version. It’s likely that this is because any iPhone-only application is a direct scaling rather than any proper interpolation, so at 1x mode the application is comically small and at 2x the application often looks horrific due to aliasing and upscaling artifacts. Both modes leave large levels of unused space in the display, so there’s a strong impetus to make a proper tablet application. The multitasking gestures continue to add to the tablet's functionality as well, which can be even quicker than normal multitasking. This is also helped by the use of two gigabytes of RAM, which noticeably reduces the amount of times that applications are kicked out of memory in my experience. As AArch64 can increase memory requirements it seems important for future iPhones and iPads to all ship with at least two gigabytes of RAM. 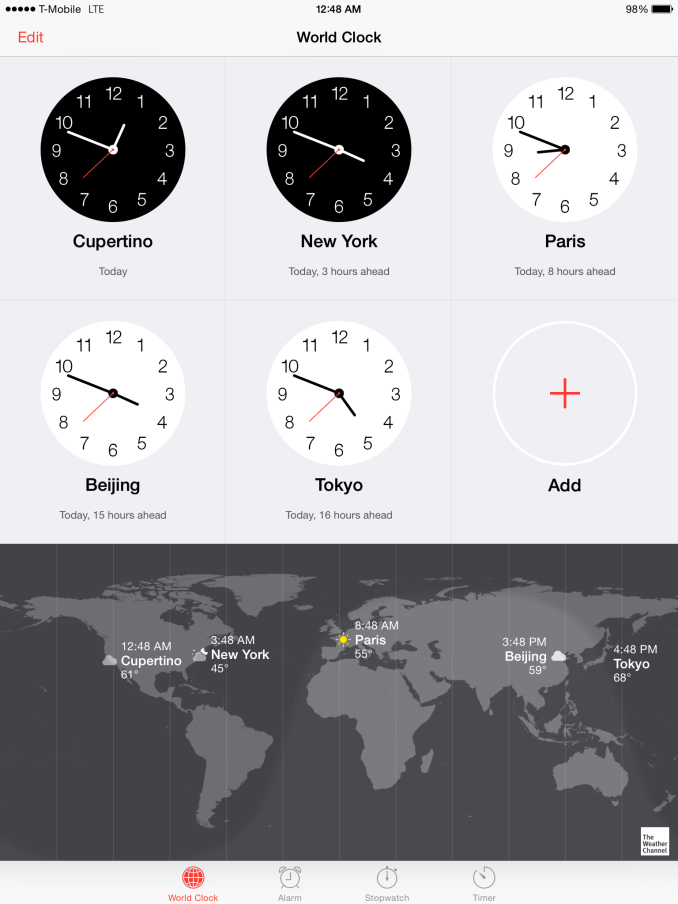 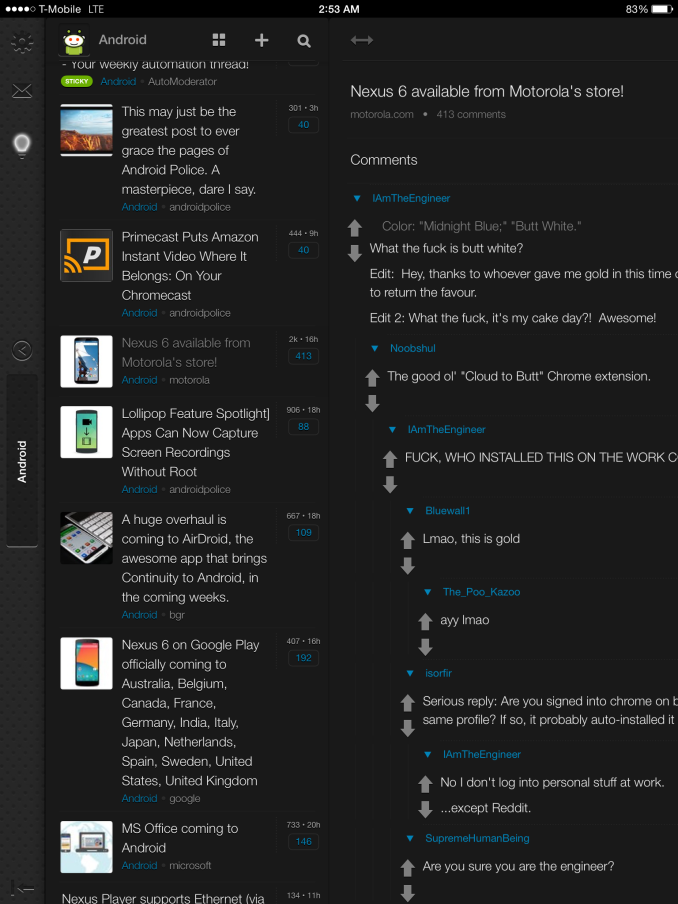 For the most part, these are already advantages that iPads have had for a while, so none of this really changes when compared to most other tablets, which have generally suffered from a relatively poor breadth of applications designed to take advantage of a larger tablet display. The one significant software feature to talk about here is TouchID, even though this is a hardware-driven feature. Similar to my experiences with TouchID on the iPhone, TouchID on the iPad makes a lot of sense. While there’s no NFC feature for Apple Pay, the same system works for online purchases which has a great deal of potential for any applications that utilize Apple Pay. The launch of iOS 8 also means that TouchID can be used as an alternate form of authentication for any application that uses the appropriate API, which is definitely nice as well. Of course, for basic unlock this system continues to work incredibly well, to the point where it’s often possible to accidentally unlock the device when turning it on with the home button. 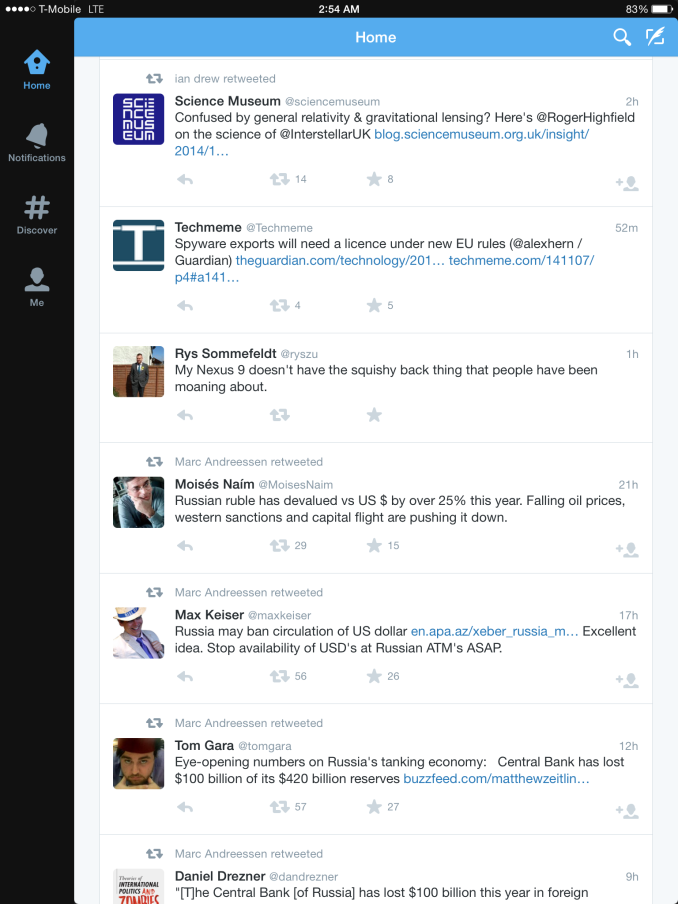 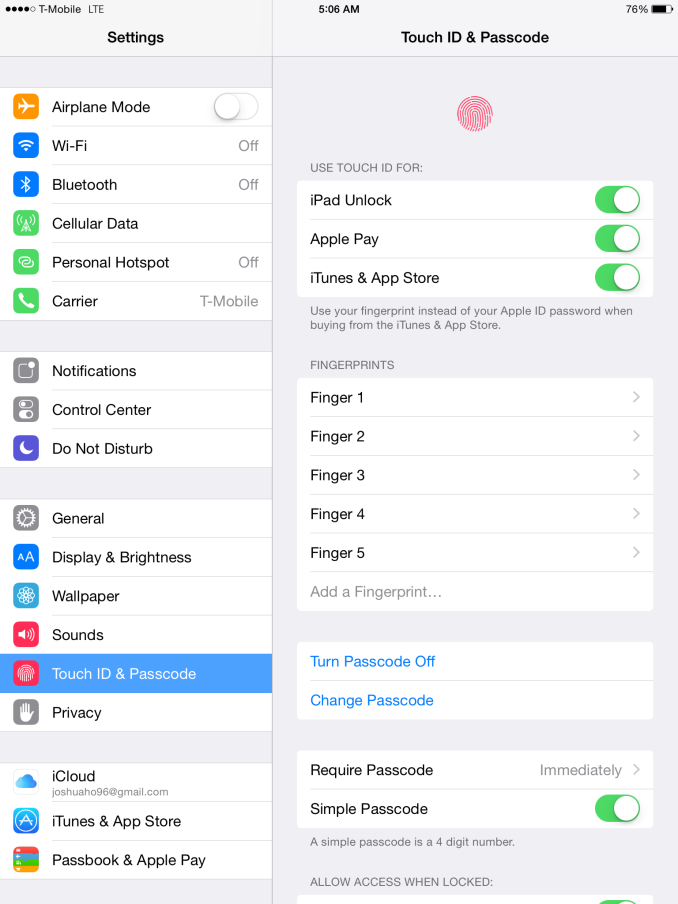 However, there’s not much else to talk about. Unfortunately, while Apple has done a good job of developing the tablet it feels like there’s a lot of potential for new applications and other usage models that haven’t come to fruition. While the stylus is often seen as a negative for user experience, I suspect that the iPad would have for more value if a good pressure-sensitive stylus was included for note-taking and similar use cases. In addition, the lack of a proper multi-window system definitely detracts from the potential for the iPad to take on a productivity role. While these are all things that Samsung has done for the Galaxy Note line, these features aren’t really as well executed as they need to be for good user experience which leaves room for Apple to innovate in this area. It seems fully possible for an iPad to replace a ~20 mm thick convertible tablet for productivity and note taking, but proper development of these ideas hasn’t quite happened.

Unfortunately, as a function of the iPad’s size I find it hard to integrate into daily use. For the most part I don’t find myself missing the extra screen size when compared to a phablet like the iPhone 6 Plus, and this is likely to be Apple’s biggest issue as the iPhone 6 Plus can give much of the tablet functionality while still remaining relatively compact. While I’d be willing to put up with the extra size if there was compelling functionality that I wouldn’t be able to get on another formfactor, it feels like this uniqueness is lacking in the iPad. This doesn’t mean that there isn’t value to the iPad formfactor as there is a sizeable population of people that effectively use the iPad as their primary computing device, but for general browsing and comparable tasks I’ve never felt limited by the relatively small display of a phablet or smartphone. This means that there’s a significantly higher bar for utility, which is really the source of my concern. While the iPad’s software experience is excellently executed, after multiple generations it seems to be time to push in new directions for utility.