For some reason the name Athlon XP 2000+ just seems that much more intimidating than last month's 1900+. Over the past few weeks we've heard similar opinions from AnandTech staff members as well as readers in general; although the Athlon XP performance ratings caused us to cringe slightly at the launch of the processor, the marketing strategy does seem to be working. Even among the most die-hard tech heads, the new XPs are rarely referred to by their clock speeds.

The naming system has obviously not been misleading from the performance perspective as AMD has generally been overly modest with their performance ratings as we've shown countless times in previous reviews. It seems as if AMD has definitely learned a lot from the Intel-way of marketing processors and although we do have our issues with the naming system we must give credit to the Athlon XP series as somehow feeling like the strongest show of AMD branding and marketing to-date. 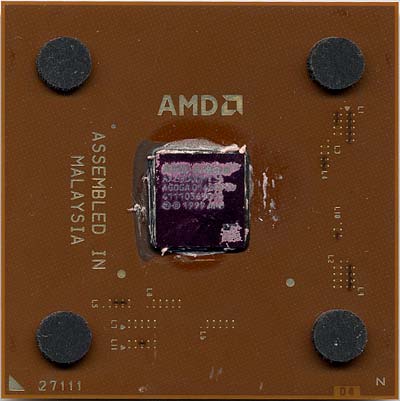 But enough about marketing, now onto the processor itself. The Athlon XP 2000+ is based on the same Palomino core that debuted back in June 2000. Just like all of the other XP processors the 2000+ features a new organic based packaging which will definitely come in handy for AMD's eventual move down to a 0.13-micron process although it is of little use now. An interesting nonperformance related fact is that by the end of the first half of 2002 all of AMD's organic packages will be dyed green instead of brown.

The 2000+ carries a clock speed of 1.67GHz with a 12.5x clock multiplier. Most motherboards don't properly implement this clock multiplier so you'll have to make sure you update your BIOS in order to accommodate the new processor. From what we've seen, the majority of the Taiwanese motherboard manufacturers released BIOSes with support for the new 2000+ in the past month or two.

The CPU itself still runs at a 1.750V core voltage and draws an average of close to 36 amps of current, dissipating 62.5 - 70W in heat. The processor is definitely very hot which is one reason why AMD's transition to their 0.13-micron process needs to occur soon. According to AMD, their Thoroughbred (0.13-micron) Athlon core will begin shipping by the end of this quarter. We can extrapolate that to mean that retail availability is still on track for the first half of this year.

The rest of the specs of the processor remain unchanged from all of the other members of the Athlon XP line, for more information on those processors and the Palomino core you can have a look at some of the previous articles we've done on those topics:

AMD Athlon 4 - The Palomino is Here