In our original review of the 845 chipset we praised the design of the solution; even though it was paired with performance-crippling PC133 SDRAM, the chipset was easily the most sophisticated core logic ever to come from Intel. Even today, over three months later, we still feel the same way about the chipset and the boards that use it. The eleven 845 boards we rounded up continue to run just as well as they did on day 1.

The chipset used in these boards is identical to that used on the PC133 845 boards. In fact, all the motherboard manufacturer has to do is implement the DDR support on a board level and they can reuse the same MCH chips. Obviously the implementation is a bit more complicated than just plopping down 184-pin DDR SDRAM DIMMs as there are many electrical considerations to take into account but from a manufacturing standpoint it's relatively easy.

The 845 MCH supports DDR200 and DDR266 SDRAM running at 100MHz and 133MHz respectively. This is contrary to original roadmaps that showed only DDR200 support for the platform. Regardless of which operating frequency is used the chipset only supports two DDR SDRAM memory slots but with a maximum of 2GB of memory. Since 1GB DDR SDRAM modules are not too common today, it will be difficult to hit that limitation. As you'll see from this roundup, a couple of manufacturers took it upon themselves to violate Intel's specs and outfit their boards with a third DIMM slot. Controlling the DRAM frequency is done through the BIOS with, interestingly enough, virtually the same option on every single motherboard as can be seen below: 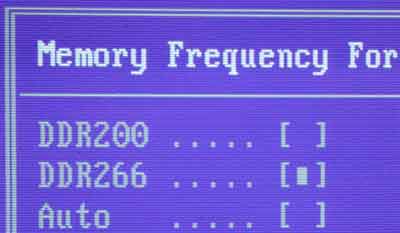 Intel's specifications have historically been much tighter than those of competing companies and the justification has usually been that Intel must ship platforms for the majority of the market and thus reliability is even more important. Their motives were solid and the end result in this case is yet another stable platform.

The performance of the chipset is generally within 5% of the i850 depending on the application being used. Remember that even with DDR266 being used, the i845 chipset still only provides around 50% less bandwidth than the i850 with its dual channel PC800 RDRAM memory bus. This is clearly Intel's shot at the mainstream market and even some enthusiasts may prefer to take the performance hit and make up for it by equipping their systems with more memory courtesy of DDR SDRAM's lower pricing. Again, we'll leave performance until the next article but that should give you an idea of the caliber of performance. It won't win in all the benchmarks, but you'll be hard pressed to notice a performance difference in most situations.