For the most part, the iOS 8 experience on the iPhone 6 Plus is functionally identical to what you get on the iPhone 6. However, some aspects of the iPad software are also present. For example, it’s possible to rotate the home screen in any direction desired, so it’s fully possible to navigate between home screens with the phone upside down. While not quite like the iPad, there are split views in certain applications and I’m sure that this view will become common as applications are optimized for the iPhone 6 Plus. For the most part, this really helps with taking advantage of the larger screen real estate. This difference also helps make the iPhone 6 Plus feel like the combination of a tablet and phone that it should be. While Reachability is a great feature to have in a pinch, it's really not a replacement for a proper phone if one is looking for easy one-handed use most of the time. 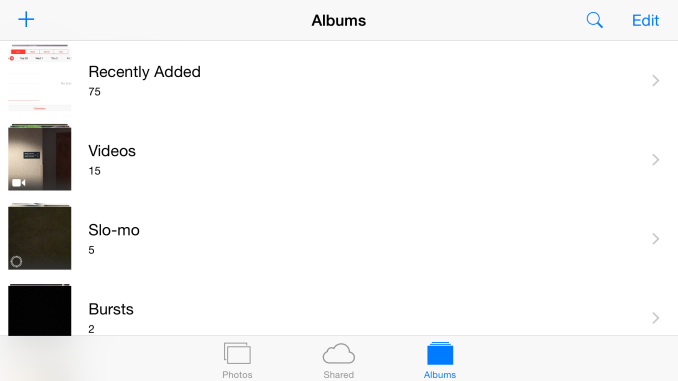 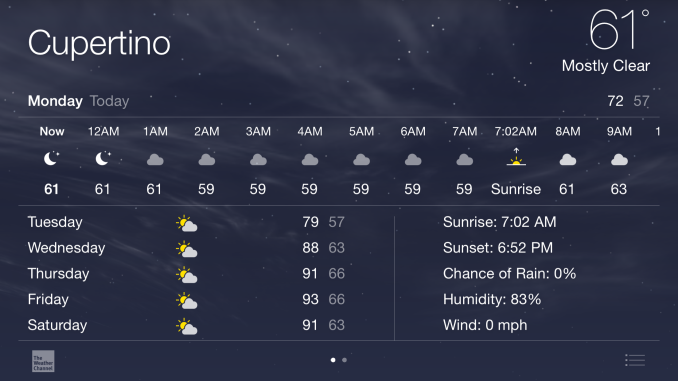 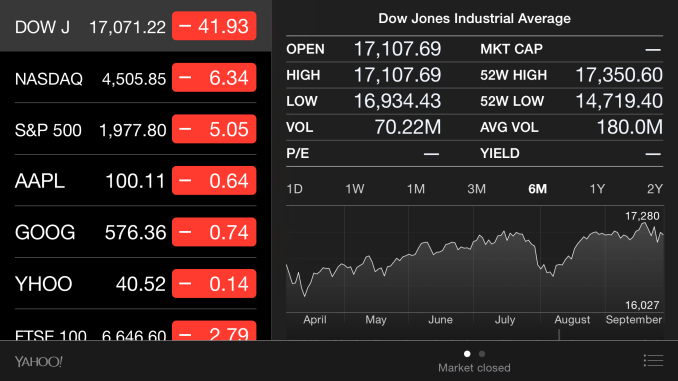 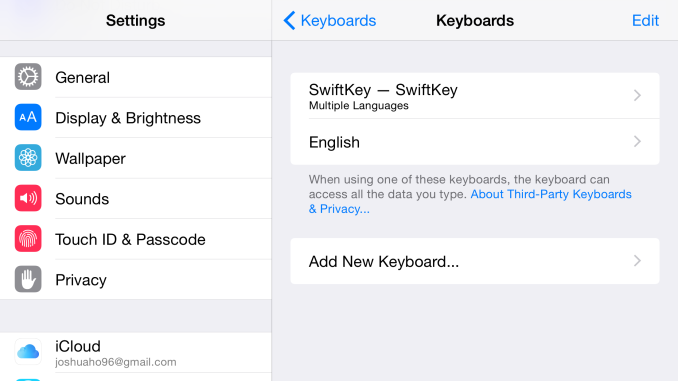 The one issue that I found was that the stock keyboard was ergonomically difficult to use when in landscape, as seen below. While it may be simpler for first time users, I suspect much less frustration would result if all of the extra functions were moved to the center of the keyboard and a split layout was used for the main keys, similar to the iPad. 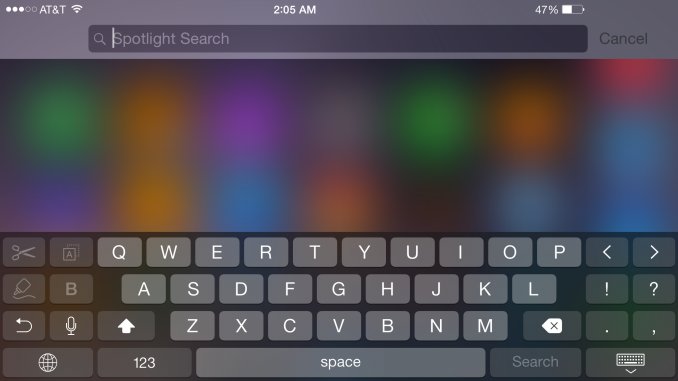 However, outside of these dedicated applications the iPhone 6 Plus is really does provide a better experience. All of the advantages that come with a tablet such as improved video, photo, and web experiences along with easier content sharing are present in the larger 6 Plus as it sits right around the point where these benefits are clearly tangible. This becomes a major selling point of the device. While the software differences are definitely smaller than what we see on the Galaxy Note line, Apple has managed to do enough that most won't notice a significant difference one way or another.

I started this review by listing the differences that the iPhone 6 Plus has when compared to the iPhone 6, and those are really the key points so it's worth going over again. I'm starting to sound like a broken record on this, but for the areas shared with the iPhone 6 it's critical to go back to the iPhone 6 review to understand things like the A8 SoC, performance, and display. 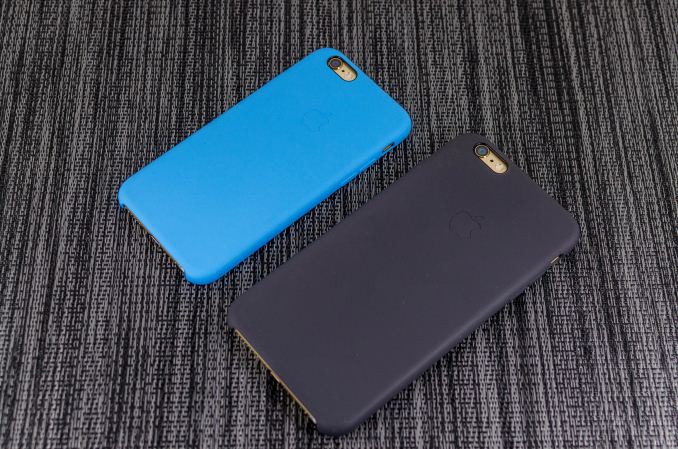 The first key point is the display size. This is fundamentally the most important difference between the iPhone 6 Plus and iPhone 6. While there are other differences, none of them matter when compared to size. I personally found the iPhone 6 to be right around the ideal balance between screen size and one-handed usability. If you're looking for that combination, then the iPhone 6 is really the better choice, even if it doesn't get everything that the iPhone 6 Plus has. However, those that don't care about using their phone with one hand on a regular basis may find the iPhone 6 Plus starts to be a much more appealing choice. 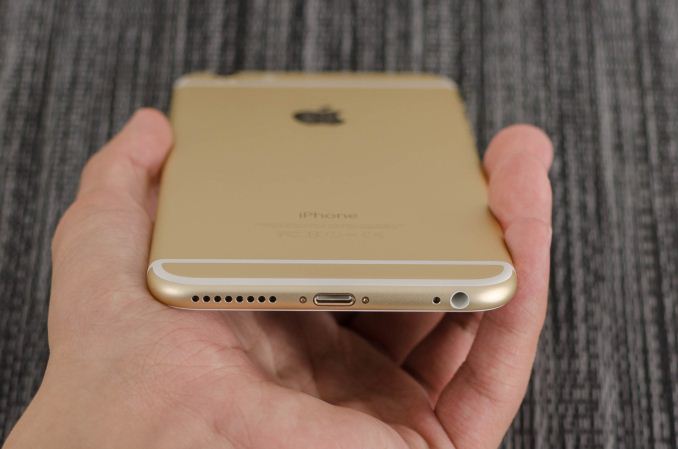 There are really a few key advantages of the iPhone 6 Plus over the iPhone 6 once the size issue is settled. The first is the camera. While rarely active, optical image stabilization has made it possible to achieve far better photos in almost any situation where longer shutter speeds can be used. Apple has really made it painless to take long exposures, as even a quarter of a second doesn't incur significant motion blur due to the multiple exposures combined for each photo. Even though this seems to be the only application of OIS, Apple has managed to make the overall camera experience better in a way that no other OEM has.

The next advantage is battery life. While the iPhone 6 has competitive battery life, the iPhone 6 Plus manages to extend Apple's lead while also maintaining the same thin and light profile that we see on the iPhone 6. The difference in battery life can be quite significant, especially in compute-bound cases where battery life scales mostly linearly with battery size. 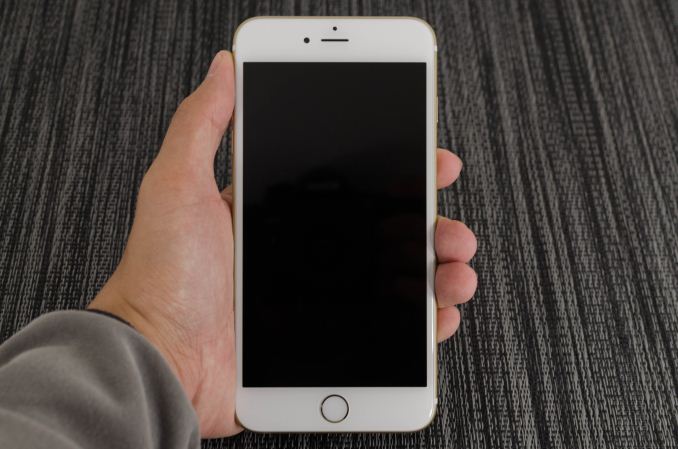 The final advantage is resolution. While the iPhone 6 Plus does have a bigger display and all the advantages that come with the bigger screen, Apple has also provided an even higher pixel density than before with the iPhone 6 Plus. It's certainly not as incredibly high as what we see in phones like the LG G3, but the improved pixel density is clearly visible. There are performance trade-offs in GPU-based benchmarks, but otherwise Apple has managed to make this bump in resolution compromise-free. I definitely notice the improved resolution, but this is a mostly subjective area that requires personal experience to judge whether the higher resolution has value.

Overall, the iPhone 6 Plus is a great phone that builds on the foundation of the iPhone 6. Whether it's right for you will be based primarily on whether you want the larger display or not. Once again, it's pretty easy to see the strength of Apple's integrated hardware and software approach as it's only a matter of time before most applications take advantage of the iPhone 6 Plus' additional screen size. However, comparisons between the iPhone 6 and 6 Plus are mostly pointless as they fall into distinctly different categories with different target audiences. There's also relatively little value to testing the iPhone 6 Plus against the Note 3 as this would give the iPhone 6 Plus a massive lead due to differences in time of launch. The iPhone 6 Plus must be compared to the Galaxy Note 4, which looms large on the horizon as Samsung has consistently succeeded in holding on to their first-mover advantage in the phablet market. If you have to buy a phablet now though, the iPhone 6 Plus is the best one available.