The X99 SLI Plus is the cheapest X99 model in our initial review at $230, coming in at just over half the price of the X99-Deluxe. Despite the large price difference there are some similarities from both products. The aesthetics of a motherboard has been a common battleground in recent generations and boards like the MSI and ASUS in this regard hit the nail on the head when answering calls for sleek designs that look polished and not too forced. 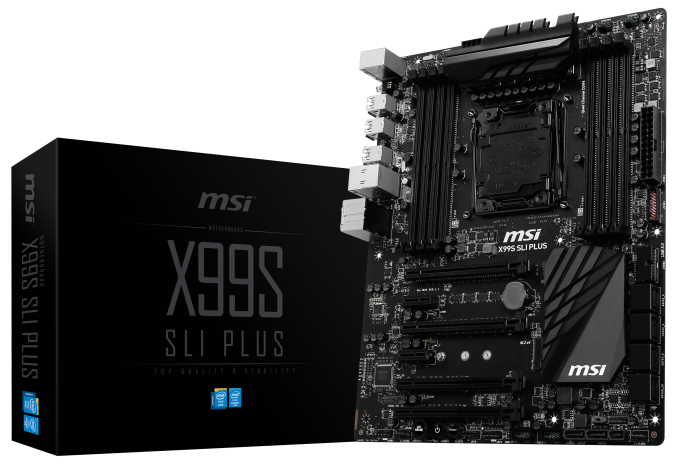 At $230, it is obvious that MSI skimps on a few details. We are limited to 3-way multi-GPU setups, we get a single network port (Intel I218-V) and the audio codec is a Realtek ALC892 solution. While we do get 12 USB 3.0 ports total, four on the rear panel are behind a VIA 4-to-1 controller, which is one of the cheapest cost-per-USB solutions available. On the plus side, SATA Express is here, and the M.2 slot can feed off of the CPU for a full 32 Gbps bandwidth if needed. M.2 is unfortunately limited to a maximum of 2280 sized devices however.

MSI did miss a trick slightly by not theming the BIOS and software packages in black similar to the motherboard, but MSI has a nice BIOS/software combination in general. The BIOS is growing on me as a user, especially as MSI seems receptive to advice on how to make the BIOS better. The software is still propped up by Live Update 6 as the best update tool available, however offering 2.1 volts as an overclock is a little absurd and needs to be adjusted.

Stock performance on the MSI X99S SLI Plus is near the top of the chain due to the aggressive way it implements MultiCore Turbo. In the system benchmarks it had a high power consumption under load and poor audio characteristics, but came top in DPC Latency and stripped POST times. Overclocking results were average, although the deficit in performance when overclocked is alarming – overclocked to 4.4 GHz, one of the other X99 motherboards scored similar when overclocked to only 4.2 GHz. This indicates there might be an efficiency issue somewhere along the line, though it is difficult to point the finger at either the BIOS, the software, or something fundamental at the hardware level.

The strength of the MSI X99S SLI Plus lies in the sleek design combined with the low price point. It forms a substantial line in the sand for any X99 system builder, and is very attractive to those who are more budget conscious and not keen on overclocking. For anyone wanting to dabble in the 6-core domain before putting down some serious money, pair it with an i7-5820K and take it for a spin.