Aside from the announcement of their new Gaming division and the release of the RGB series, Corsair is also introducing a new software for their input devices, the Corsair Utility Engine (CUE). The software is split into four main sections: Profiles, Actions, Lighting, and Settings.

We will start with the profiles section that, as the name suggests, allows for the programming of profiles and modes. Modes are like sub-profiles, as they can include every option a full profile does; the only difference is that you can set the profiles to start automatically once a specific program is launched, but you cannot do the same for modes. As an example of the potential usage, you can have the keyboard to switch into a specific profile when a game launches and still have several keyboard modes programmed in that profile for in-game switching. 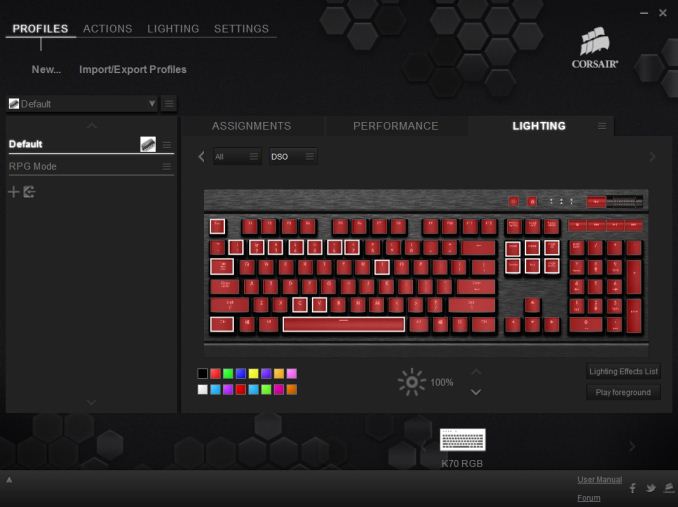 When programming a mode, the user can access three major tabs: Assignments, Performance, and Lighting. The Assignments tab allows for the programming or remapping of every key on the keyboard, including the media keys. The Actions List button brings up all the actions that the user has programmed (macros, timers, etc.) and they can be drag-and-dropped on any key. Keys can also be repurposed to switch modes and/or profiles.

The performance section is rather dull, as the user can only specify what actions the keyboard lock key will block. In contrast, the Lighting section is very complex. In this section you can program the lighting of each key individually. It's also possible to create key groups and assign lighting effects to individual keys, groups of keys, or the entire keyboard.

Fifteen colors are available at the bottom-left side of the tab for quick assignment, and these can be configured by simply right-clicking on them. The user can select any of the 16.8 million colors of the RGB scale. There is also an option to select a color from your screen, which is pretty neat, but we found it to be buggy for the time being (sometimes it works, sometimes it does not).

Another option is to add "Type Lighting" into a profile. As the name suggests, this mode will cause every key to play a programmable visual effect when actuated.

The Actions section allow for the programming of many advanced options, such as macros, timers, and even mouse movements. The actions programmed here can be inserted into keys via the assignments tab. There are eight different categories of advanced actions: Macros, Text, Keystroke, Shortcut, DPI, Timer, Mouse, and Media Control. The simplest are the Shortcuts and the Media Control sections. As the names suggest, Shortcuts will allow a single key to launch an application and Media Controls are the eight most common playback and volume control options. 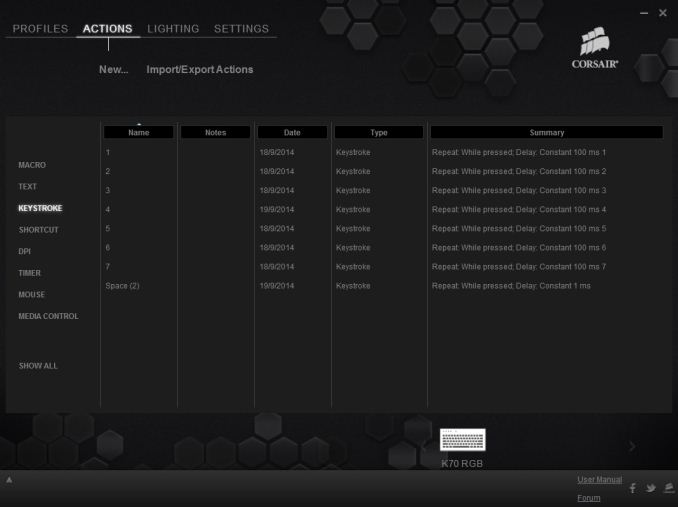 The macro programming capabilities of the software are surprisingly good. Aside from the keystrokes and delays, the CUE software can also record the relative mouse movements and mouse clicks. Unfortunately, it cannot record the absolute mouse position at the time of this review, meaning that macros cannot be programmed to click on specific coordinates on the screen regardless of the current position of the pointer. This however may be introduced into a future version of the software. There are more options, such as the ability to set a macro to terminate and/or repeat the Macro under specific conditions and the option to add a second macro to start after the current macro is finished.

The Text and Keystrokes sections are less complicated. In the Text section, the user can enter bodies of text that will be typed once the specific key has been pressed. These actions are useful for the quick insertions of common chat messages, signatures, etc. The Keystrokes section can be used to create keystrokes using single or multiple keys (e.g. CTRL+C, Shift+CTRL+X, etc.). It is very similar to the simple remapping section, with the exception that the user can program the actions to repeat and even adjust the delay between the repeats. This can be especially useful in games when "rapid fire" by simply pressing a key is not allowed. Using Keystrokes it's possible to circumvent this, saving gamers from having to hectically press a button for the rapid repeating of the action.

The DPI section is not complex but it certainly is very interesting. The CUE software can adjust the DPI resolution of your mouse in multiple ways, allowing the switching between DPI stages or the initiation of a temporary "Sniper mode". This section however is not compatible with all mice and will most likely be available only to those using a Corsair Gaming mouse.

The Timer section allows the user to program timers that can play sounds, initiate lighting effects, or execute other actions (e.g. macros) once the countdown ends. The minimum resolution of the countdown is 1 second. Finally, the Mouse section allows the remapping of the keyboard's keys to emulate simple mouse clicks and scrolling. We should also add that a lighting effect can be added into each action and can be set to start when the specific action initiates or ends.

In the Lighting section of the CUE software, the user can program specific lighting effects than can then be used with individual keys or groups of keys, or to be used when programming actions. There are four main effects: Solid, Gradient, Ripple, and Wave. Solid and Gradient effects can be used on individual keys but the Ripple and Wave effects require groups of keys, although they can still be linked to actions. The minimum effect time is one second, but there are ten subdivision when programming a full effect, meaning that the actual time of the full effect can be reduced down to 100ms. The user can insert any number of points into a single effect and is able to adjust the color and intensity of each point individually. That, alongside with the effect-specific option (e.g. duration, velocity, etc.) and the ability to choose practically any color of the visible spectrum allows the users to create nearly any lighting effect conceivable.

The last main section of the CUE software, the Settings section, holds details about the device and the software settings. From this section, the user can select different layouts, update the firmware of the keyboard, and adjust the on screen display (OSD) options and basic software settings. The user can also set the media keys to work with specific media players, allowing direct control of their interface even in-game. Finally, the Support tab holds basic information about your system, details on how to receive technical support, access to the forum, and where to find the 142-page user manual (I suggest you download that, as you will most likely need it). It is also capable of generating an advanced system report, which we imagine will be rather useful if there is a problem that requires technical support to know specific details about the user's system.

As you can see, the CUE software is highly advanced; in fact, it's probably the most advanced keyboard software in existence at the time of this review. However, not everything about the CUE software is perfect. As the software is still new and rather complex, we found several minor quirks and bugs that will need to be fixed in future versions. For instance, one of the most serious bugs that we have found is that installation of the software will introduce an input lag on some systems. By disabling an option called "CTRL+Break listening", that input lag vanishes. Another such bug is that the actuation of any key at all will cause the brightness level to cycle when the keyboard is in BIOS mode. Corsair has been informed of these bugs and should fix them in future versions of the software, but the software is still a bit of a work in progress right now.