The iPhone 6 comes with Apple’s newly released iOS 8. For a full rundown of everything Apple is bringing to the table with iOS 8 you can read our review of the operating system itself. iOS 8 also includes changes that are specific to the iPhones 6 and 6 Plus. Much like when Apple moved from the 3.5” 3:2 display in previous iPhones to the 4” 16:9 display on the iPhone 5, these changes are to add support for the new display on the iPhone 6. The home screen now displays an additional row of icons, meaning that it fits even more than an iPad. In addition, all of Apple’s default applications have been updated to take advantage of the larger, higher resolution screen. 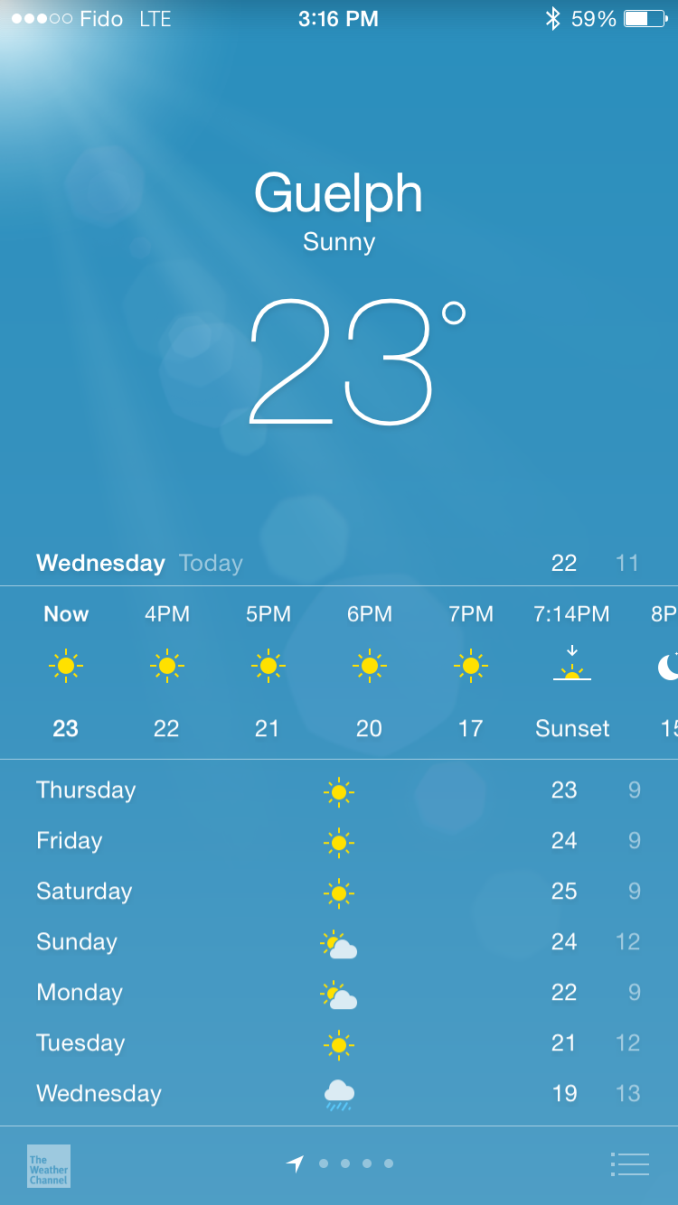 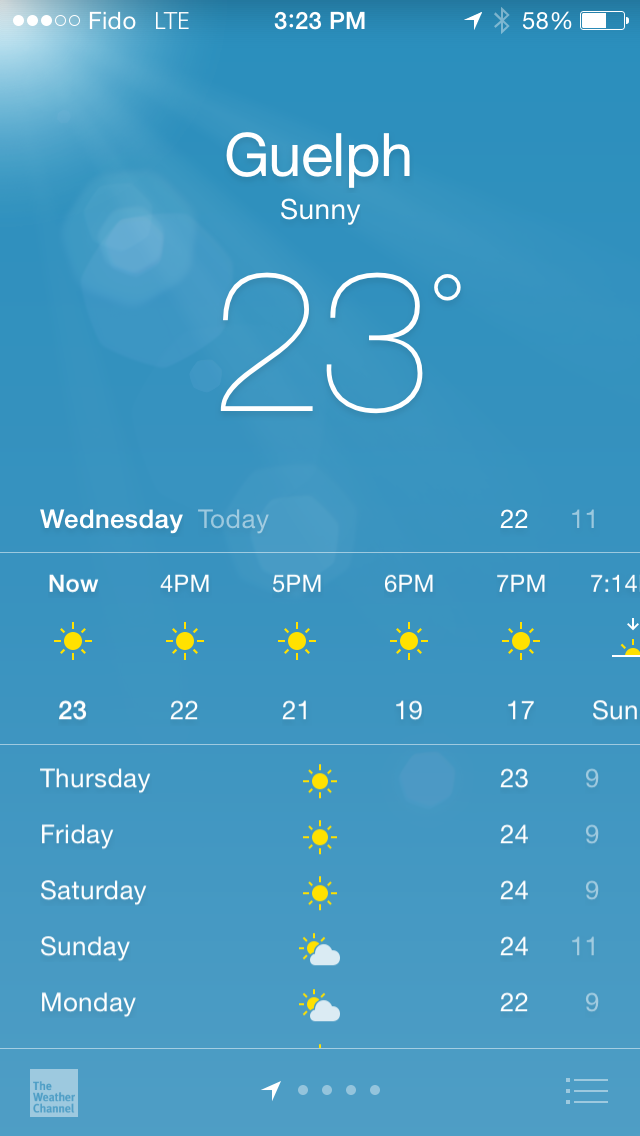 Weather. iPhone 6 on the left, iPhone 5s on the right.

In the case of applications like Calculator, the interface simply has larger assets with the same layout as the 4” iPhones. Other applications like Settings and Notes display the elements of the interface at the same size as previous iPhones which allows more to be fit on the screen. Unlike the iPhone 5 which shared the same width as previous iPhones, the increase in space applies along both display axes on the iPhone 6 Plus. This is well demonstrated by the new Weather application which now fits more of the hourly forecast horizontally and more of the weekly forecast vertically.

The keyboard has also been updated to take advantage of the larger display when in landscape mode. The right side of the keyboard has been given dedicated keys for moving the cursor left and right in a text box, as well as a period button. The left side has an undo key and a comma. When the emoji keyboard is enabled it also receives a dedicated button next to the toggle between letters and numbers/special characters. 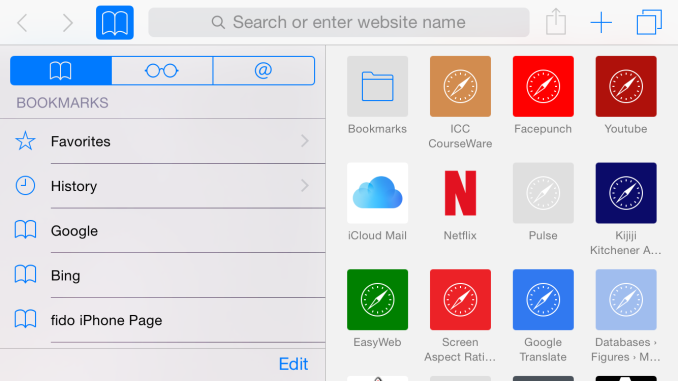 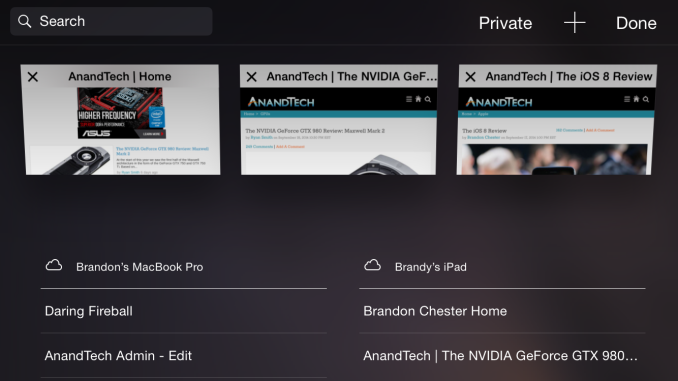 Another application with landscape specific improvements is Safari. While the iPhone 6 does not get the new split landscape views in applications that the 6 Plus has, it does get the horizontal tab view in Safari and the sliding bookmark menu on the new tab page. What's interesting is that this Safari interface is nearly identical to that of the iPad version, which is similar to Safari on OS X Yosemite. The one difference is that tabs in the tab view that are from the same website do not stack on top of each other. Apple really seems to want a unified interface and experience for Safari across all of their platforms, and the general design of the interface has translated well to the various different display sizes on iOS and OS X devices.

The iPhone 6 includes a feature called Reachability for users who find the increased display size difficult to use with one hand. Apple is late to the party with their larger displays, and we’ve seen attempts in the past by other manufacturers to make large devices easier to use. Shrinking the interface and displaying it in a bottom corner was a feature Samsung introduced with the Galaxy Note 3. It wasn’t a very elegant solution, but it worked. Apple’s Reachability feature uses a similar idea but implements it in a more elegant fashion. Double-tapping the capacitive ring around the home button shifts the display downward so the top of applications can be easily pressed. Once an action is performed the interface shifts back into position.

The last new feature specific to the new iPhones is Display Zoom. Display Zoom increases the size of what is displayed so that the interface displays the same amount of information that is shown on the iPhone 5, with an internal rendering resolution of 1136x640. This means that all icons, buttons, etc. are displayed in a much larger size than the default view setting. Because everything is being scaled up to the 1334x750 panel, the interface suffers from the slight blurring that you also see in third party apps that have not been updated to support the new iPhones. This feature is likely aimed at users with aging eyes who would like a bigger display to display bigger controls rather than to display more content, and who aren't concerned about having the sharpest text.

A notable feature that is missing is Apple's new Apple Pay service that works with the NFC hardware in the iPhone 6 and 6 Plus. Although Apple Pay is a feature of the new iPhones and of iOS 8, the service will not be rolling out until October. Other iOS 8 features like SMS Relay and iCloud Photo Library were also absent from the initial iOS 8 release and are scheduled to launch in October. It's likely that the fact that the iOS 8 release date is determined by the yearly release of new iPhones forced some features to be pushed back to a later update.

While the design of iOS 8 itself is generally well-implemented, the user experience ends up a bit more mixed, and the result comes from the confluence of hardware and software. In the case of the iPhone 6, these issues effectively boil down to RAM and odd layouts that come from the upscaling needed for the 1334x750 display. In the case of upscaling artifacts, this is a temporary issue at best but it's glaringly obvious when an application is upscaled in certain cases.

For example, Trillian is an IM application that hasn't been updated in over a year. While it was already lacking in functionality with iOS 7 as it lacked support for the background refresh API, on the iPhone 6 in iOS 8 there are significant issues with consistent spacing and there's also no support for third party keyboards. Once again, it's important to understand that this isn't the result of poor work on Apple's part, but it does show the limits of what can be done with the upscaling system and emphasizes the need for developers to keep their applications updated.

The other issue has the potential to be far more serious. While iOS' software architecture is more RAM efficient due to manual garbage collection and the use of precompiled binaries, it's quite easy for me to push the phone past the breaking point in Safari. For example, six tabs of common websites for mobile devices cannot consistently be held in memory. If I continuously go through all six tabs, at least one will need to reload. In my first attempt at running this test, Safari crashed as I tried to go through all tabs constantly to keep them in memory. I didn't notice this behavior in the new Moto X, which can do the same test without issue. Outside of memory intensive use cases though, the iPhone 6 does respectably and I usually don't notice the lack of RAM. I have to emphasize that this should be a generally unlikely problem, and that the same behavior can be replicated on the iPhone 5s given the same workload. If you did not have issues with out of memory crashes before, there won't be any issues now. 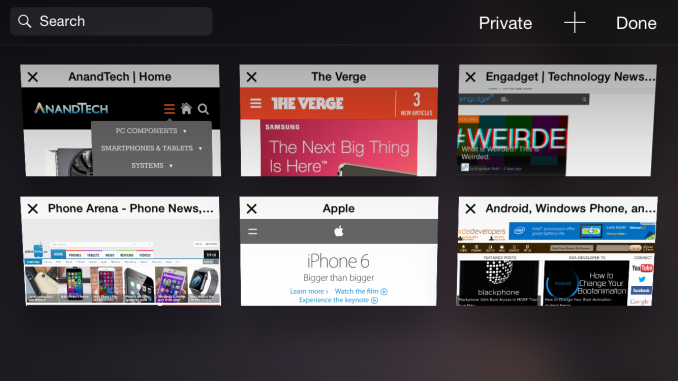 Outside of these two flaws, there's really a lot to like. iOS continues to deliver a relatively well-polished experience that few seem to be able to match. Most of my issues from the iPhone 5s experience have been resolved. For example, it's now possible for me to upload photos to Dropbox selectively instead of turning camera upload on and deleting photos that I don't want to upload. The odd segregation of current notifications and missed notifications has been removed. Swiftkey has been added, although it's not quite the same as the Android version due to the different prediction insertion behavior and keyboard layout.

In addition, although it isn't necessarily the result of software, the larger display really helps with improving touch accuracy when compared to the iPhone 5s. While I haven't been able to try out Apple Pay since it will be launching in October, it also seems to be quite intriguing as the NFC solution is quite novel, though I'd like to see further use of NFC outside of payment and similar applications. TouchID continues to be a key differentiator, and the use of TouchID for Apple Pay authentication would definitely show the strength of Apple's hardware and software integration.