For the battery life tests, we have a standard workload that the phone performs while connected over Wi-Fi, or Cellular data. The display is calibrated at 200 nits for consistent comparison data for the charts. The device is run under this standard load until it shuts down.

Windows Phone has a battery saver mode, so these tests were done twice. Once with battery saver disabled, and another with it enabled which stops all background events from being run. 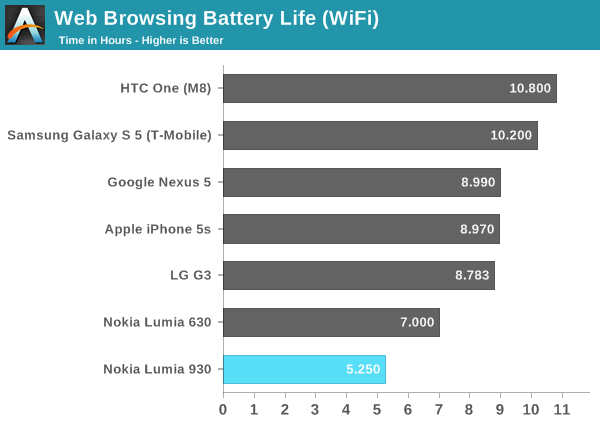 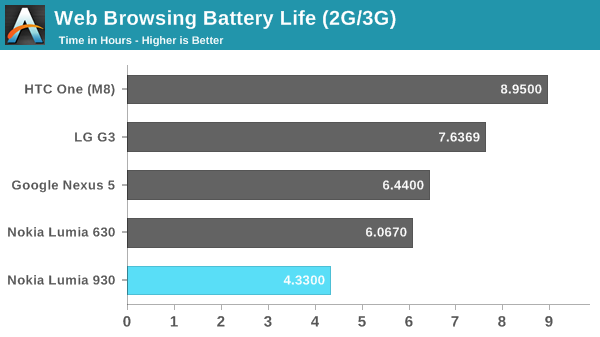 The Lumia 930 has an integrated 2420 mAh 3.8 V battery, for a total of 9.2 Wh. This is quite a bit smaller than the battery in the Galaxy S5, which has the same screen size and also has a removable battery. Unfortunately the Lumia 930 is one of the worst performers in battery life in a long time, with just over five hours of Wi-Fi battery life. The phone gets very warm during these tests. The AMOLED display in this phone seems to draw an exorbitant amount of power when displaying the mostly white content of our web browsing tests. I was unable to test over LTE due to the model of 930 that was shipped to me for review not supporting any of the LTE bands in my area, but over HSPA the result is unsurprisingly even worse than Wi-Fi, with only 4:20 of runtime.

Windows Phone also includes a Battery Saver feature, which disables most background tasks from being able to function unless you have specifically allowed them. Email, as an example, must be manually synchronized rather than having push support. With the Lumia 630 this dramatically increased the runtime of the phone. 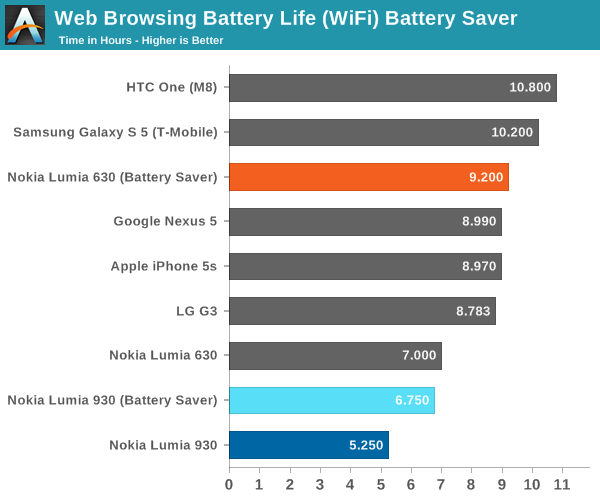 As we saw with the Lumia 630, Battery Saver has a significant impact on battery life. However, we simply go from terrible to bad. The Lumia 630, with a smaller battery, does significantly better with its low resolution LCD display in this test.

Another battery test we can perform is by using BaseMark OS II, which contains a battery life test. This eliminates us depending on the javascript engine as part of our test. 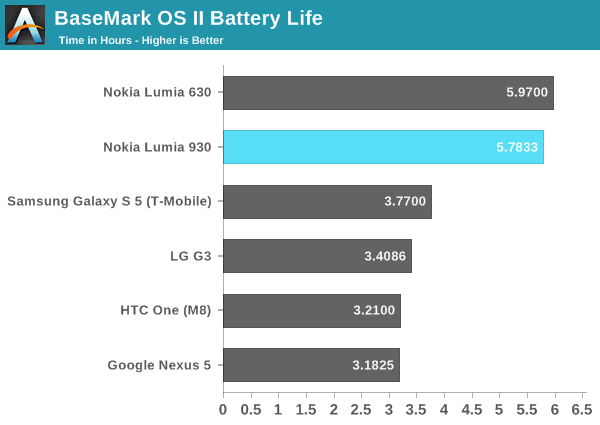 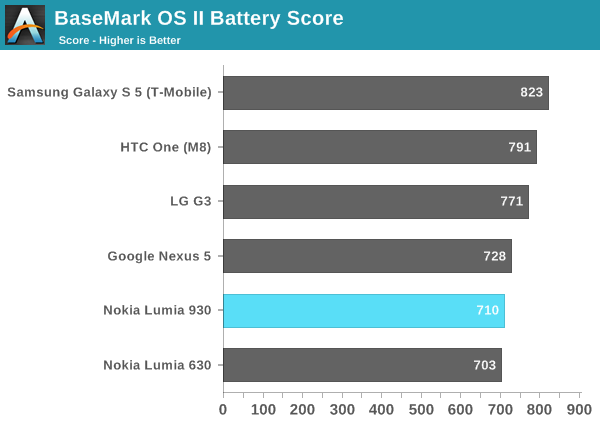 On the battery score for the Basemark test, the Lumia 930 does not do as well as the high runtime would suggest, falling behind other devices once again, but in this test, it is much closer than the web browsing test.

The Lumia 930, with the latest version of Windows Phone, supports Qualcomm’s Quick Charge 2.0 specification which allows a higher voltage charger to be used for much faster charging. The 930 also supports built in Qi wireless charging.

The 930 which was sent for this review came with an EU wall plug, which is obviously incompatible with North American electrical outlets. The charger shipped with the unit supports up to 1.5 A at 5 V, but the highest amperage charger available to me was a 1 A version which I used for these tests. Expect better results if using the 1.5 A version, or especially if you have a Quick Charge 2.0 capable charger. 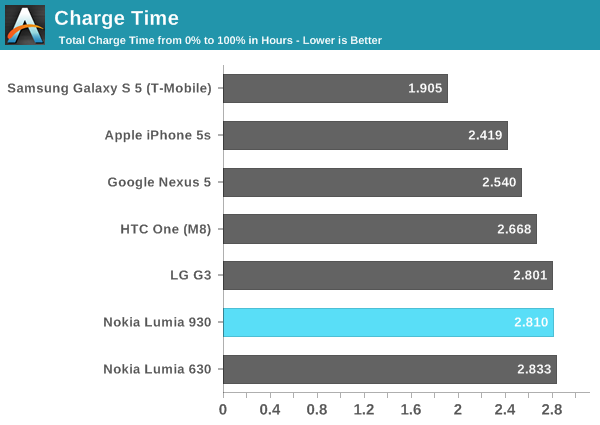 At almost three hours, this is a bit high, but with the correct charger this should be closer to the 2.5 hour mark, if not under.

As Anand found during his review of the Samsung Galaxy Tab S, AMOLED devices can suffer in the web browsing tests due to the mostly white backgrounds, but they can excel at video, and the Lumia 930 follows in the same direction, but white backgrounds put a major strain on the battery of this device. Still, the newer generation AMOLED in the Galaxy S5 could last 10 hours with its 10.78 Wh battery.

The Lumia 930 is not a small phone. In fact, with the straight sides, the Lumia 930 has quite a bit of volume to it. One of the tradeoffs of sealed battery phones like the Lumia 930 is that you should be able to fit more battery into the device because you don't have to worry about the shape of the battery, or have a plastic case around the battery for an end user to handle. The Lumia 930 does not follow with this logic. It is difficult to comprehend how a phone this size can not have a larger battery in it.

That being said, real world battery life was never a big issue for me during my time with the phone. The battery saver app will give you an estimate as to how much time is remaining before the device needs to be charged, and it always showed well over a day. Many of the Windows Phone hubs and apps have black backgrounds, which can dramatically increase the battery life of AMOLED devices which also contributes. Still, with the progress on battery life in the last several generations of phones, one would expect more.