The Lumia 930 is the second device from Nokia to utilize the Snapdragon 800 platform, with the Lumia 1520 6” Phablet also sporting the same SoC. In this particular case, it is the MSM8974VV variant which contains four Krait 400 cores at up to 2.2 GHz, along with as Adreno 330 GPU. The 930 also has 2 GB of LPDDR3 memory. This combination really kick-starts Windows Phone, which prior to the 1520 had been utilizing dual-core Krait 200 on the upper end models. The implications are dramatic, with the Lumia 930 providing a huge real-world increase in speed. Anyone who believes Windows Phone somehow does not need a faster SoC is kidding themselves, as this device has proven to me. App loading times are much quicker, and app rehydration, which is a huge issue on older devices, is so much quicker that it is almost instant. Skype is well known to all Windows Phone users for having sometimes ridiculous rehydration times, but the Snapdragon 800 almost completely overcomes this handicap. 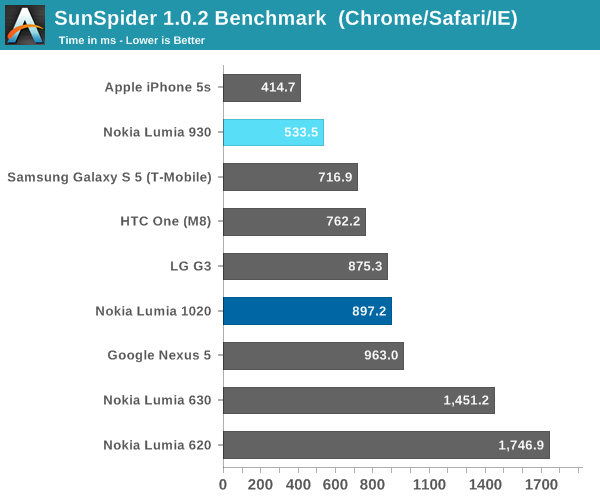 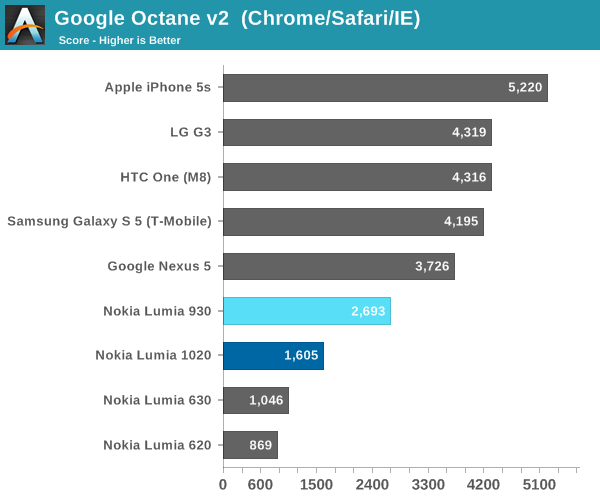 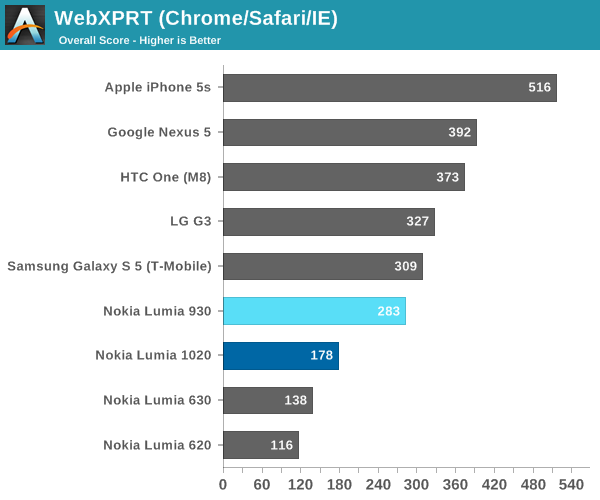 Sunspider has the Lumia 930 besting all but the iPhone 5s. Historically Internet Explorer has always done well at Sunspider though, and version 11 continues that trend. Unfortunately this benchmark has been optimized for by all companies. Moving up to more complex Javascript, we can see the difference with IE 11 compared to other browsers. The 930 falls behind the Google Nexus 5 which shares the same SoC, and it is well behind the Snapdragon 801 equipped phones. However the 930 scores almost half of the 1020 which is a great generational leap. A similar situation occurs on Google Octane, with the 930 behind the Nexus 5, but well ahead of last year’s Lumia devices. WebXPRT scores show the same trend. The Snapdragon 800 transforms Windows Phone into a contender. Javascript performance of IE 11 still is not as good as Chrome or Safari, but it is at least getting close with the latest version of the browser. 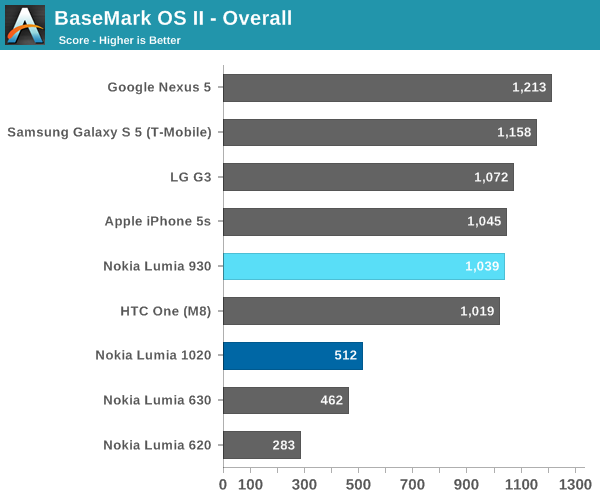 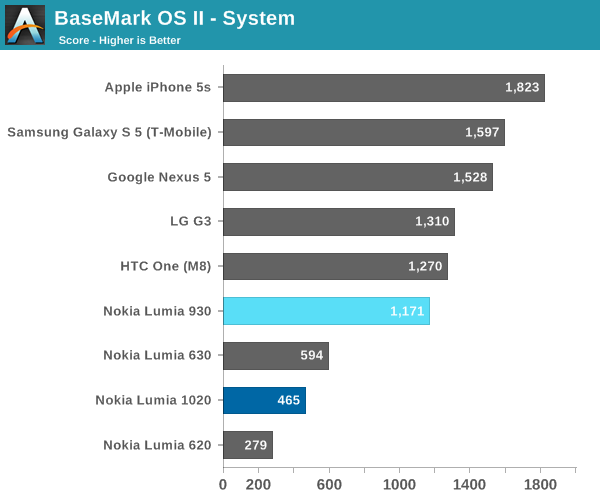 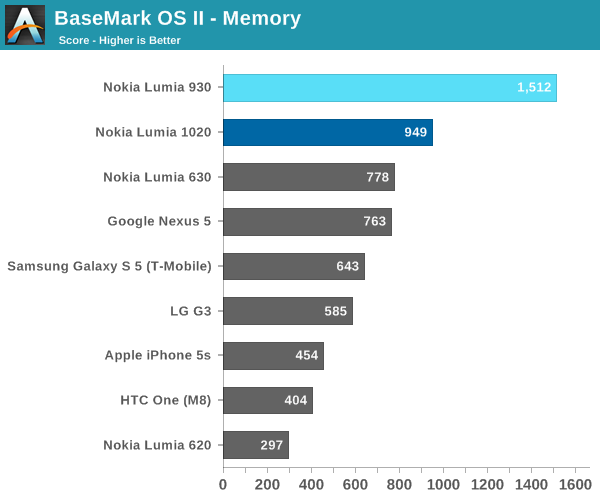 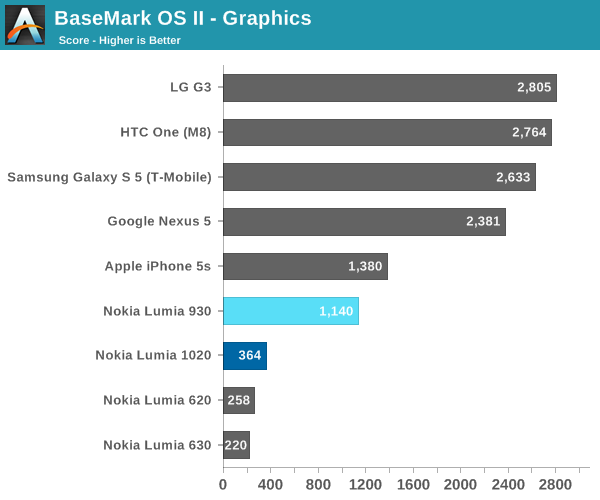 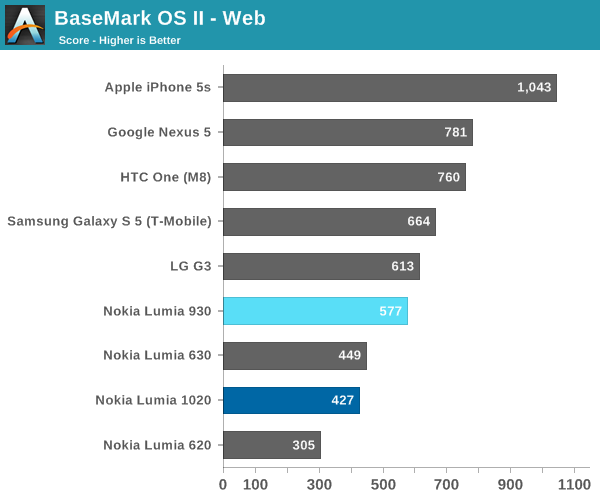 BaseMark runs as a native application, and therefore is not handicapped by the Javascript engine of the browser. Here the 930 performs well, with a score right around the same score as the iPhone 5s. Performance compared to the dual-core Krait 200 of the Lumia 1020 is once again pretty much doubled. Looking at the rest of the BaseMark scores, it becomes very clear how much of an improvement the 930 is over previous Windows Phones with MSM8960.

For GPU comparisons, we would normally turn to RightWare’s Basemark X 1.1, however a bug in the current version prevents it from running on the Lumia 1520 and Lumia 930. I have contacted them, and they have promised to look into it. If a patch is released, I will re-run the tests and update Bench. We do have access to GFXBench though, so let us see how the 930 performs. 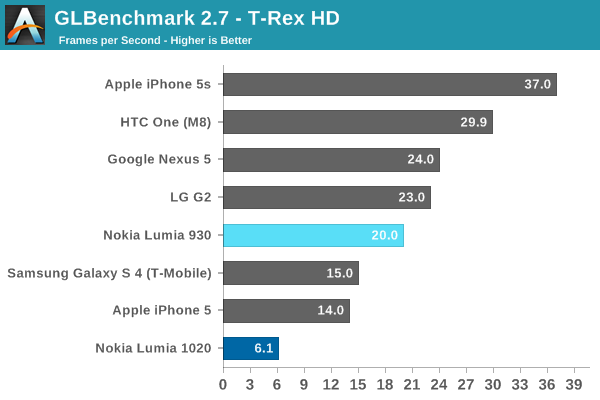 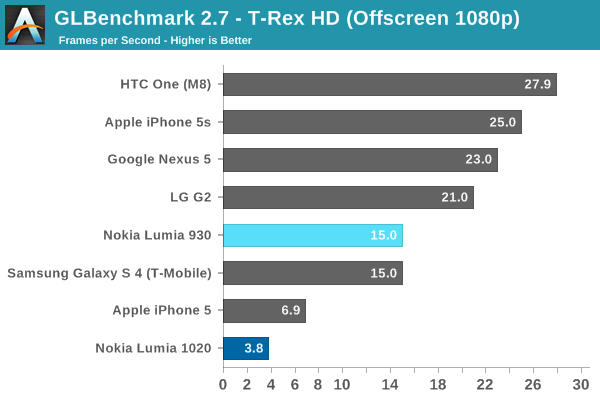 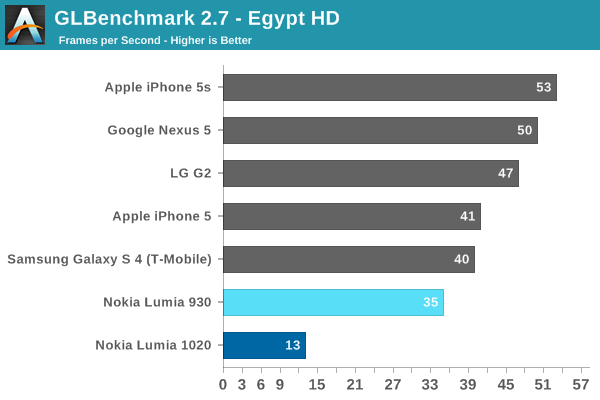 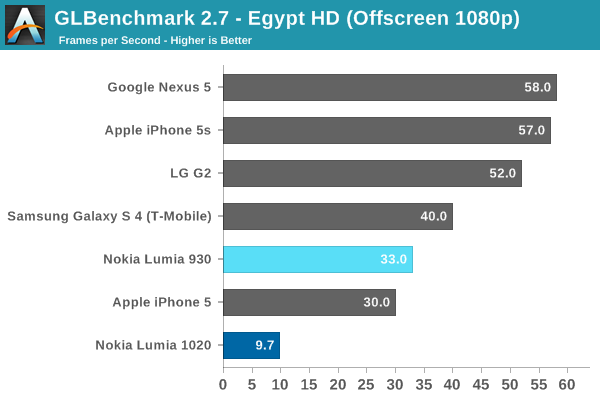 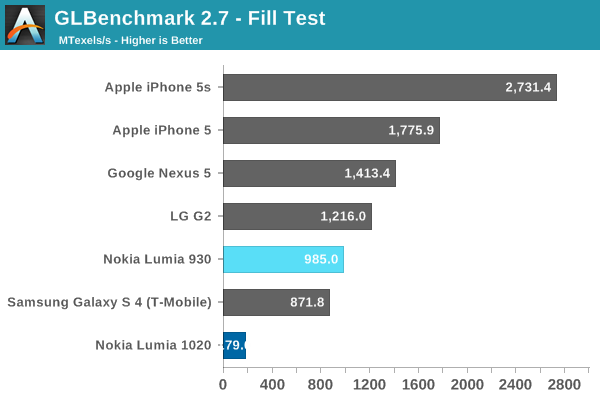 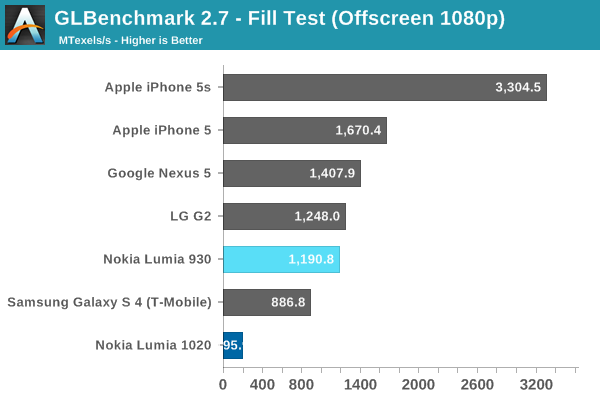 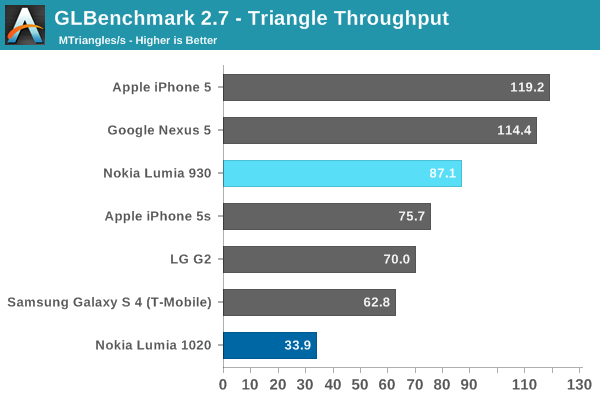 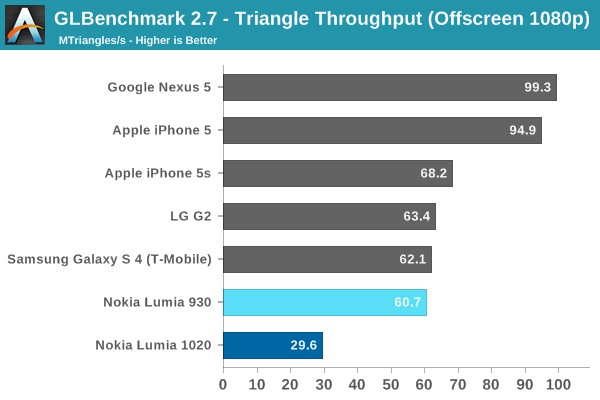 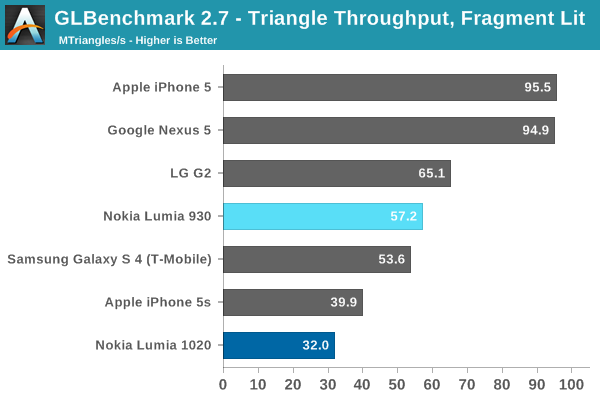 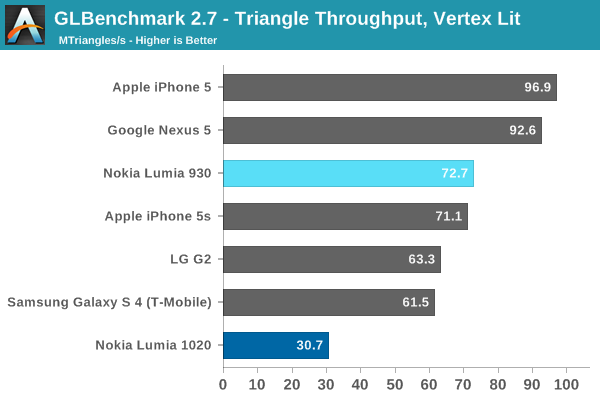 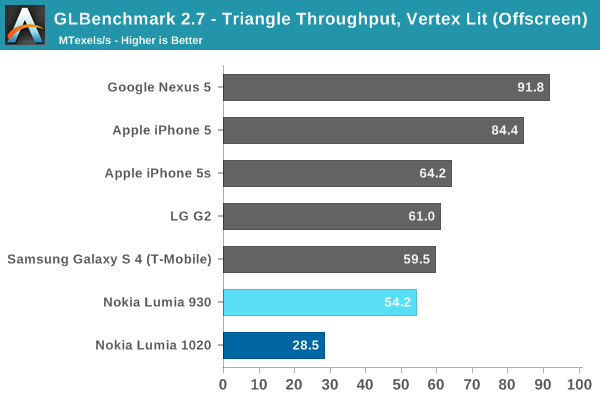 Version 2.7 of the benchmark is the current one for Windows Phone, with 3.0 listed as coming soon, however we can still get a glimpse at the huge performance leap from the last generation. While still not as quick through the benchmarks as Android and iOS, it is at least in the same room as them now.

Windows Phone does not support our storage benchmarking apps, and current ones in the store are either wildly inaccurate, or just provide abstract results. For this reason, we are going to create our own, but it is not ready yet. NAND performance was not tested on this device.

One thing that Anand has harped on with regards to Windows Phone is that it is often on a much older SoC than competitive Android phones. This delta in performance is difficult to turn a blind eye to, even for supporters of the platform. With the 930 and Icon counterpart, Nokia has launched a phone which was on the most current SoC at the time of launch in February, which is a big step forward for Windows Phone performance. With the recent release of the HTC One (M8) for Windows, the platform now has the same SoC as most other flagship Android devices. That is a much bigger deal than many realize. The performance of Windows Phone has always been good on low end hardware, at least as far as the actual OS and animations, but in-app performance could suffer. The Lumia 930 is a breath of fresh air to Windows Phone and this one change alone is quite startling when compared to older devices.