Efficiency is very important in many scenarios, so let's start by checking out idle power consumption. We quickly realized that many servers would use simpler boards with much fewer chips than our ASUS P9D-MH, especially in micro servers. It is also clear that it is very hard to make a decent apples-to-apples comparison as the boards are very different. The Xeon 1200 V3 board (ASUS) is very feature rich, the Intel board of our Xeon E3 is simpler, and the board inside the HP m300 is bare bone.

But with some smart measurements and some deduction we can get there. By disabling SAS controllers and other features, we can determine how much a simpler board would consume, e.g. a Xeon E3 board similar to the one in the m300. To estimate the range and impact of the motherboard and other components, we also test the Xeon E3-1230L v3 in two other situations: running on the Supermicro board with cooling not included and on the feature rich ASUS P9D (a small fan is included here). You can find the results below. 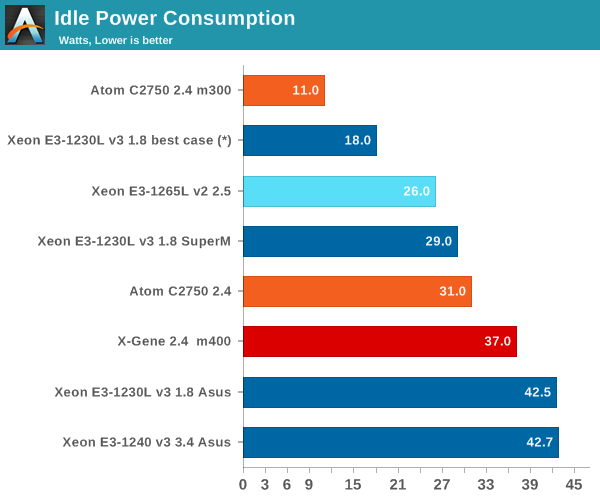 The Supermicro nodes are quite efficient, with less than 29W per node. We measured this by dividing the measurement of four nodes by four. However, out of the box the fans have a tendency to run at high RPM, resulting in a power consumption of 7W per node in idle and up to 10W per node under load.

The m400 cartridge has eight DIMMs (instead of four) and a 10 Gbit controller (Mellanox Connect-X3 Pro Dual 10 Gbe NIC, disabled). Those features will probably consume a few watts. But this is where reality and marketing collide. If you just read newsbits about the ARM ecosystem, it is all robust and mature: after all, ARM's 64-bit efforts started back in 2012. The reality is that building such an ecosystem takes a lot of time and effort. The ARM server software ecosystem is – understandably – nowhere near the maturity of x86. One peak at the ARM 64-bit kernel discussion and you'll see that there is a lot of work to be done: ACPI and PCIe support for example are still works in progress.

The X-Gene in the HP m400 cartridge runs on a patched kernel that is robust and stable. But even if we substract about 5W for the extra DIMMs and disabled 10GbE NIC, 32W is a lot more than what the Atom C2750 requires. When running idle, the Atom C2750, the four low voltage 8GB DDR3 DIMMs, the 120GB SSD, and the dual 1GbE controller need no more than 11W. Even if we take into account that the power consumption of fans is not included, it shows how well HP engineered these cartridges and how sophisticated the Intel power management is.

For your information, the m350 cartridge goes even lower: 21W for four nodes. Of course, these amazing power figures come with some hardware limitations (two DIMMs per node, only small M.2 flash storage available).