You are blessed to be building an Athlon XP system today simply because of the plethora of platform options you have at your fingertips. Motherboards are cheaper than ever, and the performance of the Athlon line has increased over 10% just because of advancements in chipsets. At the forefront of the Socket-A chipset market we have VIA whose KT266A is finally starting to appear on motherboards in the channel. For this review we tested with the first final KT266A motherboard we have been able to get our hands on: the EPoX EP-8KHA+.

In spite of AMD's requests, EPoX's 8KHA+ appropriately reports the "real clock" of the CPU at POST

The board performed just fine and was actually on par with the KT266A reference board we previewed not too long ago. We ran into a few problems with the board not POSTing after changing CPUs without resetting the BIOS but luckily no major issues that couldn't be fixed with a BIOS update. 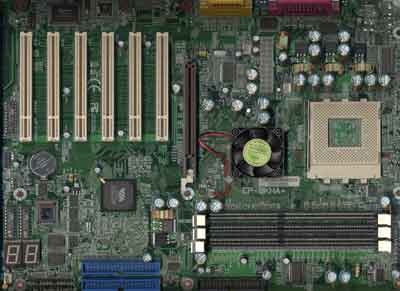 The 8KHA+ features an external temperature sensor located in the center of the CPU socket meaning that it probably does not take advantage of the Athlon XP's integrated thermal diode. This was to be expected though since it took motherboard manufacturers an incredibly long time to take advantage of Intel's integrated thermal diodes; it really wasn't until the Pentium 4 that it became standard to see motherboards measure the temperature of Intel CPUs according to the thermal diode of the processor.

While the current batch of Socket-A motherboards are not nearly as flawless (in regards to overall stability/quality) as the i845 boards we rounded up not too long ago, they are approaching maturity as time goes on. Especially with the incredible effort NVIDIA is putting into drivers for their nForce platform, we may see things improve dramatically for the platform in the next few months.