Getting past the marketing strategy of the Athlon XP, what we have is a higher clocked version of the Palomino based Athlon that was introduced in June.

This core remains unchanged from the core that is in the Mobile Athlon 4 and Athlon MP processors, meaning it features the same enhancements over the previous Thunderbird core:

We have already covered all three of those improvements in great depth so rather than regurgitating them here we'll ask that you read our original overview of the improvements.

In spite of the fact that the core is the same Palomino core we saw earlier this year, just by looking at the chip you can tell that there are some other differences between the Athlon XP and the Athlon 4/MP. 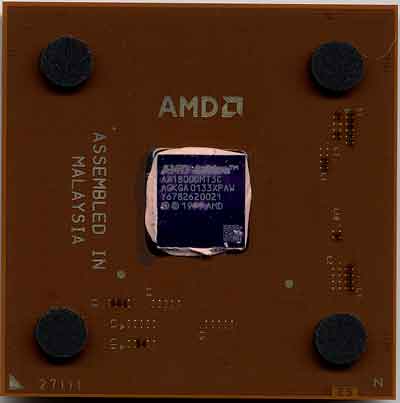 As you can tell from the above picture of the Athlon XP 1.53GHz (1800+) the processor features a new packaging type. More specifically, the Athlon XP showcases AMD's first organic based packaging. Prior to the Athlon XP all AMD CPUs had used a very dated ceramic based packaging technology. The move to this organic package will allow AMD to scale the clock speed of the Athlon XP as well as its FSB if need be. It also allows AMD to mount capacitors closer to the core of the CPU on the underside of the package; this aids in improving power delivery to the core and filtering out noise. With AMD scheduled to shrink the Athlon XP down to a 0.13-micron circuit size next year, these capacitors will be even more useful as the core voltage of the processor is dropped yet again. For more information on the importance of packaging technology and its future, take a look at our latest article on it.

The next thing you'll notice is that all of the Athlon XP CPUs run off of a 133MHz FSB (albeit double data rate effectively offering the bandwidth of a 266MHz FSB). You will not see any Athlon XP processors with a 100MHz FSB since there's no real reason to use the lower frequency FSB anymore; the Athlon XP, especially at the higher clock speeds, will definitely make use of the 133MHz FSB.

For you overclockers out there, the process has not changed on the Athlon XP. We had no problem connecting the L1 bridges of our processors and adjusting the multiplier from within the BIOS of our EPoX 8KHA+ test platform.