For those that have followed our Z87 and Z97 BIOS coverage, the ASRock BIOS for the 990FX Extreme9 falls very much on the side of Z87, which makes sense as the platform will probably not be seeing many updates, if any, for the foreseeable future. The main screen uses white text on a starry background, with the selected option very clearly defined. 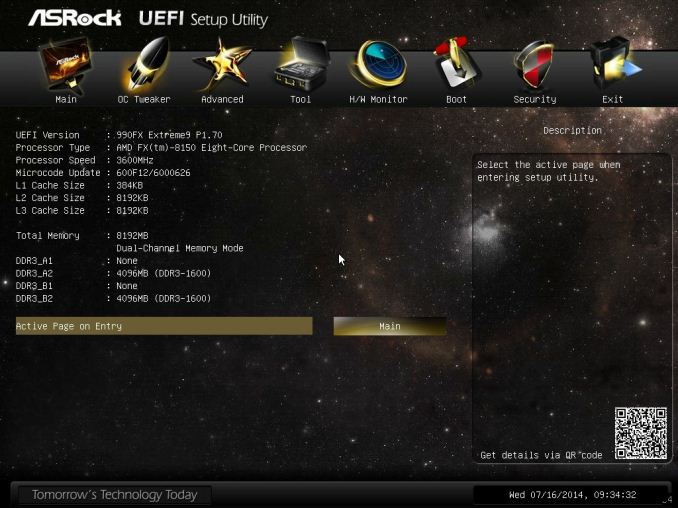 In this main screen we have details of the motherboard name, the BIOS version, the CPU installed, the CPU Speed, the DRAM installed, the per-module density and the current speed of each module. Other information that would be good to have includes the main system voltages, temperatures and fan speeds. Note that ASRock has not yet implemented a system that contains this information across every BIOS screen, unlike some of their competition. On this screen is also an ‘Active Page on Entry’, useful for overclockers that want the BIOS to skip straight into the OC Tweaker menu. 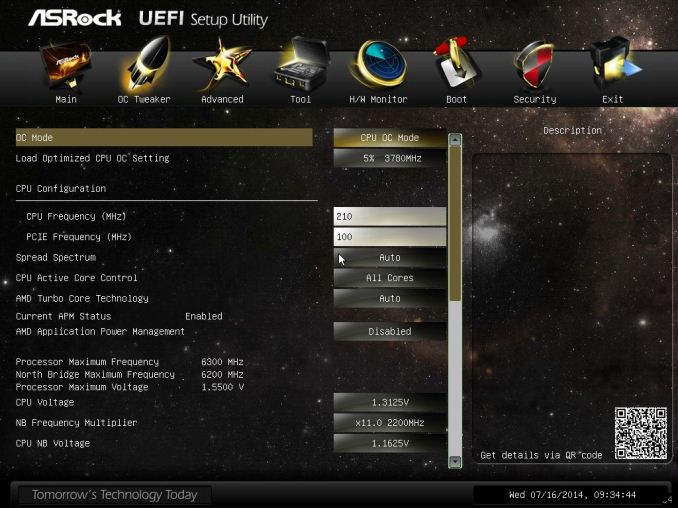 The OC Tweaker menu, as the name suggests, has the overclocking options. ASRock like to add in some automatic overclock options, and here we get the choice from a 5% to a 50% overclock: 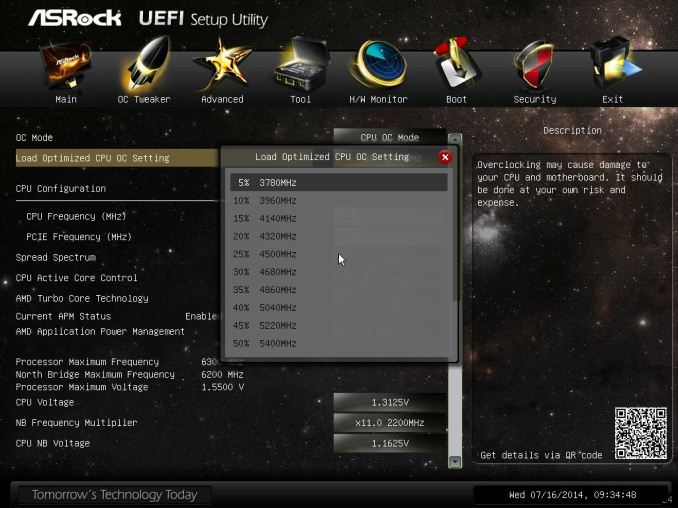 Typically the higher overclocks would be outlined in red to indicate an extreme overclock, but ASRock does not do that here. The rest of the OC Tweaker menu has the CPU configuration settings, DRAM Timing options and Voltage configuration. Load Line Calibration is a single option in the voltage section, and the DRAM Timing Control is a separate menu item for memory sub-timings: 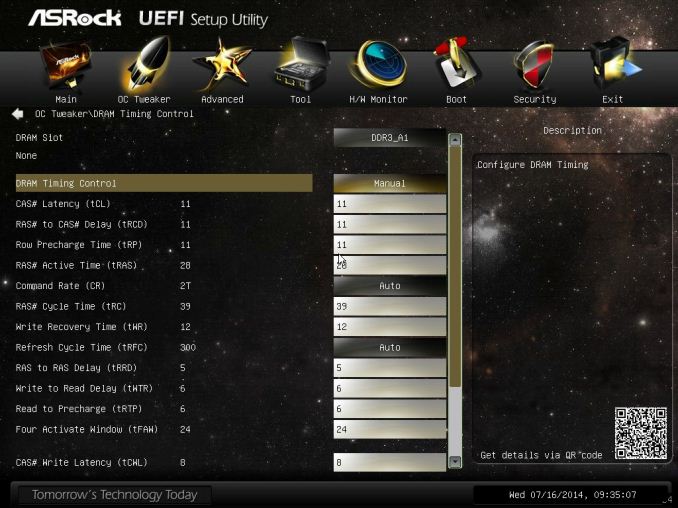 The Advanced tab contains options for enabling/disabling controllers, adjusting SATA modes and implementing some power saving features. The Tool menu next is where ASRock has their more interesting features, such as System Browser that gives an overview of the motherboard and tells the user what is installed: 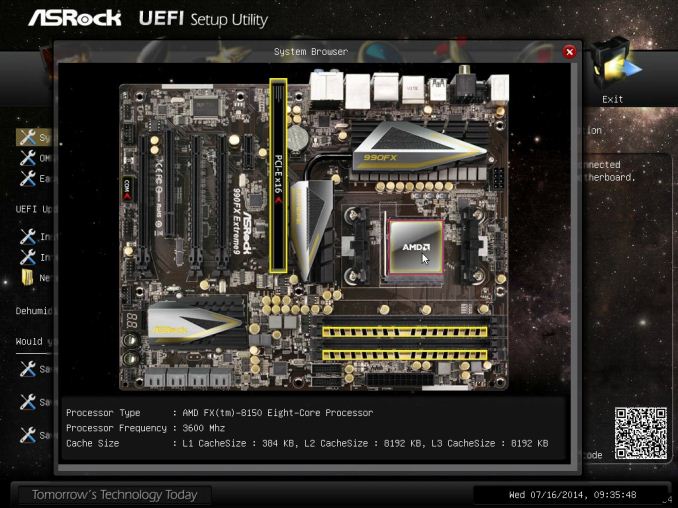 The Online Management Guard feature displays a timetable for the week and allows the user to disable the network features. One of the major purposes of this feature is for adults to restrict their children’s use of the internet at odd hours of the day. 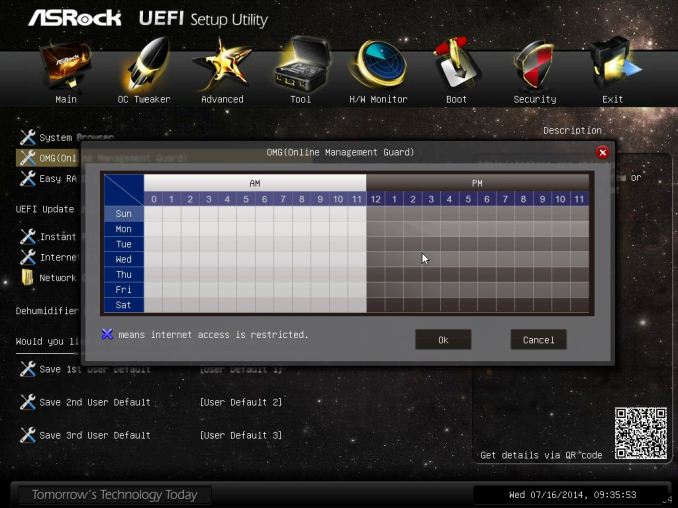 The Dehumidifier function keeps fans enabled after the system has switched off in order to equilibrate the temperature inside the case with the temperature outside the case. In the event of warm, moist air in the case that cools in the evening, in humid climates this may cause condensation, hence this feature. There are also menu options to save user profiles within the BIOS underneath this setting. 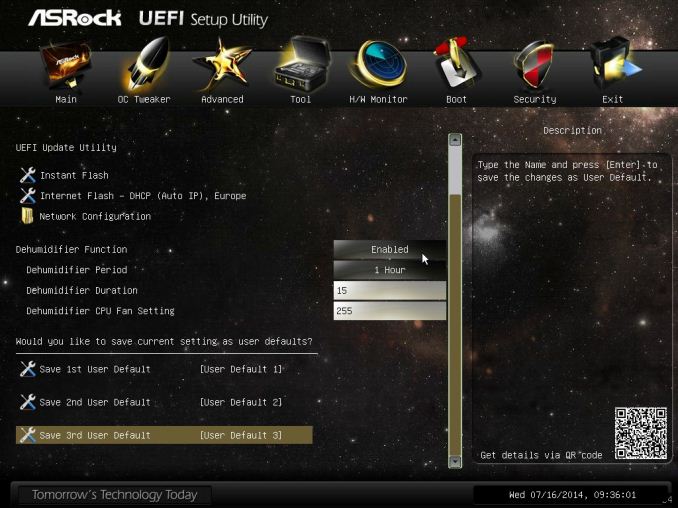 The Fan Controls are how ASRock used to do them, in terms of ‘levels’, with the higher the level indicating how quickly the CPU fan power would ramp up. Some of the headers have the option of tying the fan power to the CPU temperature, meaning that if the CPU temperature rises above a value, the fan is placed on full speed until the target temperature is reached. 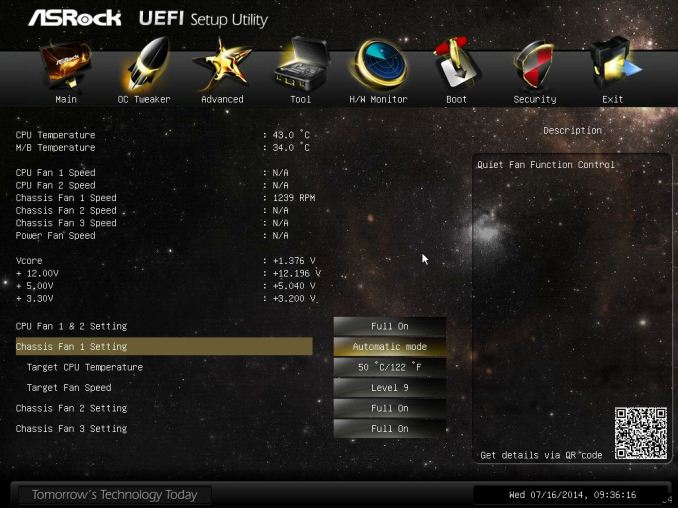 The BIOS finishes up with boot options and security. One missing feature from ASRock BIOSes is a boot override feature, allowing for a one-time boot from within the BIOS.

The software for the Extreme9 is centered around the ASRock Extreme Tuning Utility, or AXTU for short. AXTU used to be the main interface, until A-Tuning came about for Intel’s 8-series motherboards, but due to the age of the motherboard (or perhaps incompatibilities) this software has not been upgraded. 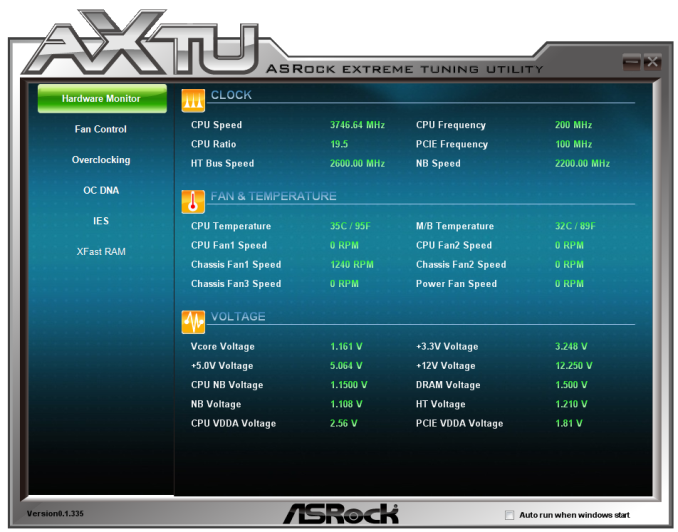 The screen that pops up first with AXTU is the Hardware Monitor interface. This shows the CPU speeds, base frequencies and multipliers, as well as the fan speeds, temperatures and voltages. Two key bits of information missing are the CPU installed and the motherboard which is being used.

AXTU also is part of the fan control: 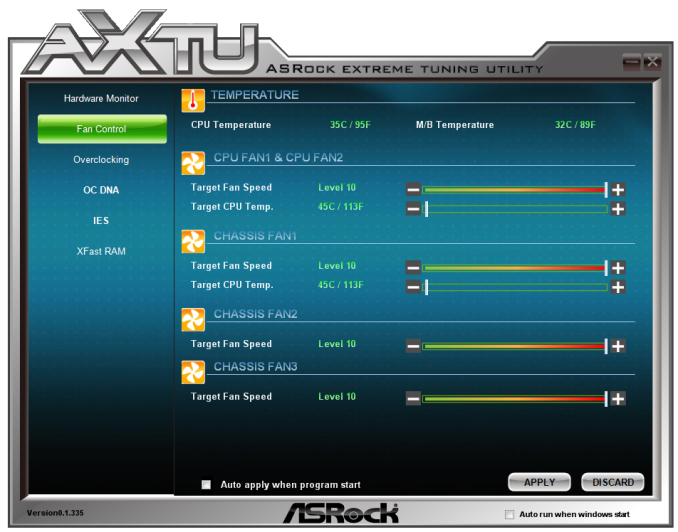 The fan controls here are similar to that in the BIOS, relying in the ‘level’ system to determine the gradient at which the fan speed is ramped up. Users can select a target temperature which will put the fan at full speed when the CPU is above the target. 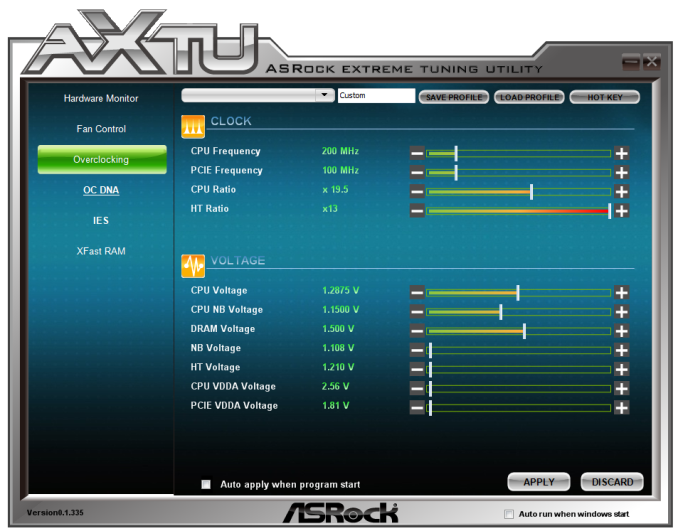 The overclocking interface offers several simple options, although no automatic overclocking setups. Here we can adjust the base frequencies, the multipliers and the voltages, although nothing along the lines of load-line calibration. 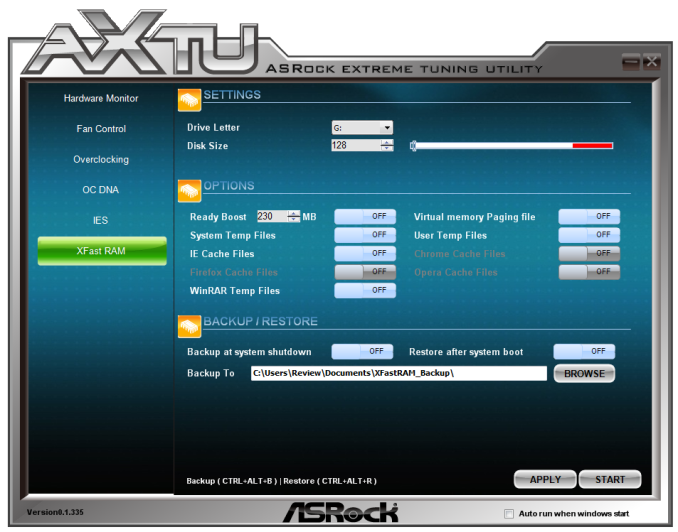 AXTU also provides an interface to save the BIOS and some power saving features, but also XFast RAM. This feature allows the user to partition off some of the memory into a RAMDisk, and AXTU will also manage some caching options in order to speed up some of the operating system functions. 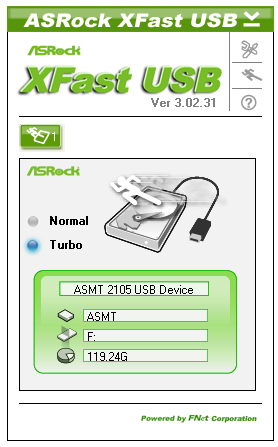 While ASRock has dropped XFast USB with the latest Intel 9-series motherboards, the software is here on the Extreme9 and implements newer USB protocols to increase peak transfer speeds at the expense of latency. In our copy tests, the XFast feature does provide a tangible benefit, although the feature is limited to one USB device at a time. 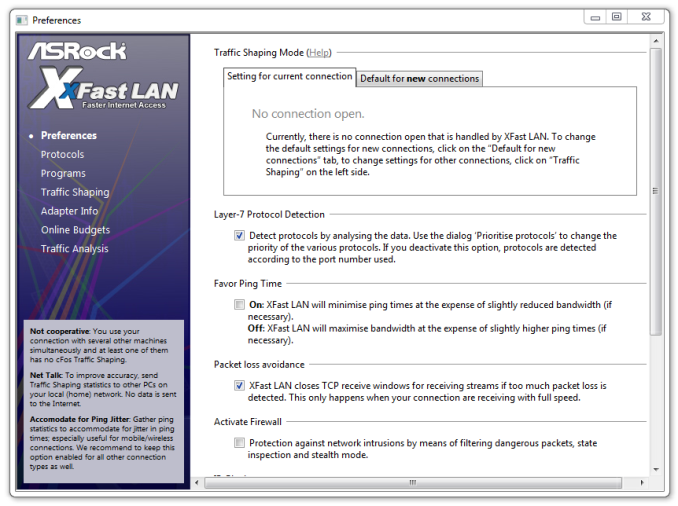 XFast LAN is a licensed and skinned version of cFos, which allows for software manipulation of network priority.