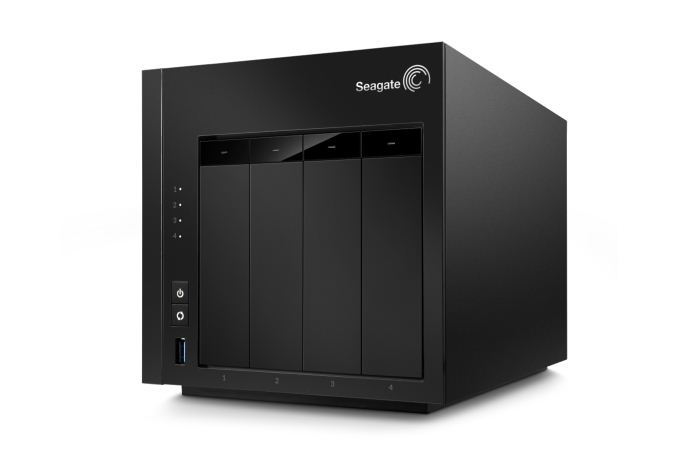 Seagate recently rebooted their NAS offerings, completely revamping their 2013 Business Storage lineup and dropping the old software platform altogether. In its place, they adopted the Debian-based NAS OS, development of which was started by LaCie prior to their acquisition by Seagate. In their 2014 lineup, Seagate has two classes of products, the NAS and the NAS Pro. While the former is suitable for workgroups of 1 to 25 clients, the Pro version pushes that up to 50.

Home consumers and power users form a a rapidly growing market, signified by the wealth of features that Synology and QNAP are bringing to the table in their firmware / product line to target it. Knowing fully well that it takes time to tune the firmware to reach that market, Seagate has wisely decided to concentrate on the SOHO / SMB segment, which is also experiencing similar growth levels. In that segment, purchase decision-makers tend to prefer a single point of contact for the system as a whole, and this works to Seagate's advantage as a hard disk supplier.

The NAS lineup is based on the Marvell ARMADA 370, while the NAS Pro is based on the Intel Rangeley platform. The unit we are looking at today is the NAS 4-Bay. Low cost and power efficiency are some of the positives for ARM-based solutions. With drive capacities on the increase, we have seen users move to 4-bay NAS units in order to take advantage of RAID-10 (despite the loss of effective storage space). This helps to avoid (to a certain extent) risk-prone rebuilds associated with RAID-5 arrays. We have already evaluated multiple ARM-based 4-bay solutions before. So, it will be quite interesting to see how the Seagate NAS 4-bay performs against those.

The STCU100 NAS 4-bay's Marvell ARMADA 370 is no stranger to our labs. We have already seen it in action in the Western Digital My Cloud EX2, albeit in a 2-bay unit. The ARMADA 370 has a single ARMv7 core running at 1.2 GHz, and its appeal is further strengthened by an optimal mix of high-speed I/Os hanging off the SoC. The other specifications of the NAS 4-bay are provided in the table below.

The NAS 4-bay runs Linux (kernel version 3.10.37). Other aspects of the platform can be gleaned by accessing the unit over SSH. 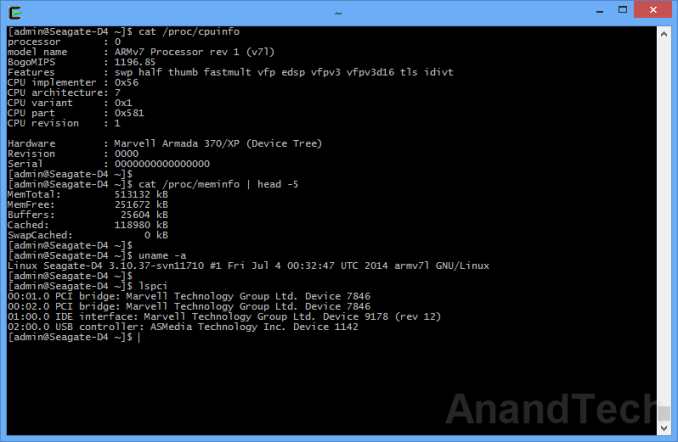 The Seagate NAS 4-bay can take up to four drives. Users can opt for either JBOD, RAID 0, RAID 1, RAID 5, RAID 6 or RAID 10 configurations. We benchmarked the unit in RAID 5 with four Western Digital WD4000FYYZ RE drives as the test disks. Our testbed configuration is outlined below.