The Millenium Glaciator is another all-copper heatsink, with the fan embedded into the cooler. The lower part is cut out of a copper block, the upper part (surrounding the fan) is soldered onto it. 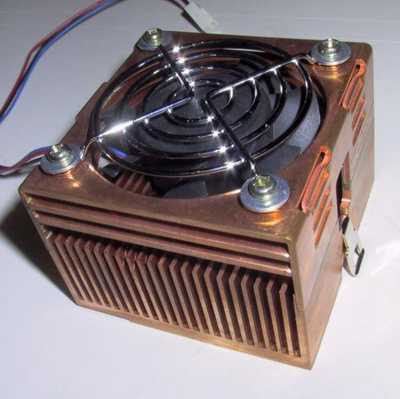 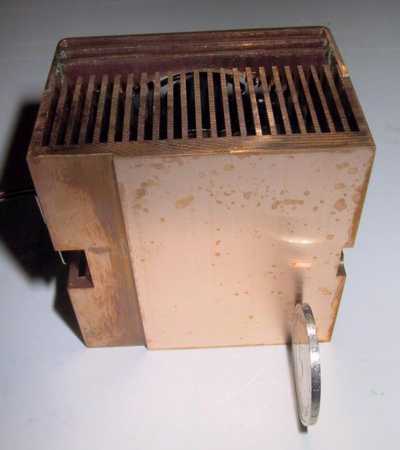 You might wonder: Where do these little spots on the lower side come from? Well, the Glaciator ships with a protective foil on its lower side, which also prevents corrosion. The spots are there where little air bubbles in the foil allowed the copper to oxidize. The oxidation layer is so thin, though, that it does not negatively effect thermal transfer.

The Glaciator is excessively heavy - it weights 710 grams, which make it the heaviest heatsink in this roundup. Nevertheless, it comes with a clip that uses only two of the six mounting cleats on the socket - so there is a high risk of breaking off the heatsink when moving around the PC. And you can imagine what kind of damage a 710g copper block will cause inside your PC case once it's broken off during transport. The manufacturer is aware of this problem, and therefore recommends to uninstall the heatsink before moving the PC. Definately not practical. Fortunately the clip at least allows easy installation and deinstallation. Millenium includes genuine ArcticSilver II thermal compound with the Glaciator.

The Glaciator is less noisy than the coolers equiped with 7000rpm Delta fan - nevertheless, it outperformed most of these (except for the Thermalright SK6 and the Jag Cooler JSC-212). We think that it was a wise choice of Millenium Thermal to sacrifice a little cooling performance in order to achieve a slightly more bearable noise level. The Glaciator still isn't a "quiet" heatsink, but its performance/noise ratio is good. Only the Alpha PAL8045 with Orix fan provided similar performance at an even lower noise level but the Alpha does not fit motherboards for Intel CPUs, and ist more expensive. The Glaciator costs  only $34 (including Arctic Silver II - keep this in mind when comparing prices), and also fits most motherboards for Intel CPUs. So, if you can live with the limitation of not being able to move your PC around without first uninstalling the heatsink, then the Glaciator is a good choice. We'd be more enthusiastic about it if Millenium used a better clip which takes advantage of all six pegs on the CPU socket.