It seems that when designing the PAL8045, Alpha's engineers looked at the design of the older model PAL6035, and said to themselves: "We can't make it better, but we can make it bigger". Just like its little brother, the PAL8045 features an anodized, cold-forged heatsink with hexagonal fins, and a copper base plate. The heatsink, as the name suggests, is 80x80x45mm big, and is equiped with an 80mm fan. 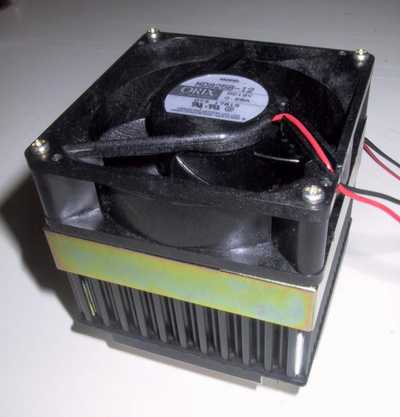 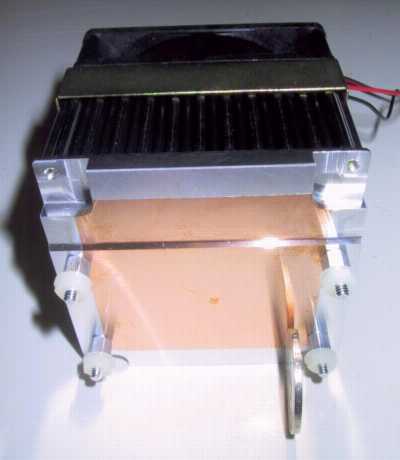 The PAL8045 is fixed to the motherboard, using screws.  This means that you will have to uninstall the motherboard in order to install the cooler, but it does hold the heatsink a lot more safely than the "clip" mounting. The pressure to the CPU is provided by springs; in order to adjust the pressure to the particular CPU (there are noticable tolerances in thickness!), several nylon washers are included. Since the PAL8045 is quite large and heavy, Alpha made the right choice when they decided to use the screw mounting. Swiftech were the first to take advantage of this mounting method, it's good that others follow. The disadvantage is that you won't be able to use the PAL8045 for Intel CPUs, because of the lack of mounting holes on the motherboard.

The PAL8045 sample we received came with an Orix fan. But just like previous Alpha models, the PAL8045 will be available with a variety of fans, since Alpha commonly sells heatsinks alone and retailers bundle them with a choice of fans. This leaves customers the choice between a high performance and an ultra quiet solution.

To make it short: The PAL8045 could convince in all setups.

With the high performance Delta fan, it provided the best cooling performance of all coolers we tested so far, even slightly outperforming the Swiftech MC462. This makes it the top choice for ambitious overclockers. The price for this, besides the high price tag, is excessive noise.

With the Orix fan, the PAL8045 still provides very good cooling performance, while being quieter than the competitors equiped with 60mm 7000rpm Delta fans. This configuration is still not super-quiet, but is definately a good choice for those who want a cooler for extreme overclocking that isn't excessively loud. 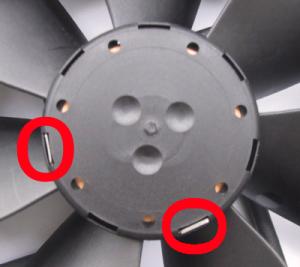 The Papst fan we received for testing was a 8412NGL unit, which is the quietest Papst 80mm fan.Thanks to its Sintec PTFE sleeve bearing, it is extremely quiet. Another "speciality" of Papst fans is that, in order to prevent vibrations, they are exactly balanced, thanks to tiny metal weights sticked into little slots around the fan motor - as you can see on the picture on the right, the weights are marked with red circles.

With this Papst fan, the PAL8045 a good choice for a super-quiet, high performance PC. It is even quieter than the Silverado in quietest mode, while providing better cooling performance. Still, we don't recommend the Alpha/Papst combination for overclocking, but it does provide enough cooling even for the most power-hungry non-overclocked Socket A CPU, the Athlon 1.4GHz.

Only the Zalman CNPS3100s in low RPM mode are quieter - but these don't cool as well as the Alpha with Papst fan.

The ideal setup for a super-quiet PC would be the Alpha heatsink with a temperature controlled fan - preferably with an external temperature sensor. Such fans are also available from Papst (e.g. model 8412NGMLV); however ideal placement of the sensor would require modification of the heatsink (like drilling a hole in the base to accomodate the sensor).