More than just a letter

We first introduced you to the KT266A in our Computex coverage as the KT266 rev 2.  The goal of this chipset revision was simple; to outperform the SiS 735 and provide competition for NVIDIA’s nForce.  It definitely played to VIA’s advantage that motherboard manufacturers in were very willing to share performance figures of NVIDIA’s reference nForce boards as well as their own designs.  Along with most of you all, VIA had already seen what the SiS 735 could do so it wasn’t too difficult to aim for a target with hopes of outperforming it.

The end result is the VIA KT266A which from an architectural standpoint is nothing more than the original KT266 with an updated .  The VT8366A (the original KT266 North Bridge was the VT8366) has two major enhancements: an improved memory controller and deeper internal buffers. 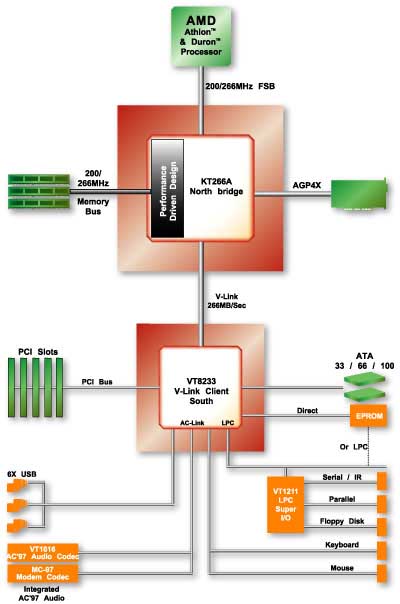 VIA is being very tight lipped about the exact improvements surrounding the new memory controller however we have some educated guesses.  We know that the DDR memory controller in VIA’s recently released P4X266 chipset features some enhancements compared to the KT266.  These enhancements most likely have to do with sizes of internal data pathways and maybe even an intelligent write cache.  Two other recently announced chipsets have included such features: Intel’s 845 and NVIDIA’s nForce.  It isn’t too far of a stretch to assume that VIA would pursue a similar option to improve the performance of their memory controller for the P4X266; remember that the Pentium 4 is a much more memory bandwidth dependent platform than the Athlon, so a high speed memory controller is absolutely necessary for the chipset to be successful.  When applied to the KT266, these enhancements would give the Athlon a bit of a performance boost as well.

There’s no question about it that the P4X266 featured deeper internal read/write buffers than the KT266.  The benefit of deeper buffers is that the CPU can get back to processing quicker after having sent data out to be written to main memory.  At the same time, a more uninterruptible stream of data can be guaranteed from main memory to the CPU.  As CPUs and their FSBs increase in frequency, the reliance on deeper buffers is necessary to ensure performance.  When applied to the KT266 chipset, the Athlon can definitely benefit from better write buffering; remember that the Athlon is no lightweight when it comes to FSB traffic.

Finally, there are a number of timings that can be improved on over time as a manufacturer becomes more familiar with how their chipset performs.  This is a confirmed source of some of the performance gain offered by the KT266A.