Just because Intel is the largest CPU manufacturer in the world doesn't mean that the Intel Developer Forum can't be about more than just CPUs. The demo showcase at this year's Fall IDF had some interesting technology being shown off but most of it is stuff that we have seen before.

With the rising temperature of today's CPUs it is quickly becoming necessary to improve cooling within the chassis. Something many retail manufacturers have been doing for years was implementing passive cooling (for example, just a heatsink) on the CPU and using case fans to remove heat from the processor. 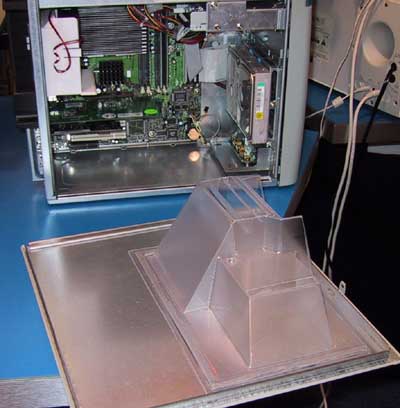 Intel had a demonstration of a very cheap duct system that was based on this principle of passive CPU cooling but active case cooling.

Another big thing being promoted by Intel at the Forum was the idea of a quiet PC. Intel's boxed Pentium 4 processors are very quiet since their fans only spin at 3000RPM.