Although sequential performance is important, a true staple of any multi-user server is an IO load that appears highly random. For our small block random read test we first fill all drives sequentially, then perform one full drive write using a random 4K pass at a queue depth of 128. We then perform a 3 minute random read run at each queue depth, plotting bandwidth and latency along the way. 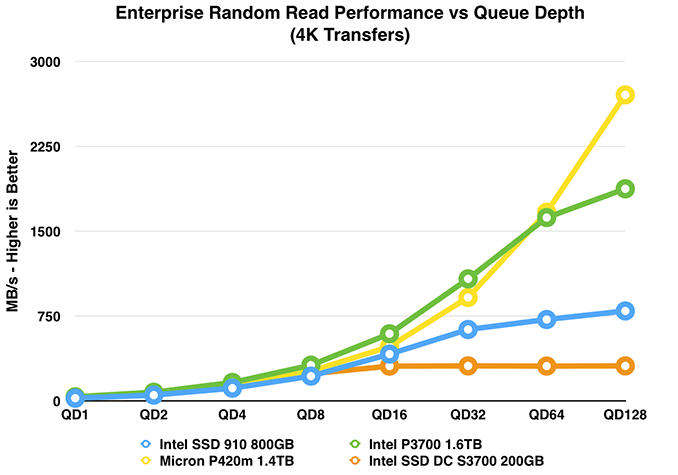 Random read latency is incredibly important for applications where response time matters. Even more important for these applications is keeping latency below a certain threshold, what we're looking for here is a flat curve across all queue depths: 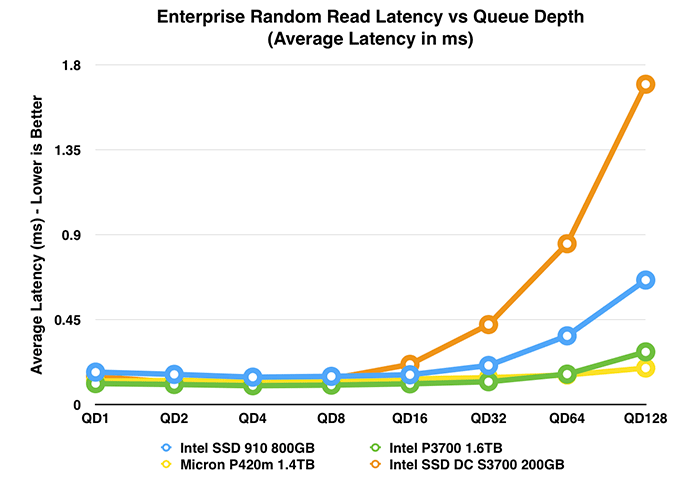 And that's almost exactly what the P3700 delivers. While the average latency for Intel's SSD DC S3700 (SATA) sky rockets after QD32, the P3700 remains mostly flat throughout the sweep. It's only at QD128 that we see a bit of an uptick. Even the 910 shows bigger jumps at higher queue depths.

If we remove the SATA drive and look exclusively at PCIe solutions, we get a better idea of the P3700's low latencies: 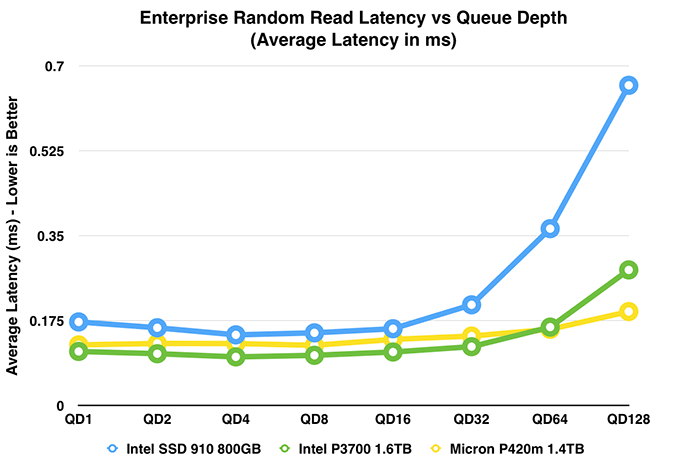 In this next chart we'll look at some specific numbers. Here we've got average latency (expressed in µs) for 4KB reads at a queue depth of 32. This is the same data as in the charts above, just formatted differently: 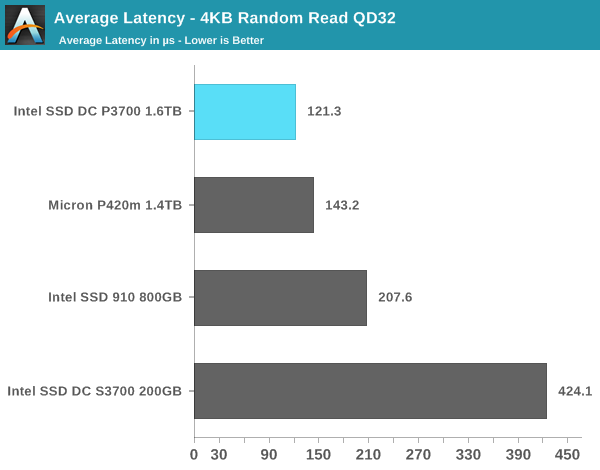 The P3700's latency advantage over its SATA counterpart is huge. Compared to other PCIe solutions, the P3700 is still leading but definitely not by as large of a margin. Micron's P420m comes fairly close.

Next up is average latency, but now at our highest tested queue depth: 128. 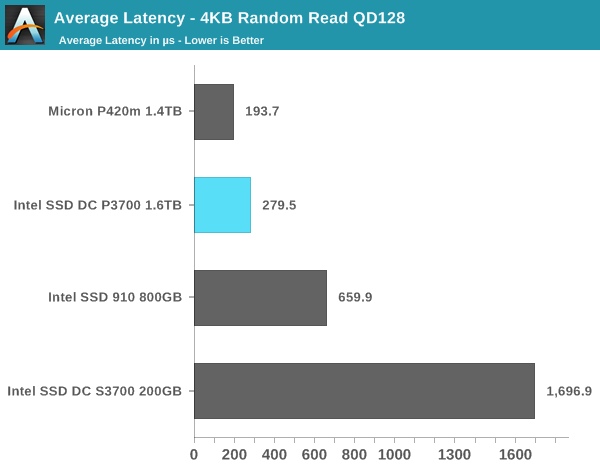 Micron's P420m definitely takes over here. Micron seems to have optimized the P420m for operation at higher queue depths while Intel focused the P3700 a bit lower. The SATA based S3700 is just laughable here, average completion latency is over 1.6ms. 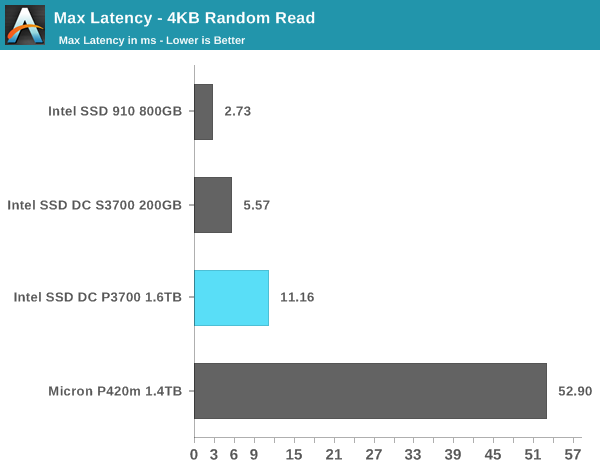 The 910's max latencies never really get out of hand. Part of the advantage is each of the 910's four controllers only ever see a queue depth of 32, so no individual controller is ever stressed all that much. The S3700 is next up with remarkably consistent performance here. The range of values the S3700 had was 2ms - 10ms, not correlating in any recognizable way to queue depth. Note the huge gap between max and average latency for the S3700 - it's an order of magnitude. These high latency events are fairly rare.

Micron's P420m runs the longest background task routine of anything here, averaging nearly 53ms. Whatever Micron is doing here, it seems consistent across all queue depths. 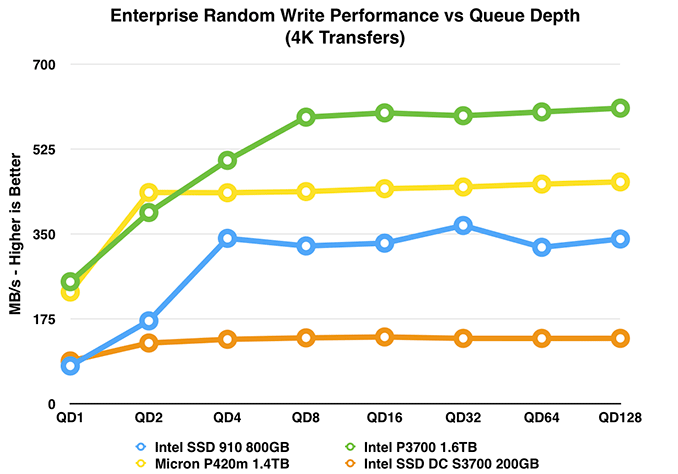 Despite the more strenuous workload, the P3700 absolutely shines here. We see peak performance attained at a queue depth of 8 and it's sustained throughout the rest of the range. 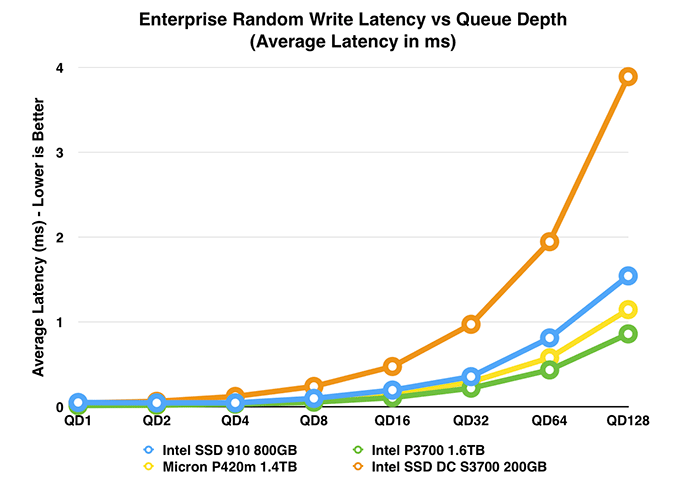 Average latency is also class leading - it's particularly impressive when you compare the P3700 to its SATA counterpart. 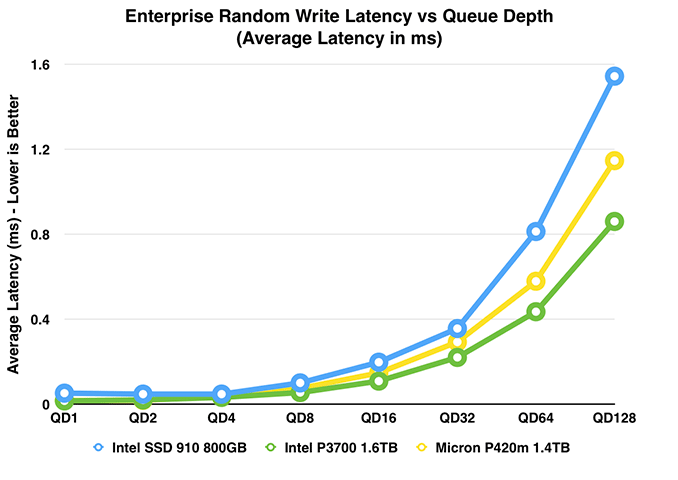 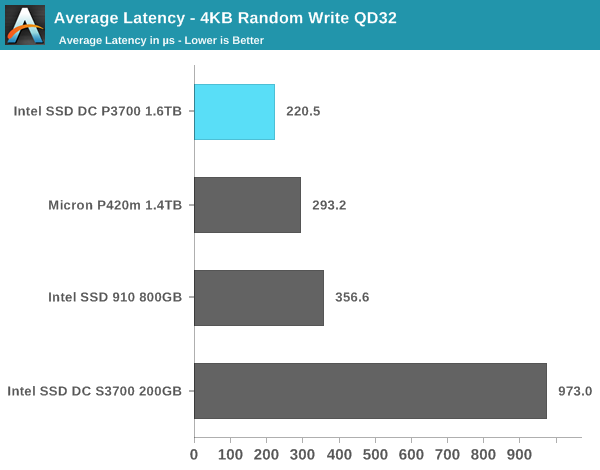 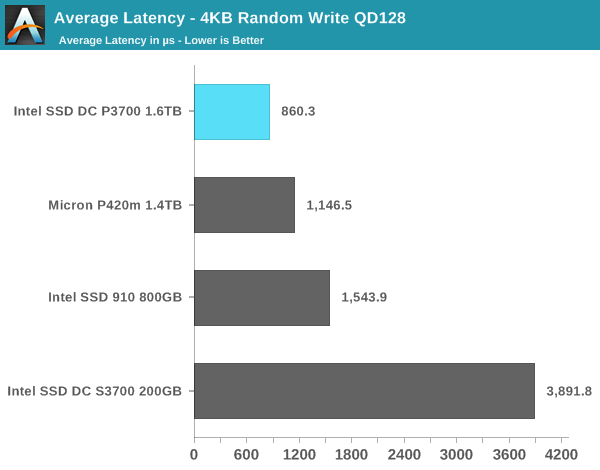 The absolute average latency numbers are particularly impressive. The P3700 at a queue depth of 128 can sustain 4KB random writes with IOs completing at 0.86ms. 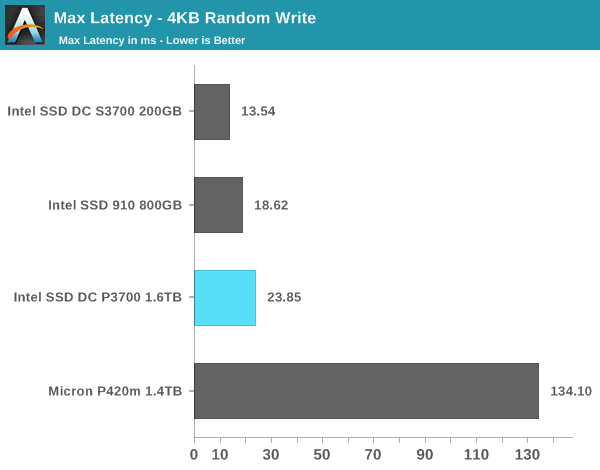