Since the XP941 is currently only bootable in Macs, I decided to run some benchmarks with the XP941 inside a Mac Pro. The specs of the Mac Pro are as follows:

We would like to thank RamCity for providing us with the Mac Pro, so we were able to run these tests and confirm boot support.

I installed OS X 10.9.2 to all drives and they were the boot drives when benchmarked, just like they would be for most end users. As I mentioned on page one, RamCity actually sent us two 512GB XP941 and I just had to put them in RAID 0 configuration. With a Mac you can easily boot from a software RAID 0 array, so all I had to do was to create a RAID 0 array in Disk Utility and select it as the boot volume. I placed the drives in PCIe slots 2 and 4 to ensure that both drives were getting full PCIe bandwidth and we wouldn't run into bottlenecks there. I picked Intel's 480GB SSD 730 to be the comparison point as it was lying on my table and is among the fastest SATA 6Gbps SSDs in the market. Note that the 2009 Mac Pro only supports SATA 3Gbps, so there's obviously some performance penalty from that as the benchmarks show.

QuickBench is one of the more sophisticated drive benchmark tools for OS X. It's shareware and retails for $15 but compared to the freeware tools available, it's worth it. While QuickBench lacks the option to increase queue depth, it supports various transfer sizes from 4KB to up to 100MB (or more through a custom test). For this test, I just ran the standard test where the IO sizes range from 4KB to xMB. Additionally I ran the extended test, which focuses on very large IOs (20-100MB) in order to get the maximum performance out of the drives. In both cases the tests ran for 10 cycles to ensure sustained results. 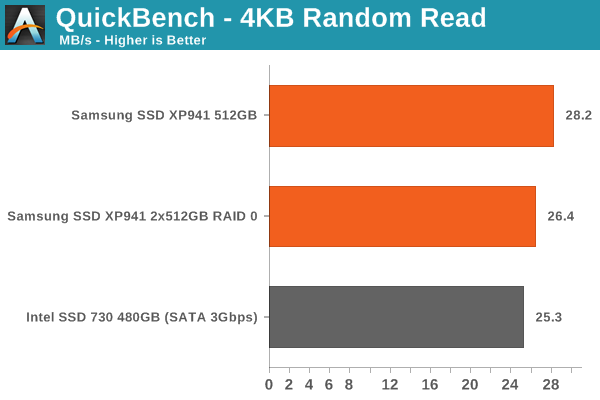 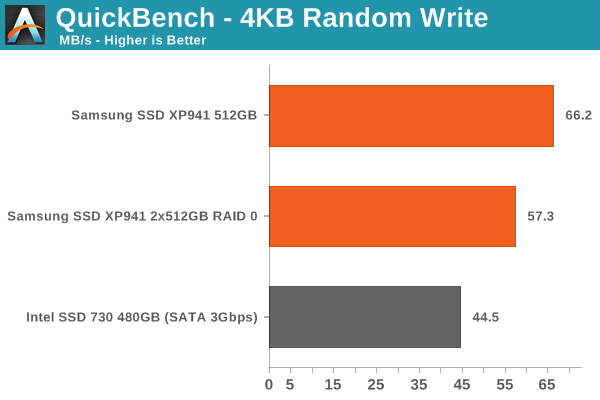 The random results don't reveal anything interesting. The RAID 0 array is slightly slower due to the overhead from the software RAID configuration but overall the results make sense when compared with our Iometer scores. Bear in mind that QuickBench only uses queue depth of 1, whereas our Iometer tests are run at queue depth of 3, hence there's a difference that is roughly proportional to the queue depth. 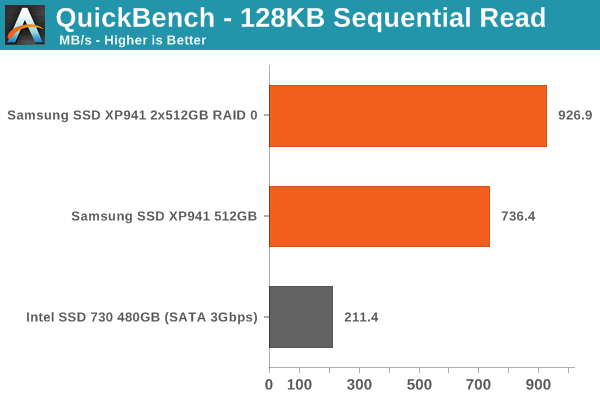 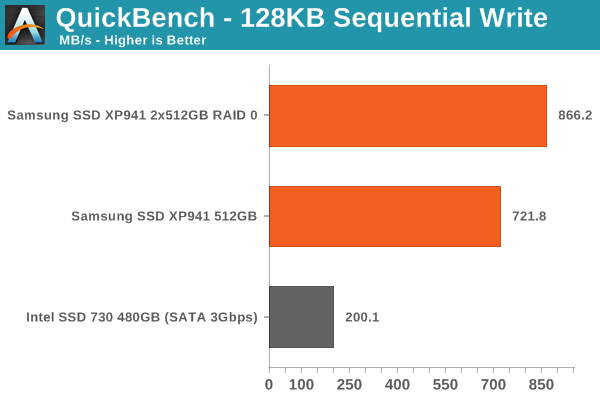 The sequential tests show that the XP941 seems to be slightly slower in the Mac Pro compared to sequential performance in Iometer. In this case both tests are at a queue depth of 1 and should thus be comparable, but it's certainly possible that there are some other differences that cause the slightly slower performance. Either way, we are still looking at much, much higher performance than any drive would provide under the Mac Pro's native SATA 3Gbps interface. 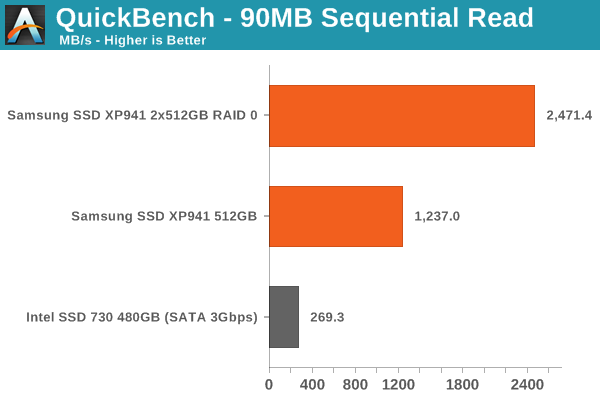 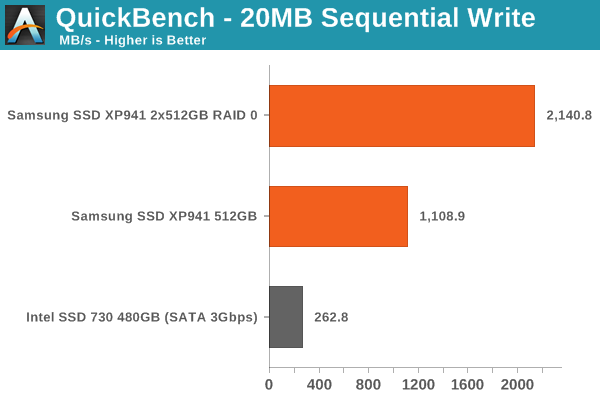 Since QuickBench doesn't allow increasing the queue depth, the only way to increase performance is to scale the transfer size. QuickBench's preset tests allow for up to 100MB IO sizes and I ran the preset that tests from 20MB to 100MB and picked the highest perfoming IO sizes that were 90MB and 20MB in this case. There wasn't all that much variation but these seemed to be the highest performing IO sizes for all three configurations.

Now the XP941 and especially RAID 0 show their teeth. With two XP941s in RAID 0, I was able to reach throughput of nearly 2.5GB/s (!) and half of that with a single drive. Compared to the SSD 730 in the SATA 3Gbps bus, you are getting over four times the performance and to reach the performance of X941 RAID 0 you would need at least ten SSDs in a SATA 3Gbps RAID 0 configuration.

In addition to QuickBench, I decided to run AJA System Test as it's a freeware tool and quite widely used to test disk performance. It's mainly designed to test the performance of video throughput but as the results are reported in megabytes per second, it works for general IO testing as well. I set the settings to the maximum (4096x2160 10-bit RGB, 16GB file size) to product the results below. 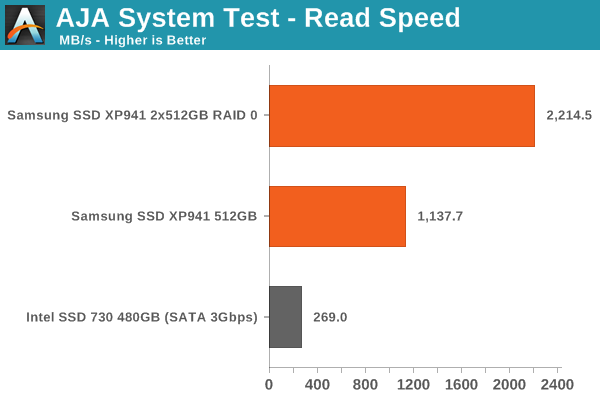 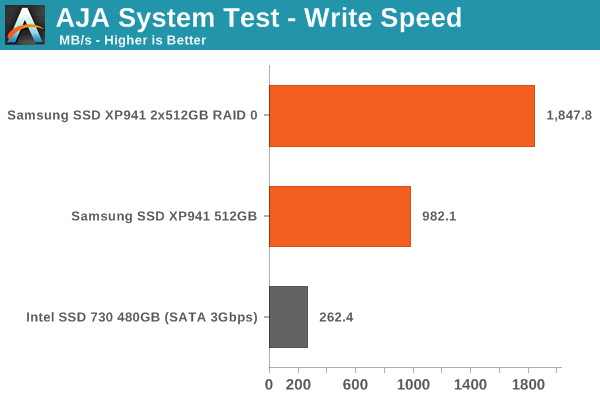 The results are fairly similar to the QuickBench ones but the performance seems to be slightly lower. Then again, this is likely due to the difference in the data the software uses for testing but the speeds are still well over 1GB/s for a single drive and 2GB/s for RAID 0.

One of the most common criticism I hear towards our tests is that we don't run any real world tests. I've been playing around with real-time testing a lot lately in order to build a suite of benchmarks that meet our criteria but for this review I decided to run a quick installation benchmark to see what kind of differences can be expected in real world. I grabbed the latest version of Photoshop CS6 trial from Adobe's website and installed it to all three drives while measuring the time with a stopwatch. 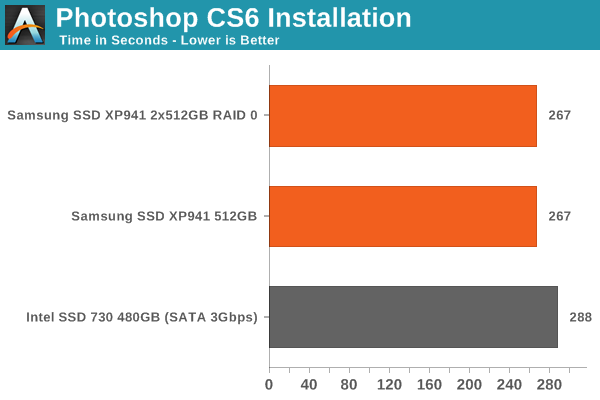 Obviously the gains are much smaller in typical real world applications. That's because other bottlenecks come to play, which are absent when only testing IO performance. Still, especially for IO heavy workloads the extra performance is always appreciated even if the gains aren't as substantial as benchmarks show.