Booting from PCIe devices has always been rather quirksome because the BIOSes in motherboards are designed to boot from SATA devices, as they usually do. Most PCIe SSDs and SATA adapters include boot support by loading special drivers before the BIOS, which makes the drive visible in the boot screen. Without the drivers the drive won't show up in the BIOS but once you boot into the OS it will be accessible like any other drive. The problem is, you can't boot from the drive unless it shows up in the BIOS' boot screen.

Unfortunately, the XP941 doesn't seem to include the drivers necessary to enable booting. At least no driver loading screen shows up during boot, which suggests that the XP941 doesn't even have such drivers (ASUS is also telling us that this is the case). I'm thinking that the XP941 is designed for UEFI booting because from what I have heard, you don't need the drivers for UEFI boot but there is still some sort of a UEFI key needed to make the drive bootable. I did try the UEFI boot method on my ASUS Z87 Deluxe board but even though I was able to install the OS to the drive just fine, it wouldn't show up in the boot order.

The good news is that 9-series chipsets bring some ease to the situation. Back when the 8-series was introduced, there weren't many PCIe SSDs on the market but this year we will see PCIe entering the mainstream segment. That obviously forces the motherboard manufacturers to work on PCIe boot support and we can confirm that at least AsRock's Z97 Extreme6, which has a PCIe 2.0 x4 M.2 slot, supports booting from the XP941 out of the box. Whether other 9-series motherboards support booting from the XP941 remains to be seen. Most manufacturers, however, seem to be limiting the M.2 slot to just two PCIe 2.0 lanes, so you wouldn't want to use the XP941 in those boards anyway (unless the XP941 is used in a standard PCIe slot with an adapter). Anyway, we'll be sure to investigate the bootability of the XP941 in our motherboard reviews and work with the OEMs in order to bring better support for PCIe booting.

Update 5/20: ASUS just sent me an email that all their Z97 based motherboards will get a BIOS update that enables booting from the XP941. The BIOS is currently in beta testing and ASUS is expecting public release in about two weeks.

Macs, on the other hand, can boot from the XP941 just fine. I confirmed this using an early 2009 Mac Pro and the volume in the drive shows up in the boot option screen just like any other volume does. I have to admit that I don't know why exactly this is the case, but I'm guessing it's a fundamental difference between how the EFI in Macs and the BIOS/UEFI in PCs handle device recognition. 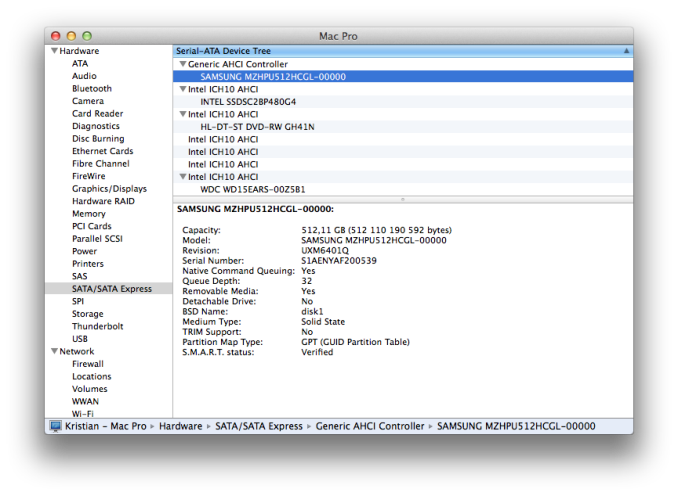 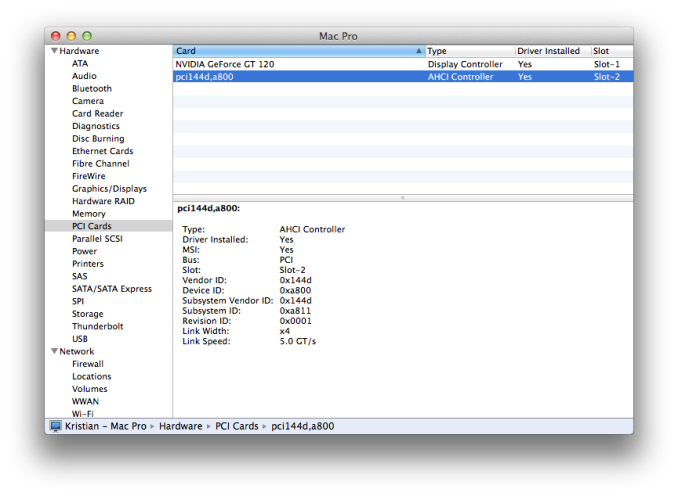 Under OS X, the XP941 shows up like any other SATA device. Since it utilizes the AHCI command set, OS X thinks it's a SATA device even though it's not. However, it's also listed under PCI cards but the page doesn't provide any meaningful info.