Keeping things in line with the One (M8), the One mini 2 also runs HTC’s Sense 6 UI on top of Android 4.4.2. Surprisingly, in this regard the experience ends up being generally solid, although it’s definitely slower at times than the One (M8). This ultimately boils down to the SoC, and while the quad core Cortex A7 is more than enough to run the main UI smoothly, things like rendering intensive webpages take longer and in general there’s just more waiting time going on in the UI that reduces responsiveness in the OS, something that isn't felt in a phone like the Moto G or phones with lighter skins. Overall though, Sense 6 continues to be good, although there are some changes that have the potential to annoy the user. These are mostly in the camera UI, and while it’s arguably easier to use now, the loss of simple things such as the dual shutter is disappointing, and the strangely artificial divide between scene modes and camera modes can be irritating as well.

Outside of these small regressions though, Sense 6 remains an actual selling point for the phone, rather than against it. The UI is now completely lacking gradients, and fits in visually with most Holo applications, although HTC deviates from the standard Holo blue and grey in favor of other colors, depending upon the theme. Very few applications are duplicates of Google applications. Even the ones that are duplicates of Google applications are ultimately meant for a different purpose, such as the email application for Exchange or other email services outside of Gmail. However, as always, opinions on OEM UIs will always be divisive, and ultimately a personal decision. For more information on the Sense 6 UI, I would reference the HTC One (M8) review.

Ultimately, the bigger issue with software experience is what has been left out. The noticeable lack of sensors, presumably to lower costs, means most of the motion launch gestures have disappeared, and the pedometer is gone as well. The power saver mode interestingly does not seem to effect the CPU governor at all, as max frequency stays capped at 1.2 GHz and the difference between the two means when running a benchmark is too close to point to a change in governor. Extreme power saver mode also doesn’t seem to change the governor either, but this would make sense based upon the low power consumption of the Cortex A7s.

The original HTC One mini used a Snapdragon 400 SoC, Qualcomm's MSM8930 to be exact. The new One mini 2 also uses a Snapdragon 400, but it's a different SoC: the MSM8926. I've highlighted the differences in the table below:

The old SoC featured two of Qualcomm's own Krait 200 cores running at up to 1.4GHz, while the new chip has four ARM Cortex A7 cores running at up to 1.2GHz. I've been spending a lot of time looking at SPECint performance of mobile CPU cores and I think I have a good idea of how Krait 200 stacks up to ARM's Cortex A7. Krait 200 delivers lower IPC in SPECint than ARM's Cortex A7. The difference is small (~9%) but at the same frequency, a Cortex A7 should be faster than a Krait 200. In the case of the One mini vs. One mini 2, the Krait 200 version has a 16% higher max frequency. Whether the new mini is faster or slower than its predecessor depends on just how high of a frequency the old mini is running at. Assuming there's no thermal throttling at play, the original mini may hold a slight performance advantage (~4 - 5%). I suspect ARM's Cortex A7 draws less power however, so we may see situations where the gap narrows. Of course the new SoC has twice as many CPU cores, so in heavy multitasking scenarios or running any applications that stress more than two cores the new mini will see an advantage. Unfortunately this is the tradeoff that many SoC vendors have been forced to make. Rather than pushing for two cores with substantially higher IPC, we have four cores with a mild increase in IPC from one generation to the next.

GPU performance should be comparable between the two devices.

As the Moto G showed us, ARM's Cortex A7 is fast enough to run Android and most apps - particularly when backed by Qualcomm's Adreno 305 GPU. Generally speaking, the One mini 2 is fine from a performance perspective. The one difference between the mini 2 and the Moto G however is Sense 6 feels a bit too heavy for the CPU setup. There's a reduction in responsiveness on the mini 2 that the Moto G avoids by using a much lighter weight UI (thanks to it being mostly stock Android). Had HTC waited for the Snapdragon 410 my guess is it would've been fine, but as it stands I think I'd prefer a hypothetical Google Play Edition of the One mini 2.

As expected, there original One mini manages to pull ahead of the One mini 2 in all of our CPU tests. Although ARM's Cortex A7 is higher IPC than Krait 200, the latter runs at a higher frequency which gives it the slight performance edge. It's only in situations where more than two cores are in use where the new MSM8926 based SoC will do better than its predecessor. 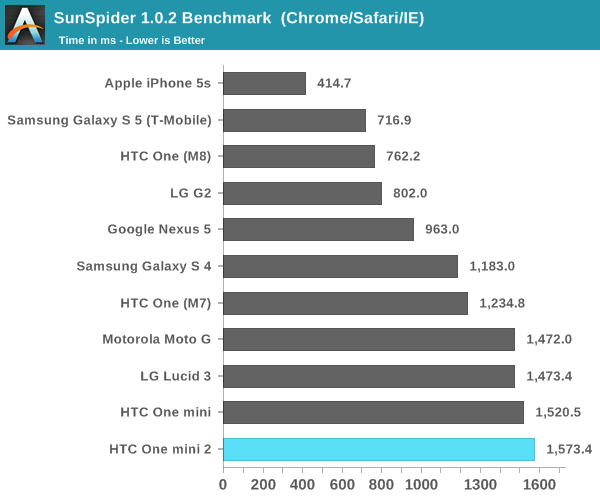 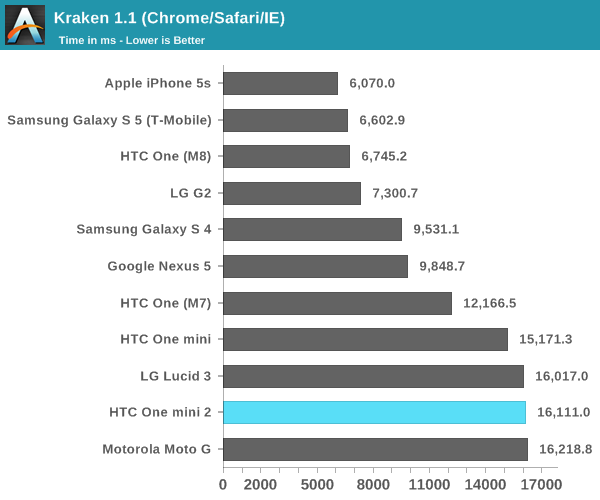 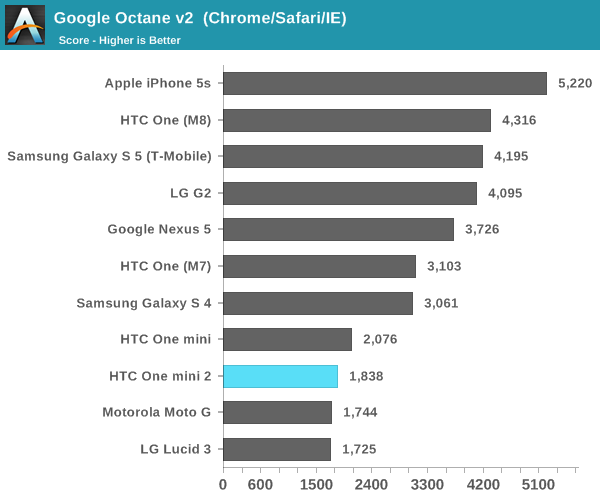 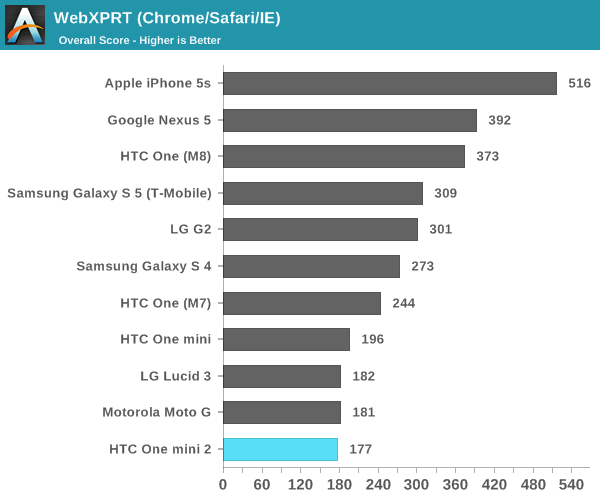 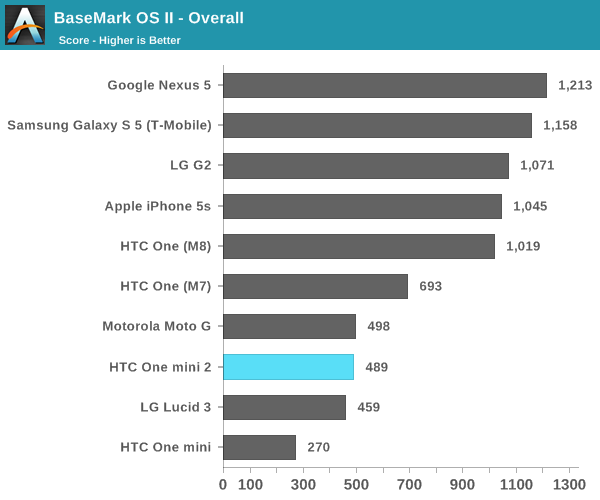 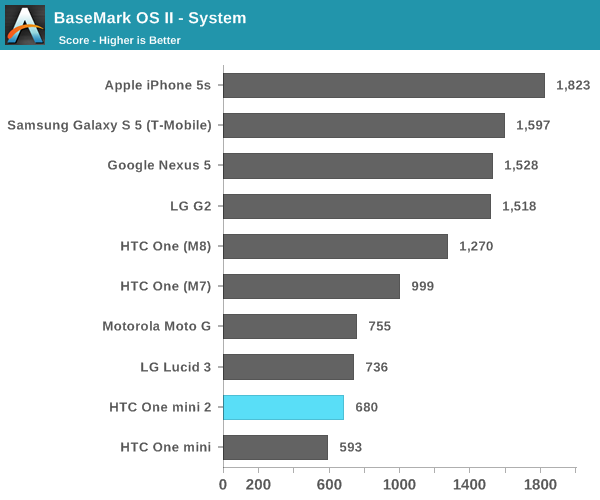 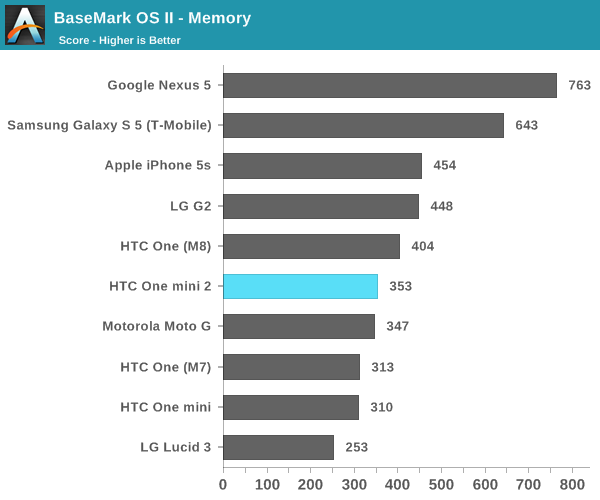 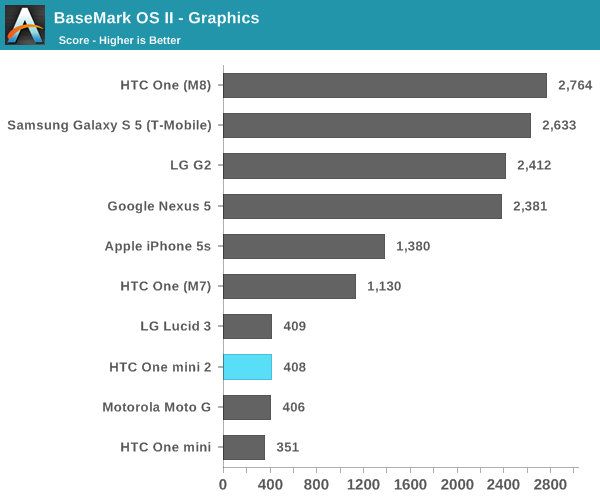 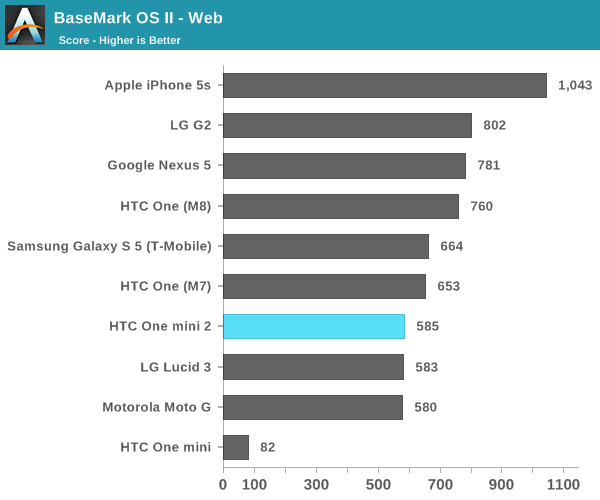 At a high level, GPU performance is effectively unchanged between the One mini and One mini 2. The tests below will show some differences, but they're simple to understand. 3DMark's Physics test is well threaded and takes advantage of all four cores in the One mini 2, the result is a 54% increase in performance over the One mini.

The GFXBench T-Rex HD offscreen test shows the old and new mini devices performing fairly closely to one another. 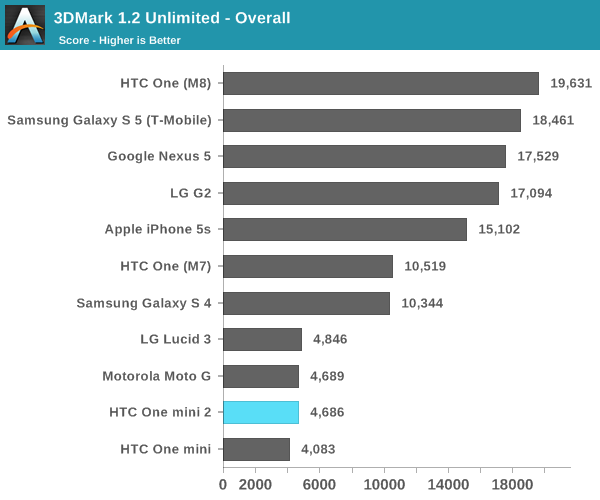 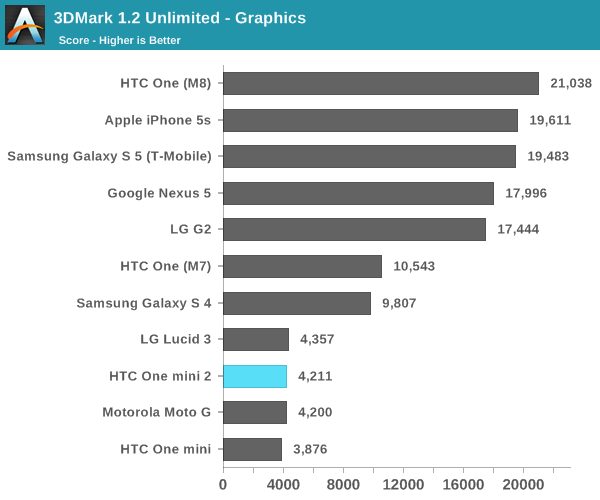 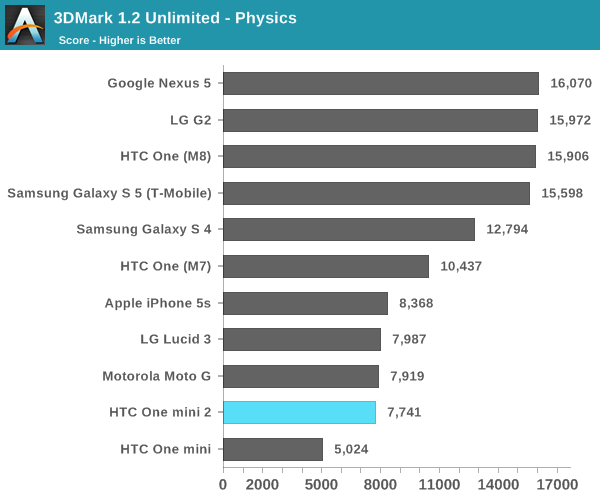 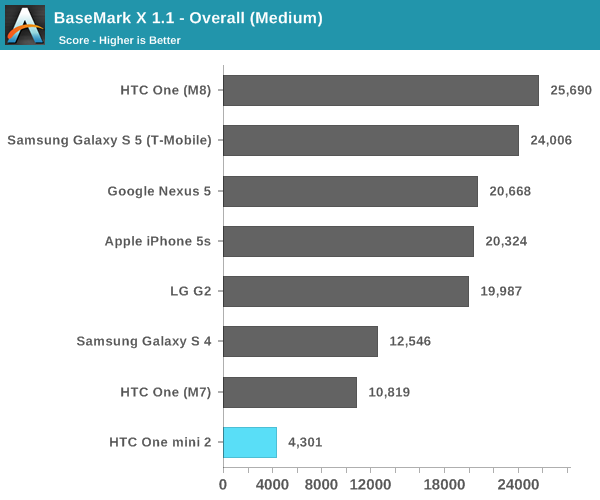 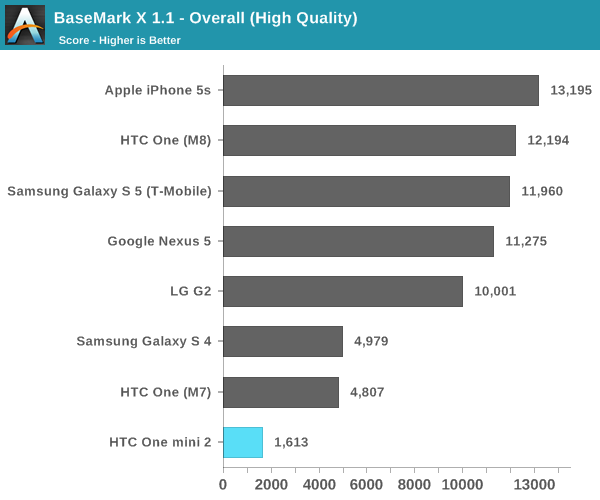 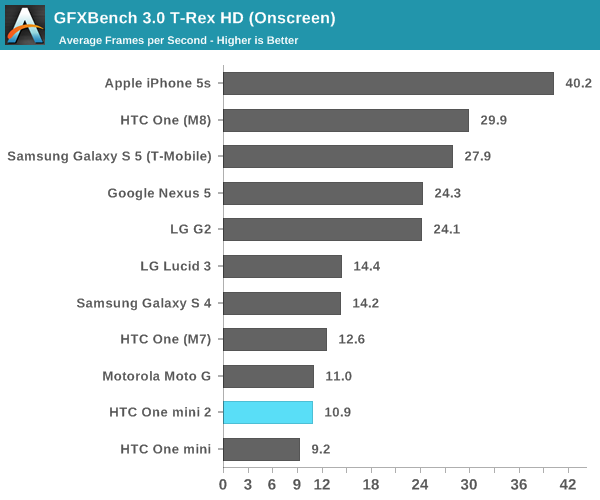 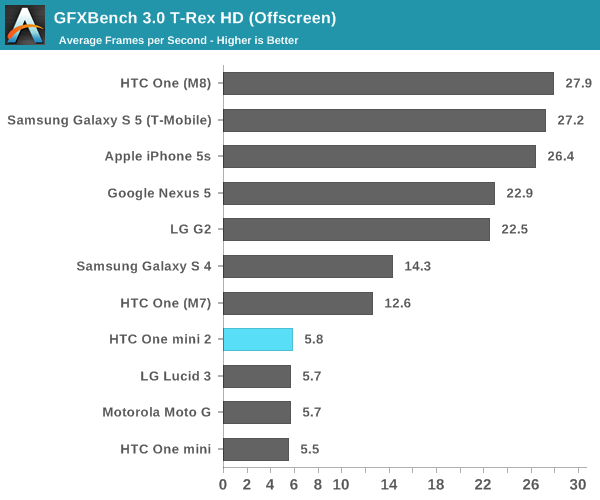 The One mini 2 features 16GB of internal NAND as well as a microSD card slot for external expansion. The internal NAND definitely lacks in random read/write performance, but has absolutely modern sequential IO performance. The random read speed seems reasonable, but random write speed is a bit lower than I'd like. Sequential read performance is pretty solid - if you can keep the internal NAND relatively clean (leave ~25% free) you should have a fairly responsive device from an IO perspective. 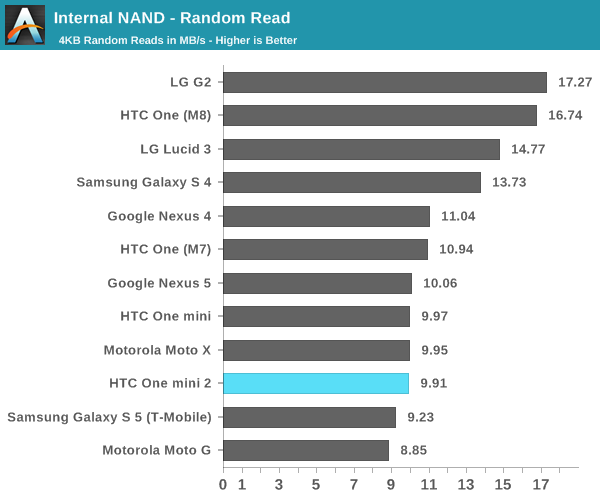 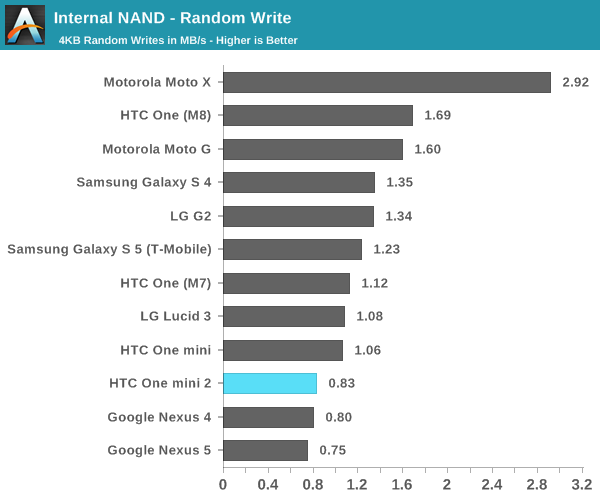 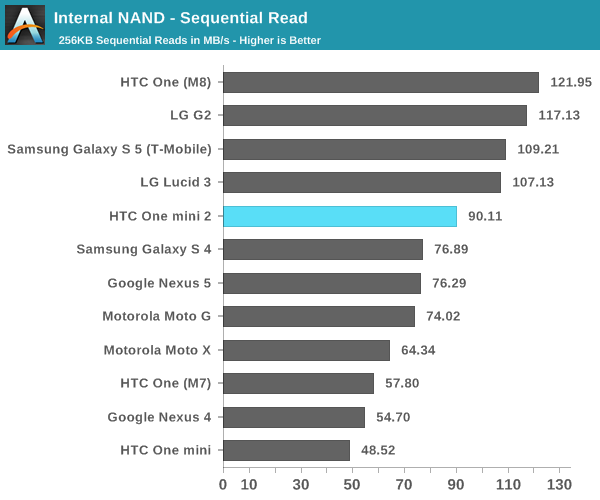 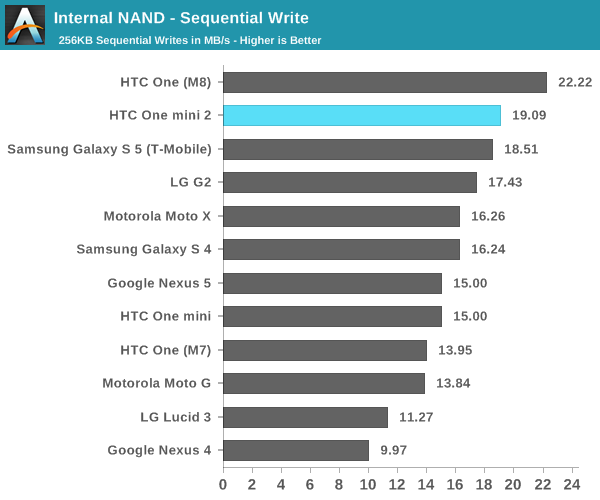