Our final set of performance benchmarks is compute performance, which for dual-GPU cards is always a mixed bag. Unlike gaming where the somewhat genericized AFR process is applicable to most games, when it comes to compute the ability for a program to make good use of multiple GPUs lies solely in the hands of the program’s authors and the algorithms they use.

At the same time while we’re covering compute performance for completeness, the high price and unconventional cooling apparatus for the 295X2 is likely to deter most serious compute users.

In any case, our first compute benchmark is LuxMark2.0, the official benchmark of SmallLuxGPU 2.0. SmallLuxGPU is an OpenCL accelerated ray tracer that is part of the larger LuxRender suite. Ray tracing has become a stronghold for GPUs in recent years as ray tracing maps well to GPU pipelines, allowing artists to render scenes much more quickly than with CPUs alone. 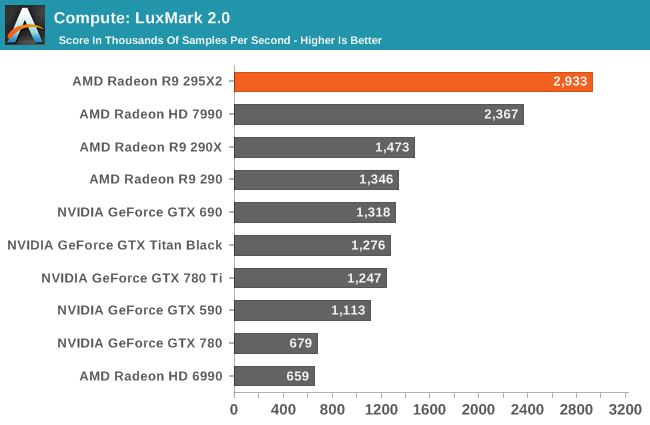 As one of the few compute tasks that’s generally multi-GPU friendly, ray tracing is going to be the best case scenario for compute performance for the 295X2. Under LuxMark AMD sees virtually perfect scaling, with the 295X2 nearly doubling the 290X’s performance under this benchmark. No other single card is currently capable of catching up to the 295X2 in this case.

Our second compute benchmark is Sony Vegas Pro 12, an OpenGL and OpenCL video editing and authoring package. Vegas can use GPUs in a few different ways, the primary uses being to accelerate the video effects and compositing process itself, and in the video encoding step. With video encoding being increasingly offloaded to dedicated DSPs these days we’re focusing on the editing and compositing process, rendering to a low CPU overhead format (XDCAM EX). This specific test comes from Sony, and measures how long it takes to render a video. 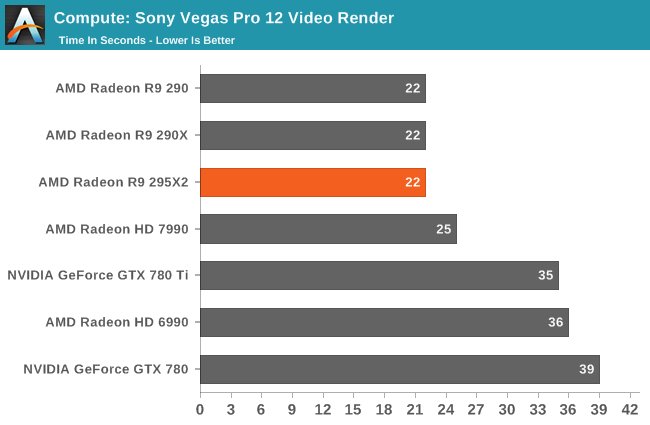 Sony Vegas Pro on the other hand sees no advantage from multiple GPUs. The 295X2 does just as well as the other Hawaii cards at 22 seconds, sharing the top of the chart, but the second GPU goes unused.

Our third benchmark set comes from CLBenchmark 1.1. CLBenchmark contains a number of subtests; we’re focusing on the most practical of them, the computer vision test and the fluid simulation test. The former being a useful proxy for computer imaging tasks where systems are required to parse images and identify features (e.g. humans), while fluid simulations are common in professional graphics work and games alike. 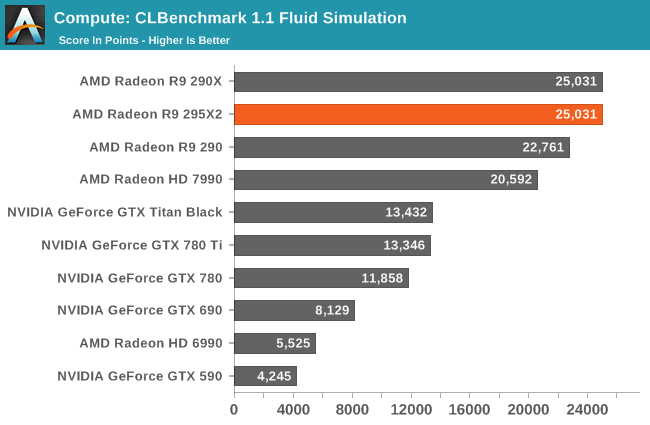 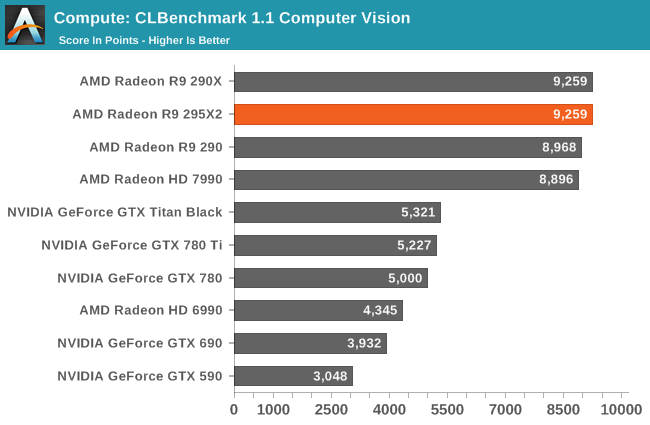 Like Vegas Pro, the CLBenchmark sub-tests we use here don't scale with additional GPUs. So the 295X2 can only match the performance of the 290X on these benchmarks.

Moving on, our fouth compute benchmark is FAHBench, the official Folding @ Home benchmark. Folding @ Home is the popular Stanford-backed research and distributed computing initiative that has work distributed to millions of volunteer computers over the internet, each of which is responsible for a tiny slice of a protein folding simulation. FAHBench can test both single precision and double precision floating point performance, with single precision being the most useful metric for most consumer cards due to their low double precision performance. Each precision has two modes, explicit and implicit, the difference being whether water atoms are included in the simulation, which adds quite a bit of work and overhead. This is another OpenCL test, as Folding @ Home has moved exclusively to OpenCL this year with FAHCore 17. 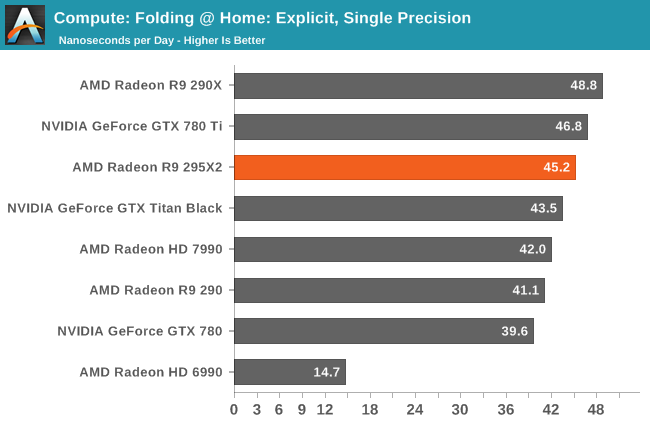 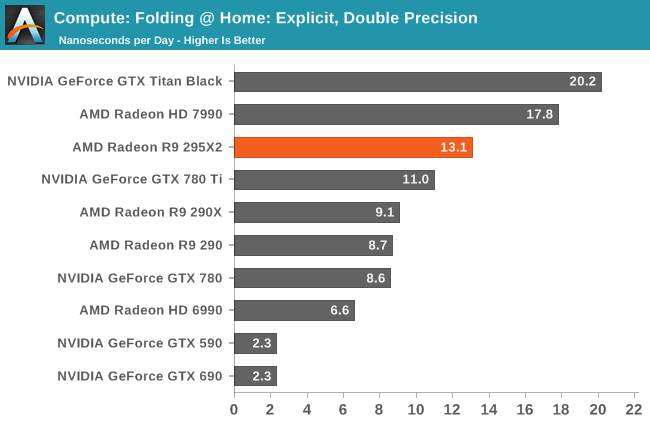 Unlike most of our compute benchmarks, Folding@Home does see some degree of multi-GPU scaling. However the outcome is really a mixed bag; single-precision performance ends up being a wash (if not a slight regression) while double-precision is seeing sub-50% scaling. 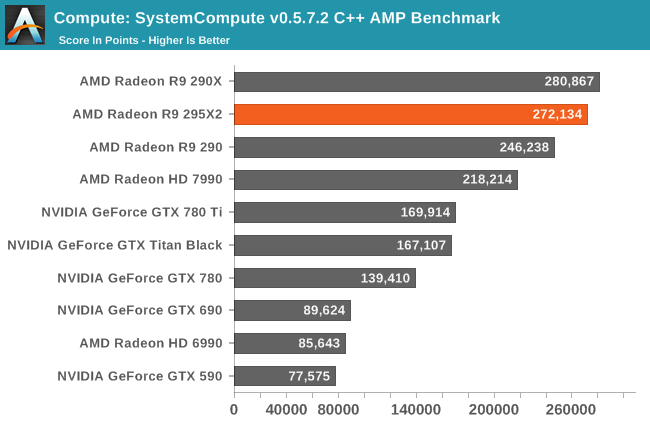 Our final compute benchmark has the 295X2 and 290X virtually tied once again, as this is another benchmark that doesn’t scale up with multiple GPUs.