The Galaxy S 5 is a healthy update to the series. With the Galaxy Note 3's release last year we saw a device that ultimately became the new flagship from Samsung. The GS5 takes the crown back for those users who want a more reasonably sized device.

The GS5 sees upgrades across the board compared to its predecessor. The underlying silicon is both faster and more power efficient. The battery is larger, and battery life has improved dramatically thanks to silicon and display upgrades. Much like the gains we saw with HTC's M7 to M8 transition, anyone who is on a Snapdragon 600 based device today is going to be incredibly happy upgrading to a Snapdragon 801 platform like the GS5.

Connectivity sees a boost with the addition of Qualcomm's envelope tracker and support for carrier aggregation on LTE. The inclusion of 2x2 MIMO 802.11ac brings WiFi performance to a new level with the GS5. 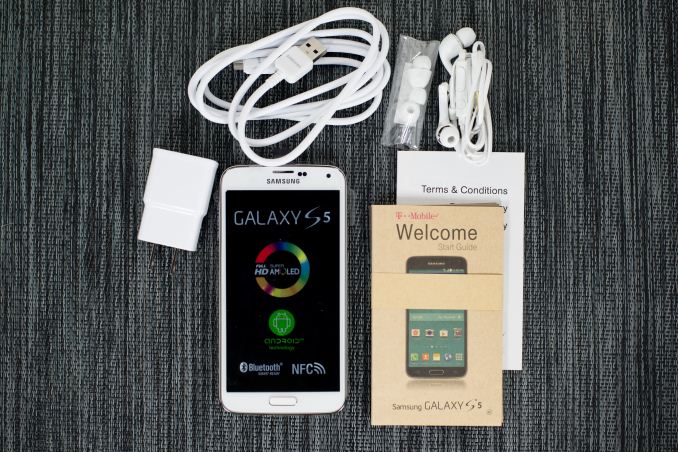 The move to Samsung's own 16MP rear facing camera sensor brings about an increase in spatial resolution, and some improvements in low light performance compared to the Galaxy S 4. I'm not totally sold on the GS5's image processing but the overall camera experience is pretty solid. I would still like to see Samsung move to a slightly lower resolution sensor with larger pixels to provide a more balanced solution. As of now the GS5 is a solid shooter outdoors and with decent light, but indoors and in low light solutions it struggles.

NAND performance is about the only downside to the GS5's hardware upgrade, mainly in that it seems to ignore random read/write performance in favor of sequential gains. Anyone who has followed our SSD coverage at AnandTech should know the issues with this approach.

Display is also dramatically improved from the Galaxy S4. Samsung's AMOLED panels have finally caught up with LCD in most of the key metrics while retaining the key advantages of AMOLED such as infinite contrast and higher power efficiency at lower average picture level.

It's not all hardware upgrades that makes the GS5 what it is. Samsung did an excellent job of cleaning up its UI from the crowded mess that we saw in GS4 to something much more polished. It's not perfect, but a huge step in the right direction. While the GS4 felt more like feature creep for use in marketing materials, the GS5's software is far better executed. 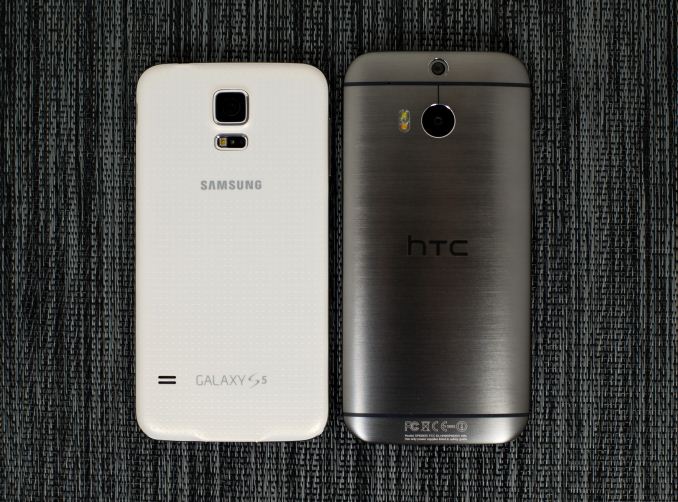 There are even some nifty additions that can come in handy. Ultra low power saving mode is one in particular that seems to have a measurable impact on battery life if you're willing to give up some performance.

Overall the Galaxy S 5 is a solid replacement to the GS4 (and definitely to any previous Samsung device). I find that pretty much all the flagships offer some set of tradeoffs that prevent any one from being the perfect device (iPhone's screen size, GS5's materials, M8's camera). It's unfortunate because I'd really like to crown a single device the king of them all, but instead we're faced with a handful of differing optimization points. Samsung got it almost perfect with the GS5. With a metal body, a rear facing camera with larger pixels (perhaps with some tweaks to camera output processing), a better NAND controller, and stereo front facing speakers, the GS5 would probably be perfect.