Defeating the optimization was just as simple: thorough renaming of the benchmark and all internal application IDs. For the past several months we’ve been working with benchmark, silicon and handset vendors to curb the behavior. Although we found the optimizations to have minimal impact on our test results, it’s still a messy practice that isn’t worth doing.

We’ve seen early (encouraging) indications that some vendors have reconsidered their position on benchmark optimizations. Unfortunately HTC isn’t quite there yet.

The M8’s Android 4.4.2 build includes a new, more subtle form of benchmark optimization that we hadn’t seen in previous devices. Benchmarks are still detected according to their application identifier, but instead of hot plugging in all CPU cores and driving them to max frequencies, everything appears to be normal at launch.

Here’s the state of the CPU cores after launching the Play Store version of any optimized benchmark: 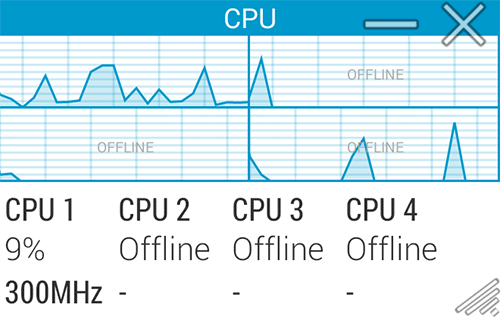 Everything looks just fine. But look at what happens if we monitor CPU frequency over time on the Play Store and a special renamed version of 3DMark: 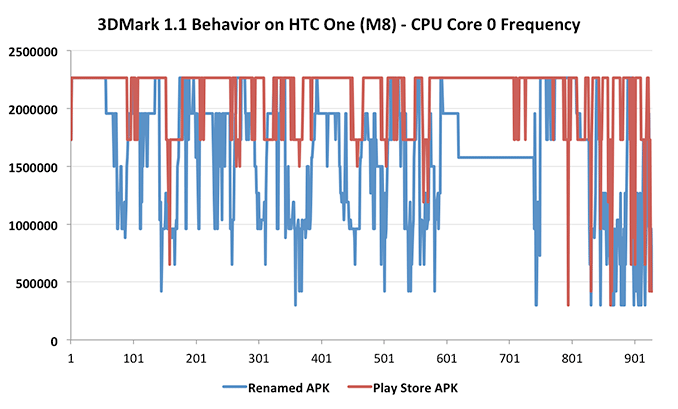 Average CPU frequency is about 15% higher while running the Play Store version of 3DMark. I still need to run some thermal analysis on the device but I don’t think HTC is raising thermal limits. Instead what appears to be happening is HTC is simply more aggressively tuning the governor response to performance demands, allowing for higher frequencies. Note that the frequency response latency is now so low that I couldn't even grab the 300MHz screenshot above in the Play Store version of 3DMark. As soon as the device detected a button press it would ramp up to 1.7GHz.

The impact on performance goes hand in hand with the increase in average clock speed. I measured performance during 3DMark’s Physics test (which is CPU bound). The difference was about 15%. 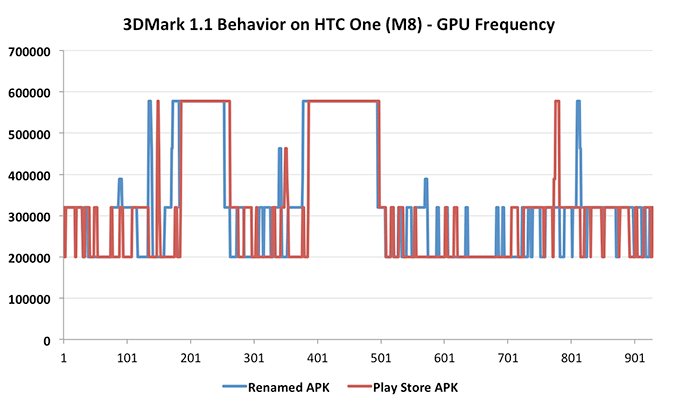 The list of optimization targets has also expanded since we last looked at HTC. The latest versions of GFXBench, BaseMark X and BaseMark OS II are now included in the benchmark whitelist.

HTC made one small concession - it’s allowing users the ability to run their device in this high performance mode at all times. Under developer tools (tap on the build number 5 times in Settings > About > Software information > More), you’ll find an option to enable high performance CPU mode. Checking that box will put your device in the same mode that’s enabled when a whitelisted benchmark is detected.

I do appreciate that HTC is exposing the optimization control, the only thing missing is the ability to toggle the benchmark optimization off (not to mention that I’d prefer if it was disabled to begin with). I fear that HTC’s justification in all of this is that everyone else is doing it so why opt out. The reality seems to be trending the other direction however. We’ll have to see what Samsung does with the Galaxy S 5, but I have a feeling that HTC is going to end up on the wrong side of history with this move. All of our benchmarks are already immune to the optimization, so it’s really a matter of sacrificing integrity for no real gain. There’s nothing more to say other than I’m disappointed.