At this point the G550 looks like nothing more than a G450 with an odd T&L engine but it’s this “odd” T&L engine that Matrox is centering the main feature of the G550 on; that feature is HeadCasting.

Matrox is positioning the G550 as the centerpiece to being able to do Graphics over IP, essentially low bandwidth video conferencing.  The problem with video conferencing over the net right now is the lack of bandwidth between the users engaging in the video conference.  This results in poor quality video, stuttering and a general loss of the original intent of being able to see the person you are talking to.  HeadCasting works in very low bandwidth situations, such as over a 56K modem connection, by only sending vertex data and relying on the G550 to manipulate a 3D model of the head of the person you are conferencing with.

1)      Both users that want to use HeadCasting must have a Matrox G550 card (if one user doesn't have a G550 the process is possible but there is a degradation in quality).  They take two pictures of their faces, one of the front of their face and one of the side (a profile).

2)      These images are sent to a company called Digimask.  Digimask has partnered with Matrox and will send you a 3D model of your head interpolated from the two pictures you emailed them.

3)      The two users will exchange 3D head models via email (or any file transfer protocol). 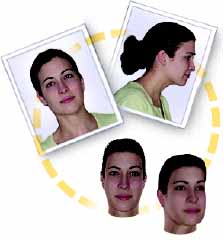 At this point you have a 3D model of your head but you haven’t done anything that requires the G550 yet.  This is where a piece of software bundled with the Millennium G550 comes into play: HeadFone.  Developed by LIPSinc, HeadFone is provided with the Millennium G550 in a version that supports Matrox’s HeadCasting (essentially their Matrix Pallette Skinning T&L engine).  This software uses voice patterns to instruct the G550’s T&L engine to move the lips on the 3D model of your head while you are speaking into a microphone.

Since your counterpart will already have a copy of your 3D head on his/her machine locally, the only data that must be sent over the net is the vertex data for the movement of your lips and the voice data of course.  This will allow for relatively lifelike movements of your 3D head’s lips over a very low bandwidth connection, such as a 56K modem. 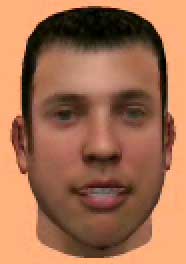 The 3D head and its animation is better than what you’d see in most 3D games, but is still far away from being realistic enough to replace video conferencing.  Although nothing is stopping from other manufacturers from offering their own HeadCasting engines, Matrox does have a bit of a leg up on the competition since their T&L core has 256 constant registers to store the appropriate animation matrices.  The GeForce3 has approximately half of that number of registers but can obviously do much more than just Matrix Pallette Skinning.  Future ATI and NVIDIA cards will be able to offer equivalent animation horsepower but for now Matrox does have an advantage in that respect.  ATI and NVIDIA could implement a feature similar to Matrox’s HeadCasting technology but with using a slightly less detailed animation process if they really wanted to become competitive in this area.

Remember that the G550’s T&L unit is only really useful for Matrix Pallette Skinning and vertex shading, which come in very handy with HeadCasting.  However since their T&L unit is so tailored to just these features Matrox has made the drivers disable the T&L unit in all applications/games other than those that are HeadCasting specific.  You’re not losing out on much since very few applications/games made use of this level of facial animation/shading.

If only one user has a G550 and they want to communicate using this technology, the user without the G550 will receive a "low definition 3D head" while the G550 user will have a higher quality version. 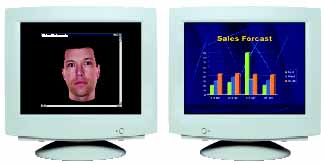 Matrox also bundles their Visual Presenter for PowerPoint with the Millennium G550; this plug-in for PowerPoint 2000 and XP allows you to record your 3D head and your voice alongside your PowerPoint presentation so that when it is viewed your 3D head appears and talks while the slideshow is running.  Since the 3D head is pre-rendered, this will play fine on all machines.  On systems with DualHead, the 3D head will have the option of being displayed on one screen while the slide show runs on another.