The G550 is much like the G450; we’ve described the few differences that exist in the chip itself here.  For more information about the G550’s feature set you can consult our original G450 review. 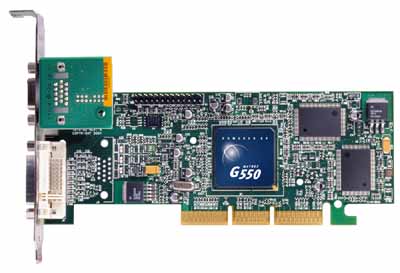 The G550 is built on a 0.18-micron process and the chip itself is pin compatible with the older G450.  This immediately tells us that there are no additional memory interface pins meaning that the G550 still has the same 64-bit DDR memory interface borrowed from the G450.  The fact that it is pin compatible makes board layout and implementation very easy, but it also means that the chip is still very memory bandwidth bottlenecked as the older G450 couldn’t even offer greater 3D performance than the original G400.  The chip supports memory configurations up to 32MB in size.

The rendering pipeline of the G550 has changed somewhat from the G450; the chip still has two rendering pipelines but now is capable of applying two textures to every pixel rendered in one clock.  For a reference point, NVIDIA introduced this feature with their GeForce2 GTS about a year ago.

The G550 is not a DX8 part although it does have some DX8 functions.  The only reason it could be somewhat considered to be one is that it has a Vertex Shader unit but no pixel shader unit.  The G550 does have a custom made T&L engine; it is a programmable RISC engine that is really only useful for one T&L function which is Matrix Pallette Skinning. 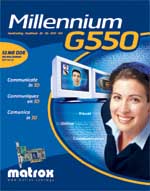 As you will remember from our ATI Radeon and NVIDIA GeForce3 reviews, Matrix Pallette Skinning allows for smooth vertices such as those that would be present in the joints of a human face or body.  Properly implemented Matrix Pallette Skinning can make a character look noticeably better than what you may be used to seeing, but it is still a relatively infrequently used function in games today.

The DualHead functionality of the G550 is virtually identical to that of the G450.  The outputs on the first G550 cards will be in the form of one 15-pin VGA connector and one DVI-I connector.  The DVI-I connector can be used as a second VGA output using a supplied converter connector.

According to Matrox, the die size of the G550 is apparently not much larger than the G450, leading us to believe that implementation of the T&L engine on the chip is not that complex.

The first cards using the G550 will be called the Millennium G550 and are going to be priced at $125.

Just like the G450, the G550 is targeted as far away from the gamer as possible.  The 3D performance of the card is in the same category as the Radeon VE or the GeForce2 MX200 although even those two should be able to offer greater performance than the G550.

For the expected performance levels of the card, if you are interested, check out our original G450 review.