The Changing State of Game Development

The entry of Microsoft and Direct3D into this world stands to significantly change the status quo, due to the fact that Direct3D is by far the most widely used PC graphics API. As the maintainer of Direct3D Microsoft gets to set the pace in the PC graphics industry in several ways, so while Direct3D 12 won’t be the first modern low level graphics API, there’s little question after this announcement that it’s going to have the widest impact on game developers.

That said, whenever we talk about low level programming it’s good to also recall who this model is and isn’t for. The purpose of abstraction is not only to provide wider hardware compatibility, but to outright hide certain types of execution ugliness from programmers. The reduction in abstraction will bring with it a reduction in the amount of this ugliness that gets hidden, and as a result the amount of knowledge needed to efficiently program at a low level goes up. Low level programing should not require a code wizard, but it’s unquestionably harder than straightforward (no optimization tricks) Direct3D 11.

Though when it comes to development, the role of middleware cannot be ignored. AMD and NVIDIA already target middleware developers for integration of their proprietary technologies, and the same concept applies on a larger scale when we’re talking about making low level programming accessible to more developers. Furthermore with the massive change in middleware licensing terms we’re seeing with this generation – Unreal Engine 4 for example is just 5% of gross revenues for smaller developers that can’t negotiate otherwise – powerful middleware is increasingly accessible to all categories of developers. So even if smaller developers can’t internally develop their own Direct3D 12 code, they will have the ability to target it by inheriting the capabilities through the middleware they use.

The introduction of Direct3D 12 stands to not only change the nature of graphics development for Windows, but on other Microsoft platforms too. With Microsoft’s consumer arm having their hand in everything from phones to consoles, Microsoft is seeking to extend Direct3D 12 and its benefits to these platforms too.

Specifically, Microsoft is already committing to bringing Direct3D 12 to the Xbox One, their current-generation console. Powered by an AMD SoC whose GPU in turn is based on GCN 1.1, the Xbox One is functionally an x86 PC with a modern AMD GPU, so the fact that this is even technically possible is not a surprise. But what does come as a surprise is that the Direct3D12 API is different enough that this is even necessary.

The Xbox One, as you may recall, uses Microsoft’s Direct3D 11.X API. This details of this API are scarce as they’re only open to registered Xbox One developers, but fundamentally it’s said to be a variant of Direct3D 11 with a number of Xbox One additions, including low level API features that would be suitable for programming a console. Having the Xbox One be in alignment with Direct3D 12 is going to be a good thing regardless – it will make porting between the platforms easier – but the fact that Direct3D 12 will bring any kind of meaningful improvement to the Xbox One is unexpected. Without more details on the Xbox One API it’s impossible to say with any certainty what exact functionality isn’t currently available in Direct3D 11.X or what kind of performance benefit this would bring the Xbox One, but it stands to reason that unless most Xbox One programmers have been doing high level programming, the gains won’t be as great as for the PC.

Moving on, we have the fact that Microsoft will also be bringing Direct3D 12 to handheld devices. We’re presumably talking about Windows RT tablets and Windows Phone phones, extending Direct3D 12 to the bottom as well as it goes to the top on the PC. Handheld devices stand to gain just as much from this as PCs and consoles do, due to the fact that handheld devices are even more CPU-bottlenecked than PC laptops and desktops, so a low level API is as much a natural development for these platforms as it is the PC. 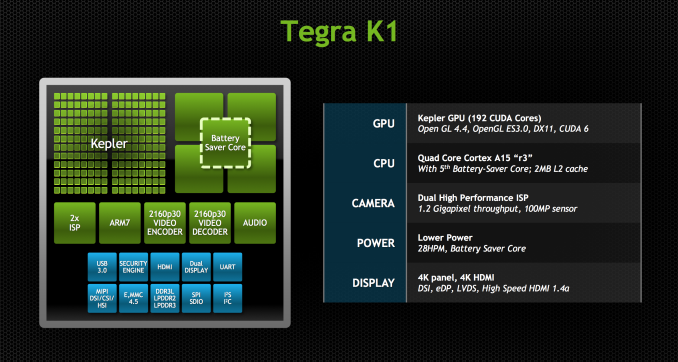 The question on our end is what kind of impact this will have on the Direct3D 12 standard with respect to abstraction. SoC-class GPUs are typically years behind PC GPUs in functionality (never mind performance), and at least among current GPUs wildly differ from each other in ways the PC GPU market hasn’t seen in years. So while extending Direct3D 12 to cover multiple PC GPUs should be relatively easy, having to support SoC GPUs certainly muddles the picture. This may mean Microsoft is looking at the long view here, when SoCs such as the Tegra K1 come along with feature sets that match recent PC architectures, coupled with the fact that Windows RT/Phone has not traditionally supported a large number of SoC GPU architectures. In which case only having to cover a handful of SoC GPU architectures instead of all 7 would certainly be an easier task.