Unlike the Milo ML04, the interior of the ML05 has been sprayed black as well. It is made from the same 0.8mm SECC steel, which is more than adequate for such a small case. As expected from a design of such proportions, the interior is not exactly roomy but the desktop format allows for direct access to all of the components. There is a small support bar, the use of which feels a little redundant, as it is only 3cm away from the massive multipurpose bracket. A small drive cage can be used to hold up to four 2.5" drives, which should be plenty for such a small system. 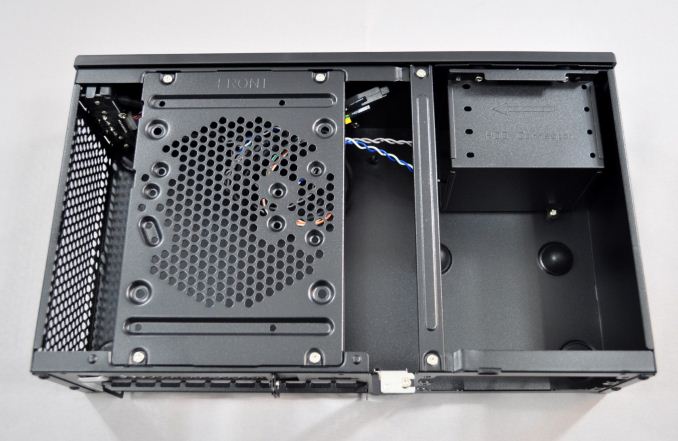 The multipurpose bracket has four functions, but sadly it can only be used for a single one of them at a time. It may be used to hold a slim optical drive, two 2.5" drives, one 3.5" drive, or a 120mm cooling fan. As there is already room for four 2.5" drives on the cage next to the PSU, the second option feels redundant for such a case. Unfortunately, the user has to select between optical disks, a 3.5" device, or extra cooling. We should also note that only slot-loading optical drives can be installed in the Milo ML05. The purchase of such a drive is optional but Silverstone sells such devices and provided us with one for this review. Not that it matters, but it is somewhat funny that "Drive by Toshiba/Samsung" is printed on the box of the optical drive whereas we found an LG drive inside.

Another limitation of the Silverstone Milo ML05 is the PSU. Due to the proportions of the case, an ATX PSU obviously won't fit, so Silverstone designed the ML05 with an SFX PSU compartment instead. This is a more versatile option than having a proprietary PSU attached to the case, but the selection of SFX PSUs is rather limited. Silverstone provided us with one of their best SFX units, the ST45SF-G, an 80Plus Gold certified PSU capable of continuously outputting 450W. Such a unit however will burn a $94.99 hole in your wallet and it's probably overkill for such a low-power system. The modular connectors also add depth to the unit and the cables will be tightly pressed against the HDD cage. Most Milo ML05 users would be far better off with a simpler PSU for half the money, such as the ST30SF. If however you are planning to fit a tiny powerhouse inside the Milo ML05, the option to go with a high-performance PSU is available.

The Mini-ITX board fits comfortably in the Milo ML05 but the cables will be a pain to manage. Even with the simple system we are using to depict the installation of components inside the case, the cables cause chaos above half the motherboard. A low profile expansion card may be used, or a single-slot full size expansion card with the use of a riser. If a full size card is used, coolers taller than 36mm will not fit beneath it -- and that's assuming that the card has no cooler or components extruding from it at all. We would strongly suggest sticking with onboard options over discrete graphics, or at most use a low profile GPU. Depending on the budget, the Milo ML05 can house anything from a low power Atom/Brazos-based up to a rather powerful Haswell/Piledriver-based setup, which ought to be more than enough for the intended use of such a system. 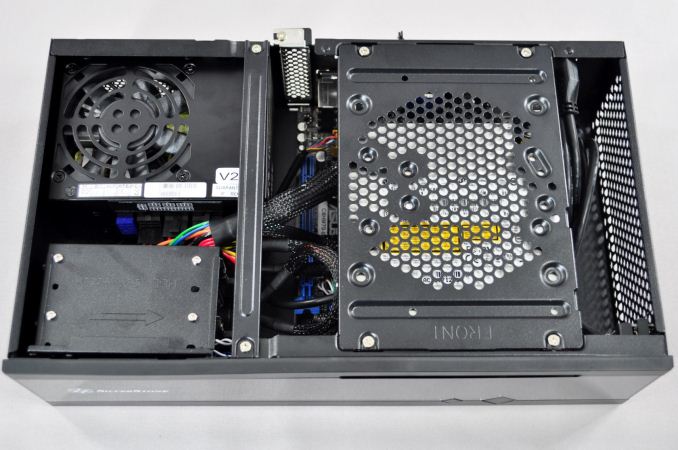