When Anand reviewed the Mac Pro late last year, he received the full fat 12 core edition, using the E5-2697 v2 CPU with a 2.7 GHz rating. The CPU choices for the Mac Pro include 4, 6 and 8 core models, all with HyperThreading. Interestingly enough, the 4/6/8 core models all come from the E5-16xx line, meaning the CPUs are designed with single processor systems in mind. But to get to the 12 core/24 thread model at the high end, Apple used the E5-2697 v2, a processor optimized for dual CPU situations. Based on the die shots on the previous page, this has repercussions, but as Anand pointed out, it all comes down to power usage and turbo performance.

The Mac Pro is designed within a peak 450W envelope, and Intel has options with its CPUs. For the same TDP limit, Intel can create many cores as low frequency, or fewer cores at higher frequency. This is seen in the options on the Mac Pro – all the CPU choices have the same 130W TDP, but the CPU base clocks change as we rise up the core count. Moving from 4 cores to 8 cores keeps the maximum turbo (single core performance) at 3.9 GHz, but the base clock decreases the more cores are available. Finally at the 12-core model, the base frequency is at its lowest of the set, as well as the maximum turbo.

This has repercussions on workloads, especially for workstations. For the most part, the types of applications used on workstations are highly professional, and have big budgets with plenty of engineers designed to extract performance. That should bode well for the systems with more cores, despite the frequency per core being lower. However, it is not always that simple – the mathematics for the problem has to be able to take advantage of parallel computing. Simple programs run solely on one core because that is the easiest to develop, but if the mathematics wholly linear, then even enterprise software is restricted. This would lend a positive note to the higher turbo frequency CPUs. Intel attempts to keep the turbo frequency similar as long as it can while retaining the maximum TDP to avoid this issue; however at the 12-core model this is not possible. Quantifying your workload before making a purchase is a key area that users have to consider.

I talk about the Mac Pro a little because the processors we have for a ‘regular’ test today are 8-core and 12-core models. The 12-core is the same model that Anand tested in the Mac Pro – the Xeon E5-2697v2. The 8-core model we are testing today is different to the one offered in the Mac Pro, in terms of frequency and TDP:

The reason for this review is to put these enterprise class processors through the normal (rather than server) benchmarks I run at AnandTech for processors. Before I started writing about technology, as an enthusiast, it was always interesting to hear of the faster Xeons and how much that actually made a difference to my normal computing. I luckily have that opportunity and would like to share it with our readers.

The system set up is as follows:

Power consumption was tested on the system as a whole with a wall meter connected to the OCZ 1250W power supply, while in a single MSI GTX 770 Lightning GPU configuration. This power supply is Gold rated, and as I am in the UK on a 230-240 V supply, leads to ~75% efficiency > 50W, and 90%+ efficiency at 250W, which is suitable for both idle and multi-GPU loading. This method of power reading allows us to compare the power management of the UEFI and the board to supply components with power under load, and includes typical PSU losses due to efficiency. These are the real world values that consumers may expect from a typical system (minus the monitor) using this motherboard. 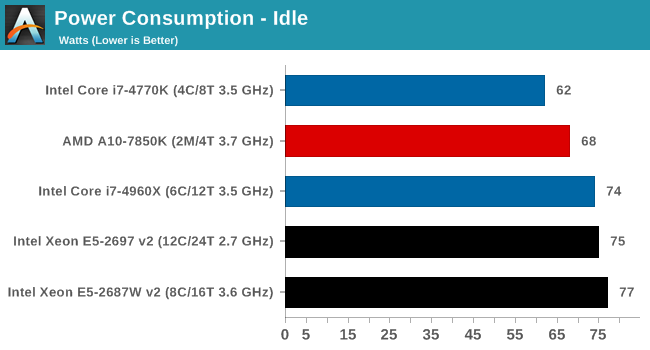 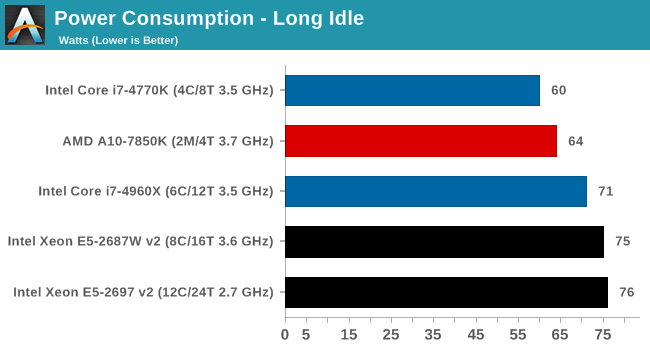 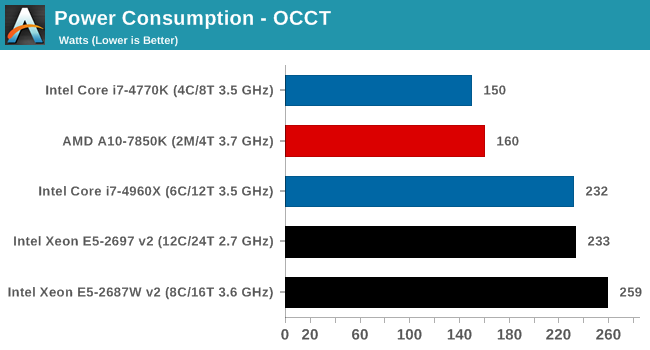 At idle, the Xeons are on par with the Core i7-4960X for power consumption in the GIGABYTE motherboard. At load the extra TDP of the E5-2687W v2 can be seen.

Deferred Procedure Call latency is a way in which Windows handles interrupt servicing. In order to wait for a processor to acknowledge the request, the system will queue all interrupt requests by priority. Critical interrupts will be handled as soon as possible, whereas lesser priority requests, such as audio, will be further down the line. So if the audio device requires data, it will have to wait until the request is processed before the buffer is filled. If the device drivers of higher priority components in a system are poorly implemented, this can cause delays in request scheduling and process time, resulting in an empty audio buffer – this leads to characteristic audible pauses, pops and clicks. Having a bigger buffer and correctly implemented system drivers obviously helps in this regard. The DPC latency checker measures how much time is processing DPCs from driver invocation – the lower the value will result in better audio transfer at smaller buffer sizes. Results are measured in microseconds and taken as the peak latency while cycling through a series of short HD videos - less than 500 microseconds usually gets the green light, but the lower the better. 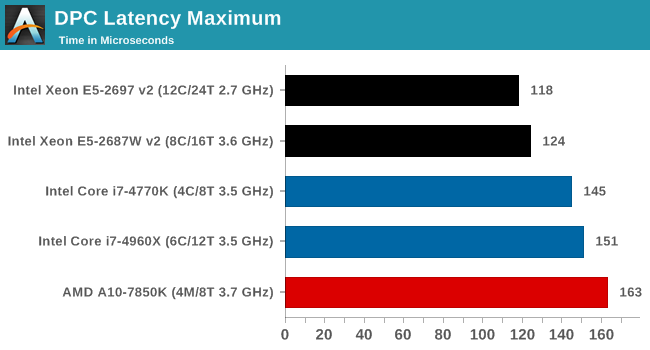 The DPC latency of the Xeons is closer to the 100 mark, which we saw during Sandy Bridge.  Newer systems seem to be increasing the DPC latency - so far all Haswell consumer CPUs are at the 140+ line.