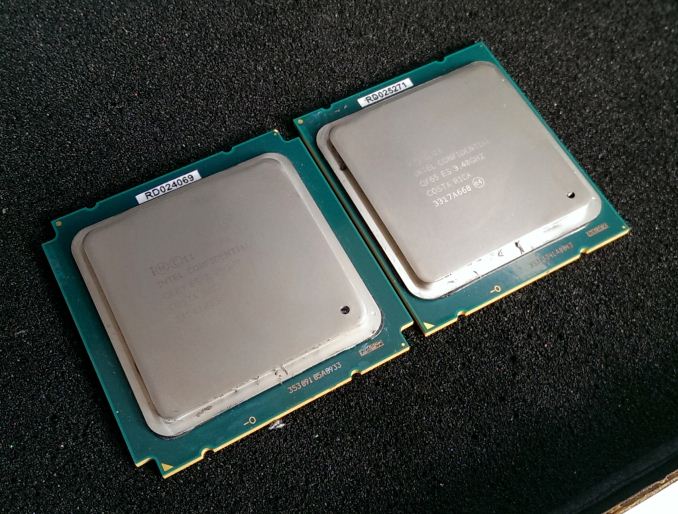 Intel’s roadmap goes through all the power and market segments, from ultra-low-power, smartphones, tablets, notebooks, desktops, mainstream desktops, enthusiast desktops and enterprise. Enterprise differs from the rest of the market, requiring absolute stability, uptime and support should anything go wrong. High-end enterprise CPUs are therefore expensive, and because buyers are willing to pay top dollar for the best, Intel can push core counts, frequency and thus price much higher than in the consumer space. Today we look at two CPUs from this segment – the twelve core Xeon E5-2697 v2 and the eight core Xeon E5-2687W v2.

Firstly I would like to say a big thank you to GIGABYTE Server for the opportunity to test these CPUs in their motherboard, the GA-6PXSV3. This motherboard is the focus of a review at a later date.

High-end enthusiasts always want hardware to be faster, more powerful, and contain more cores than what is available on the market today. The problem here is two-fold: cost and volume. Were Intel to produce a product for the consumer market at more than $1000, a large part of the market would complain that the ultra-high-end is too expensive. The other issue is volume – it can be hard to gauge just how many CPUs would be sold. For example, the consumer level i7-4930K was the preferred choice for many enthusiasts as it was several hundred dollars cheaper than the i7-4960X despite being a fraction slower at stock frequencies. The ultra-high-end enthusiast also wants all the bells and whistles, such as overclockability, a good range of DRAM speed support and top quality construction materials.

At some point, Intel has to draw the line. The enterprise line of CPUs is different to the consumer in more ways than we might imagine. Due to the requirements of stability, overclocking is knocked on the head for all modern Intel Xeon CPUs. For clarification, the Westmere-EX CPU line (Xeon X5760 et al., socket 1366) was the last line of overclockable Xeons. The Xeon line of CPUs must also support enterprise level memory – UDIMMs and RDIMMs, ECC and non-ECC. This leads up to quad-rank DRAM support, such as 32GB modules that themselves can cost more than a CPU.

Virtualization is also another feature Intel limits to certain CPUs, although both some consumer and some enterprise Xeons have them. The defining counterpart tends to be overclockability – if a consumer CPU is listed as overclockable, it does not have VT-d extensions for directed I/O. For users that want ECC memory and virtualization at a lower cost, the enterprise product stack often offers lower core/lower frequency parts at lower price points.

While not necessarily verifiable, there have been reports that Xeon processors are actually the better quality samples that come from the fabs. These are CPUs that have better frequency-to-voltage characteristics and have better chance of running cooler. The main reason this report exists is that when Xeons were overclockable back in Westmere, they were more likely to overclock further than the consumer versions. Also it would make sense from Intel’s point of view – the enterprise customer is paying more for their hardware, and as such a better product in terms of energy consumption or thermals would keep those customers happy.

Intel splits the naming of its Xeons up according to feature set and architecture. For single processor systems using the LGA1150 socket, we get the E3 line of Xeons which at this present time are based on the Haswell architecture and all come under the E3-12xx v3 line:

With Intel’s enthusiast socket, LGA2011, the processors are now split according to their multi-processor capability. Due to the skip-tock cadence of architecture improvements at this level the enthusiast consumer and Xeon line are both one architecture behind the mainstream LGA1150 CPU line.  This results in all the LGA2011 Xeons being based on Ivy Bridge-E. 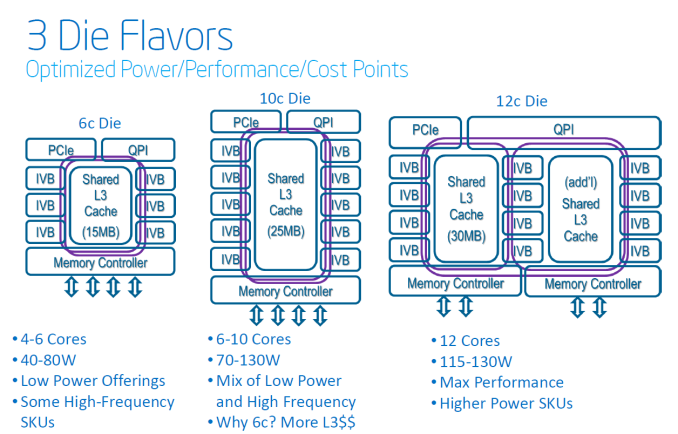 The three dies are aimed at workstations/enthusiasts, servers and high performance computing respectively. I’m not going to repeat what Johan already posted, but it is a really good read if you have a chance to look through it.

The final batch of processors are in the high performance category, using the LGA2011-1 socket. These have been recently released as the E7 v2 line (again I will point a link to Johan’s deep dive on the specifics) under the Ivy Bridge-EX moniker. We have E7-28xx v2 for 2P, E7-48xx v2 for 4P and E7-88xx v2 for 8P systems. Cores for these CPUs go all the way up to 15 due to the three banks of five used in the die. 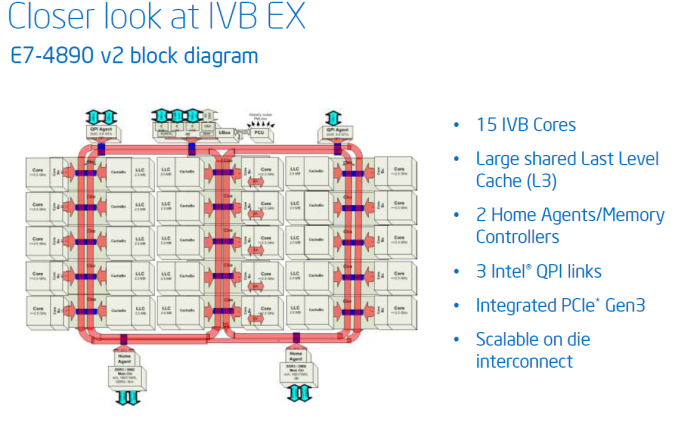 As with the consumer line, the base clock speed of an enterprise CPU is usually not the be-all and end-all of performance. Intel’s Turbo Boost lets the CPU speed up when fewer cores are in use, exercising the difference in power consumption of one core, two core or all-core computation. There is no hard and fast rule when it comes to the turbo modes – Intel will quote the top turbo bin in its CPU database ark.intel.com but in order to find out the scale of multi-core (but not all-core) operation, one has to look into the specification pdfs, such as this one.

With over 50 different CPUs mentioned in that document, it is hard to see which CPUs are going to offer more than others. We extracted the data:

But even this is hard to parse. Some CPUs start off at 3.0 GHz base frequency and have a 900 MHz turbo bin, whereas others move no more than 300 MHz from their base clock. A few CPUs are worthy of attention from our analysis:

The E5-2643 v2 has the most L3 Cache per core of any CPU, at 4.16 MB/core. This is a 10c die offering all 25 MB of L3 cache, but only six cores are active. Reasons for this include database applications that need a large amount of L3 cache per core. For licensing agreements that hinge on per-core pricing, having a larger amount of L3 per core could help save some money by needing fewer cores.