At VIA’s C3 Ezra press-conference there was a little gem that stole the show from the C3 processor; VIA’s DDR Pentium 4 chipset was up and running. 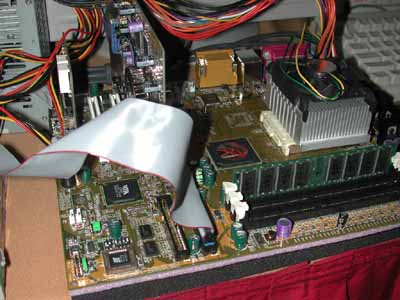 This information directly conflicts with what motherboard manufacturers told us about i845 (Brookdale) DDR being only 15% faster than i845 SDR and still 10% slower than i850.  It is very possible that Brookdale isn’t performing up to spec this early or even more likely is that motherboard manufacturers are currently only running at DDR200 speeds in order to remain synchronous with the FSB on the Pentium 4.

VIA shows muscle but not dual processors

As yet another day at Computex came to an end we heard another interesting story from a motherboard manufacturer.  It seems like Intel isn’t the only one that knows how to play hard ball when it comes to manipulating motherboard manufacturers.  More than one manufacturer reported that VIA offered help in improving the performance of KT266 based solutions if the motherboard makers agreed not to include the SiS 735 chipset in their product lines.

The type of help offered by VIA is in the form of a special performance BIOS as well as updated IDE drivers that are apparently not available as of yet.

There have been rumors of VIA producing a cost effective competitor to the AMD 760MP chipset.  And while we have received some confirmation that there have been talks about producing such a chipset, it is currently very low on VIA’s priority list.  If a DP Athlon chipset project were to ever surface it would do so around Q2-2002 at earliest.

VIA still is far from being a high-end workstation/server chipset manufacturer.  Even AMD is having trouble enough breaking into those markets.