With information now on how DDR is performing on the Pentium 4 platform we tried to get some input on how VIA's DDR solution is stacking up. According to motherboard manufacturers, Intel isn't too happy about them displaying or talking about VIA's P4X266 chipset (VIA's DDR P4 solution) either.

We managed to grab a few snapshots of a P4X266 mockup we were shown behind closed doors at the show however according to the motherboard manufacturers we've talked to, the chipset isn't ready and won't be until Q3 of this year. 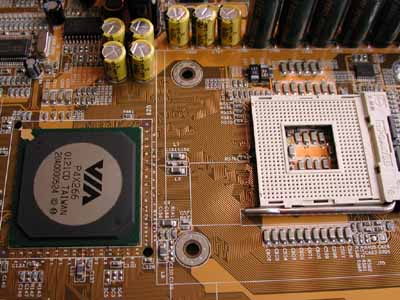 There isn't much for VIA to work out with the chipset since the DDR memory controller is borrowed from the upcoming KT266 rev 2, as is the South Bridge and AGP controllers. The only real thing VIA had to perfect was the P4 AGTL+ bus interface.

Current expectations for the P4X266 are that it will come in slightly below that of the i845 DDR however none of the motherboard manufacturers we talked to had any data to back that up.

The one advantage the P4X266 will have over the i845 is that it will support up to four DIMM slots while the i845 only supports two slots. Apparently designing a motherboard with support for 4 DDR SDRAM slots is quite difficult and even implementing it on current Pro266 designs was quite a challenge. Keep in mind that there is a difference between having four DIMM slots on a motherboard and being able to actually run 4 x 512MB modules in the slots at full load.

For now, it's back to the show. As usual, we'll keep you posted…