Dual processor systems are getting much attention these days. Over the past six months we have been seeing quite a few dual Socket-370 motherboards entering the market, mainly using the VIA Apollo Pro 133A chipset. On the higher-end of the spectrum, Intel's new Xeon platform has just been released and 760MP systems from AMD are on the way.

Despite being older and not as feature filled as some newer chipsets, the good old Apollo Pro 133A chipset is a tried and true solution with SMP support. Being an older chipset has a few advantages as well. On the one hand, it has been in the market since June 1999, so most manufacturers are quite familiar with the chipset already, and on the other hand, the price of the chipset has dropped dramatically over the years.

Our latest contender in the Apollo Pro133A dual Socket-370 motherboard market is the Gigabyte GA-6VXD7. Gigabyte has always produced solid solutions, even if their motherboards might not be the most overclockable or have the best performance. But for those who are asking for a rock solid solution, Gigabyte has always been a good choice. Would the same hold true for the GA-6VXD7? Read on to find out… 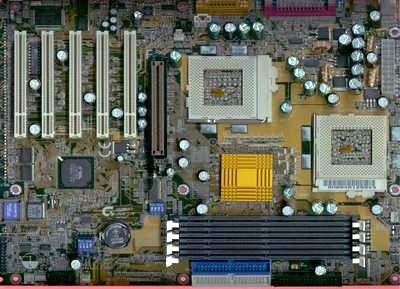 The GA-6VXD7 is relatively compact among dual Socket-370 boards, measuring in at 12 by 9 inches, whereas most other boards are around a half inch deeper. One reason for this is the lack of added features like RAID controllers, but Gigabyte has done a very good job of squeezing things into this small space.

One of the two CPU sockets is located behind the 694X North Bridge while the other one is to the right of the North Bridge. Gigabyte also left quite a bit of space around the CPU sockets so you should be able to install larger HSF units. However, be careful of the several capacitors that are located relatively close to the sockets, but not close enough to prevent the use of any HSF units. 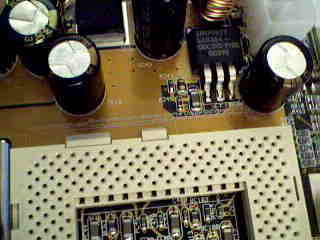 Several capacitors are pretty close to the CPU socket

The power supply connector is located along the right side of the board, a bit behind the CPU socket. This is a pretty good design, since when the board is seated inside the case, you can actually connect the power cables on the HSF unit.

The four DIMM slots are located in front of the North Bridge, and since they are pretty close to the AGP slot, be careful when you have a long AGP card like a 3dfx Voodoo5 5000. Such a long card will prevent the installation or removal of memory must be done with the AGP slot empty.

The IDE and floppy connectors are located along the front edge of the board, which means they do not block any expansion slots. However, make sure your case is deep enough so that drive bays do not block the connectors.