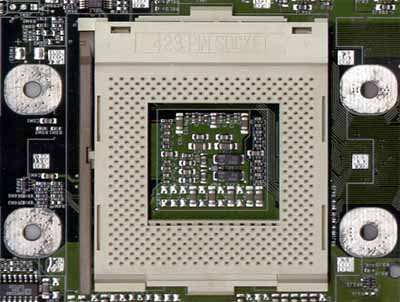 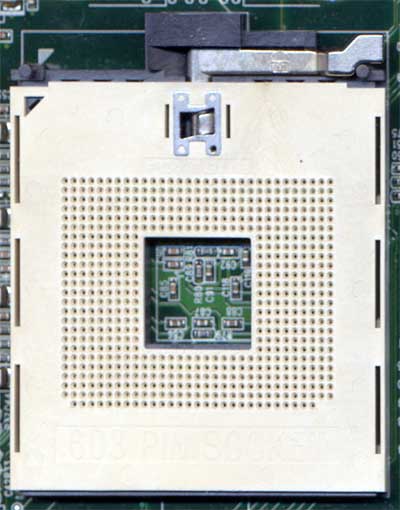 The same change is taking place with the new Xeon.  The Pentium 4 uses a 423-pin socket interface while the new Xeon makes use of a new 603-pin interface.  As you might be able to guess 43% increase in pin count would make the chip incredibly large.  Although the core of the chip is much smaller than the physical chip itself, the number of pins that are required to interface with the board require that the chip be significantly larger than its core.  With a 603-pin interface using the same packaging as the Pentium 4, the Xeon would be incredibly large.  However Intel not only made an interface change with the Xeon but a packaging change as well.

Those that are familiar with the mobile market will know that there are two packages that mobile Pentium III processors are available in: micro Pin Grid Array (PGA) and micro Ball Grid Array (BGA).  The Pentium 4 implements a Pin Grid Array package while the Xeon uses a micro PGA interface reminiscent of the microPGA mobile CPUs.  Because of this, the actual size of the Xeon chip is no bigger than that of the Pentium 4; the pins on the bottom of the CPU are simply packed more densely.  The pins are also much shorter than those on the PGA Pentium 4, meaning that if you happen to bend any of the pins undoing the damage will be much more difficult than it was on a PGA chip.

This microPGA interface is much like what the upcoming 0.13-micron Pentium 4s will debut with, although they will have 478-pins vs. 603-pins on the Xeon.  Because of the change in packaging, the interface socket has changed as well.  The Socket-603 is the first major change to an Intel socket since the first Zero Insertion Force (ZIF) sockets were introduced with the 486.