The first benchmark in our test is Bioshock Infinite, Zero Punctuation’s Game of the Year for 2013. Bioshock Infinite uses the Unreal Engine 3, and is designed to scale with both cores and graphical prowess. We test the benchmark using the Adrenaline benchmark tool and their three default settings of Performance (1280x1024, Low), Quality (1680x1050, Medium/High) and Xtreme (1920x1080, Maximum) noting down the average frame rates and the minimum frame rates. 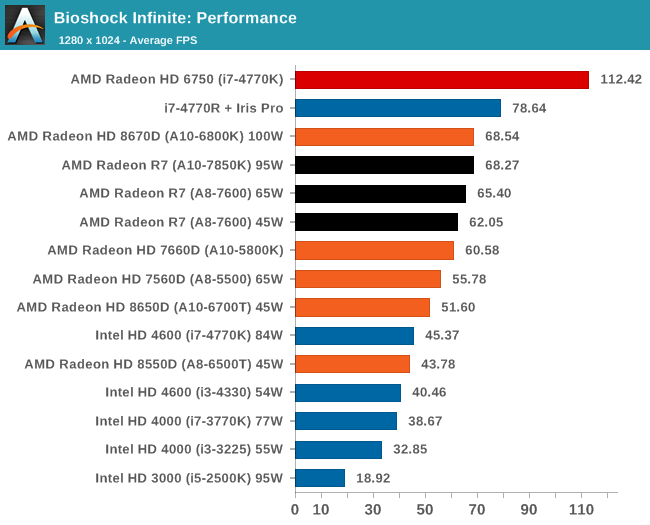 For BI: Performance we see the Iris Pro being top of the IGPs, although the next six in the list are all AMD. The Kaveri cores are all between the 6800K and 5800K for this test, and all comfortably above 60 FPS average. 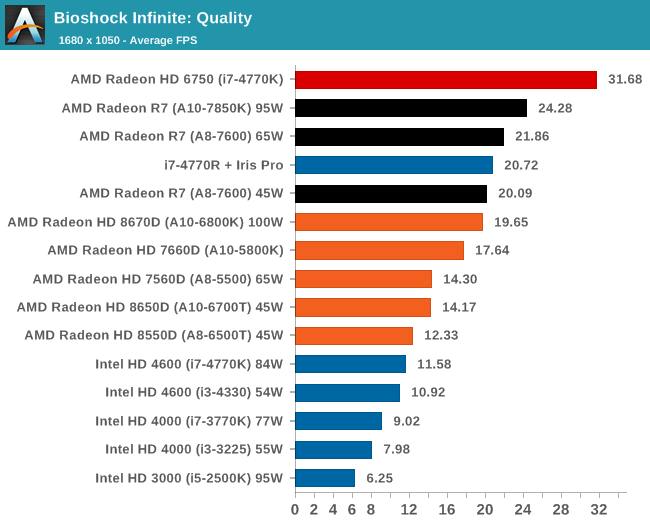 For the quality settings, the Iris Pro starts to struggle and all the R7 based Kaveri APUs jump ahead of the A10-6800K - the top two over the Iris Pro as well. 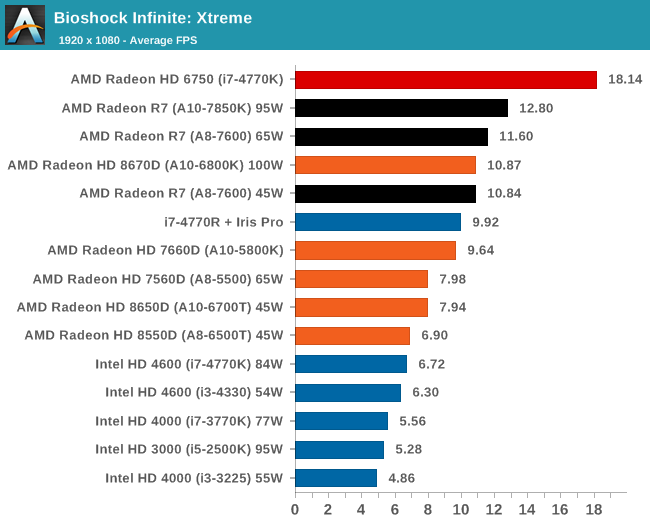 The bigger the resolution, the more the Iris Pro suffers, and Kaveri takes three out of the top four IGP results.

The second benchmark in our test is Tomb Raider. Tomb Raider is an AMD optimized game, lauded for its use of TressFX creating dynamic hair to increase the immersion in game. Tomb Raider uses a modified version of the Crystal Engine, and enjoys raw horsepower. We test the benchmark using the Adrenaline benchmark tool and their three default settings of Performance (1280x1024, Low), Quality (1680x1050, Medium/High) and Xtreme (1920x1080, Maximum) noting down the average frame rates and the minimum frame rates. 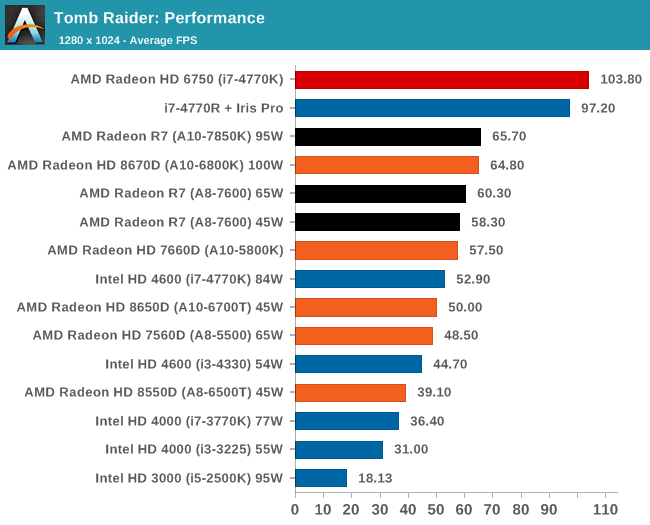 The top IGP for Richland and Kaveri are trading blows in TR. 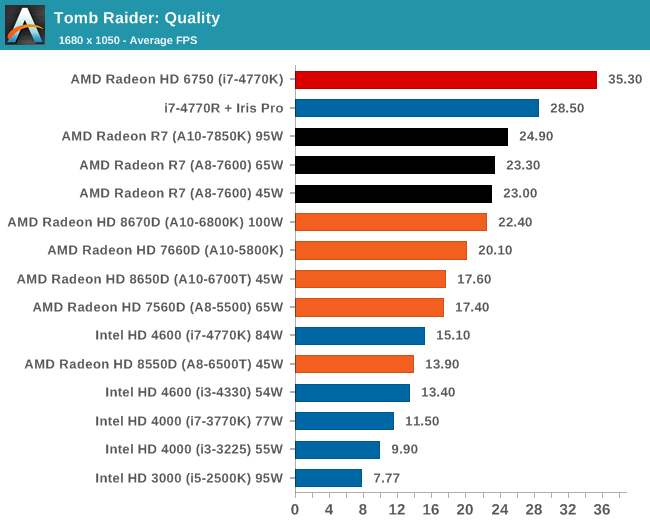 The Iris Pro takes a small lead, while the Kaveri 95W APU show little improvement over Richland. The 45W APU however is pushing ahead. 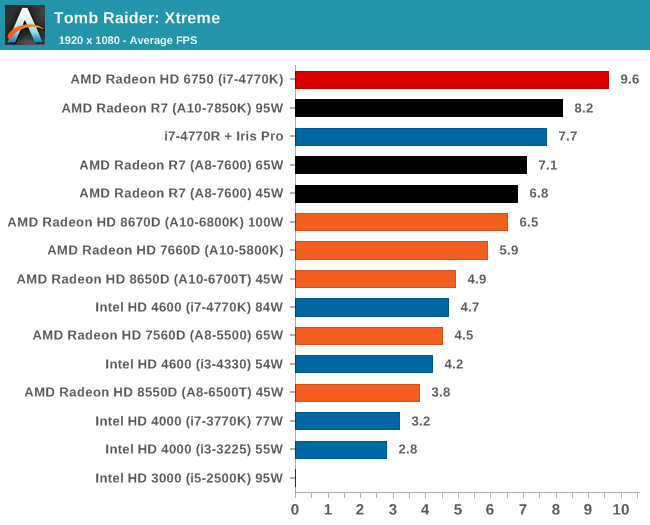 At the maximum resolution, the top Kaveri overtakes Iris Pro, and the 45W Kaveri it still a good margin ahead of the A10-6700T.

Next up is F1 2013 by Codemasters. I am a big Formula 1 fan in my spare time, and nothing makes me happier than carving up the field in a Caterham, waving to the Red Bulls as I drive by (because I play on easy and take shortcuts). F1 2013 uses the EGO Engine, and like other Codemasters games ends up being very playable on old hardware quite easily. In order to beef up the benchmark a bit, we devised the following scenario for the benchmark mode: one lap of Spa-Francorchamps in the heavy wet, the benchmark follows Jenson Button in the McLaren who starts on the grid in 22nd place, with the field made up of 11 Williams cars, 5 Marussia and 5 Caterham in that order. This puts emphasis on the CPU to handle the AI in the wet, and allows for a good amount of overtaking during the automated benchmark. We test at three different levels again: 1280x1024 on Low, 1680x1050 on Medium and 1920x1080 on Ultra. Unfortunately due to various circumstances we do not have Iris Pro data for F1 2013. 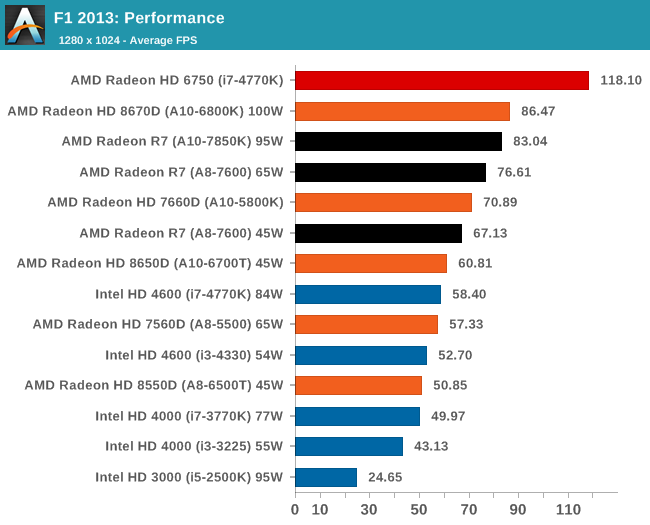 F1 likes AMD here, although moving from Kaveri to Richland at the high end seems a bit of a regression. 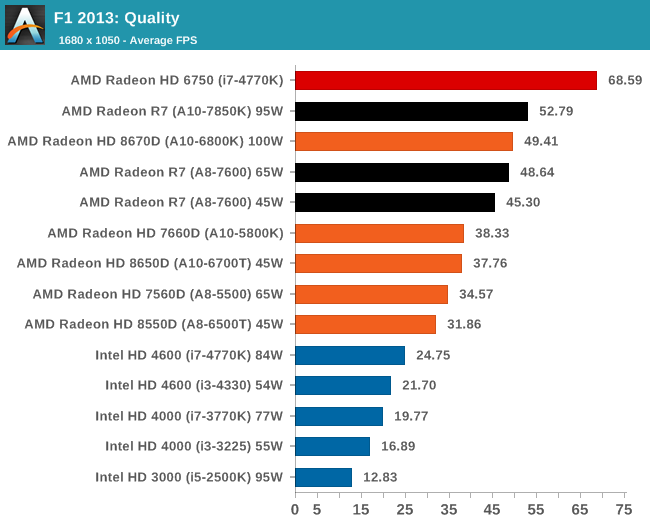 Similarly in the Quality settings, none of the Intel integrated graphics solutions can keep up with AMD, especially Kaveri. 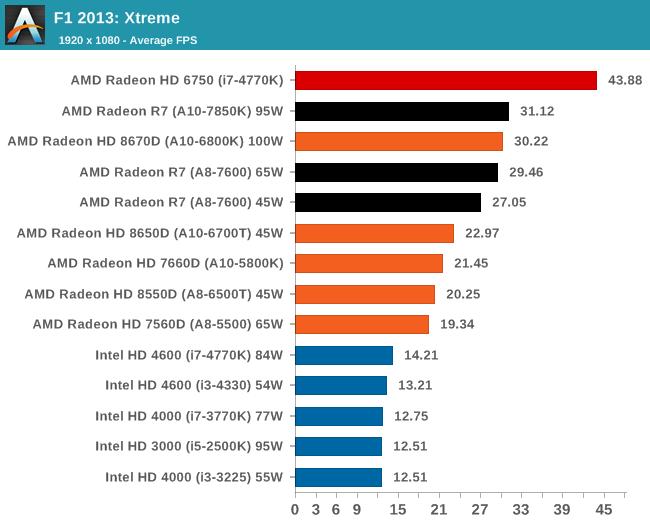 On extreme settings, at 1080p, the top Kaveri APU manages to hit over 30 FPS average during the benchmark. The other A8 Kaveri data is not too far behind.