Had I gotten around to publishing my rMBP review prior to this one you would’ve seen my praise Apple’s CPU selection abilities as of late. Outfitting all 15-inch rMBPs with Crystalwell was a very wise move on Apple’s part. With the Mac Pro the CPU selection is good, but the decision of what to buy is far more complex than in any other product line.

The Mac Pro not only serves as Apple’s ultra high end Mac, but it’s the only option if your needs exceed that of an iMac or 15-inch MacBook Pro. Literally anyone who needs more performance than Apple offers in an all-in-one or a notebook inevitably is pushed to consider the Mac Pro. With a relatively broad professional audience in mind, Apple offers more CPU options for the Mac Pro than on any other shipping Mac:

There are four CPU options, each with varying core counts. The more cores you get, the lower your base CPU frequency is. In the old days, that would be the end of the discussion - you either choose more cores or more frequency, a tradeoff that is ultimately determined by your workload. Starting with its Nehalem architecture back in 2008, Intel introduced two key technologies that changed the face of multicore on the desktop: power gating and turbo boost. The former is a technology that can almost entirely remove power to a core (both active and leakage) when idle, while the second takes advantage of that freed up thermal budget to drive any active core(s) at higher frequencies. Subsequent implementations of Intel’s Turbo Boost technology have scaled the aggressiveness of this opportunistic frequency scaling, but the basic principle remains the same.

Apple advertises core count and base frequency for all of the Mac Pro CPU options, but to really understand what you’re getting yourself into you need to look at each CPU’s max turbo states vs. number of active cores. Neither Apple nor Intel do a great job of publicly exposing this information, Apple avoids doing so in order to keep things clean/simple, and Intel avoids doing so because perhaps it’s fun? Either way I’ve compiled the data on the four CPU options into the charts below.

I've left base clocks out of the graphs although you can see them noted in the legend at the bottom of each chart. 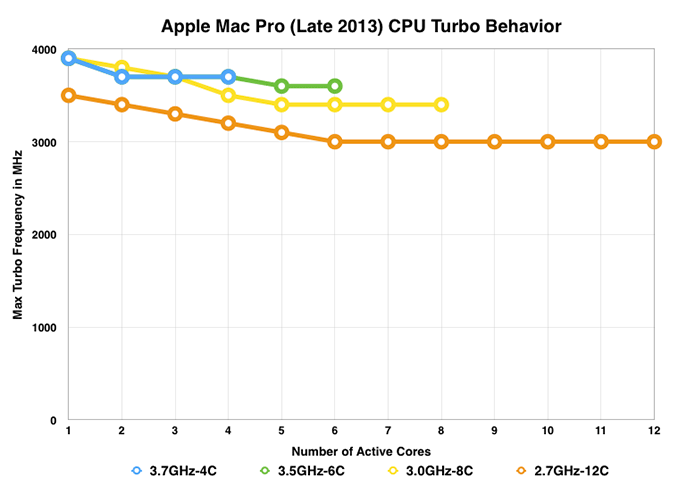 This first chart has the y-axis starting at 0MHz, but the next one is the more interesting as it starts at 2.7GHz and better illustrates/exaggerates the sort of frequency tradeoff you can expect vs. core count: 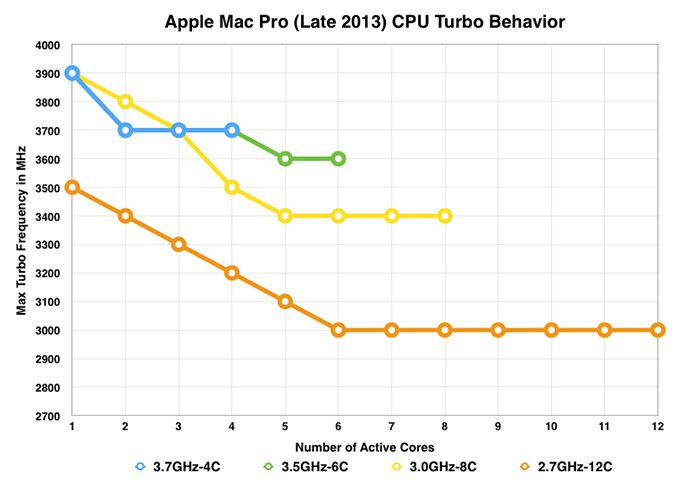 The 4, 6 and 8 core CPU options all offer the same peak single core frequency (3.9GHz). This is very important as single threaded performance remains the gate for system responsiveness outside of thread heavy applications. The 12-core CPU sacrifices around 10% of this peak single core performance.

Early on the 8-core CPU holds the advantage over the rest, being able to hit a higher 2-core max turbo. The octa-core’s crossover point happens at 3 active cores, beyond this point the quad and six core CPUs maintain a slight max turbo advantage.

The key takeaway here is that more cores isn’t necessarily better. You need to weigh the needs of your applications against the number of cores in your system. There is no one-size-fits-all answer here. For kicks I looked at the CPU load for a handful of my benchmarks:

Offline 3D rendering applications typically have the easiest time of chewing up tons of cores, while many others are likely better suited by having fewer cores running at a higher frequency. There's also a serious multitasking benefit if you're the type of person that runs multiple thread heavy workloads in parallel. It's pretty nice having a fairly responsive system while rendering a beefy 4K project in Final Cut Pro. The responsiveness comes courtesy of having a ton of cores in addition to extremely fast IO. That PCIe SSD definitely comes in handy.