I honestly never thought I’d go back to a Mac Pro. I appreciated the flexibility offered by my 15-inch MacBook Pro as a desktop, and there’s no way I was going to take two steps back in single threaded performance just to get a quieter system. Over the past year I spent a lot of time with the 27-inch iMac as I continued to evaluate Apple’s Fusion Drive. I appreciated the greater thermal headroom, the quieter operation and the better GPU performance (at least with the high-end config) that the iMac offered me above the 15-inch rMBP. Combine that with the fact that I’ve been on the road a lot more lately and have had to take the 13-inch rMBP more, and I quickly found myself in a situation where I was back to using a desktop again. 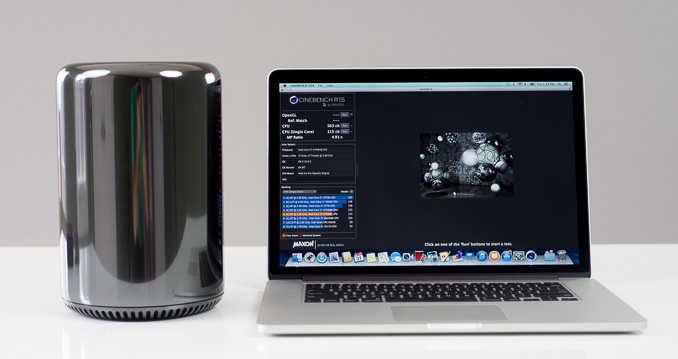 The new Mac Pro offers an option for those users whose workloads can benefit from having more cores, memory and GPU performance. The latest version of Final Cut Pro as well as the rest of Apple’s professional apps do a great job of splitting their work across multiple CPU cores. Even simple tasks like importing photos into iPhoto or Lightroom is extremely well threaded these days. It’s in these workloads where a 6, 8 or 12-core Mac Pro can offer a healthy performance advantage.

Apple’s big bet with the new Mac Pro however is on GPU computing becoming even more relevant in the future. Relying on CPU scaling alone the Mac Pro is doomed to moderate speed increases going forward. By leveraging a pair of high-end GPUs, including one more or less dedicated for compute work, Apple hopes to realize the sort of huge performance gains it has enjoyed in its phones/tablets over the years. The modern Apple is a company that values GPU performance, investing heavily in the GPUs used in all of its products. Even those that leverage Intel’s integrated graphics are pushed as far as possible within thermal constraints. It makes total sense that Apple would choose to outfit its highest end Mac with two GPUs.

It's actually shocking how poorly Final Cut Pro 10.1 runs on older Mac Pros without an upgraded GPU (or even newer Macs with integrated graphics). It's not uncommon to see an 8-core Mac Pro have the vast majority of its cores remain idle, waiting for effects to finish rendering on the GPU in some of these older configurations. If you haven't upgraded the GPU in your Mac Pro you'll likely see a tremendous performance increase when going to the new Pro.

When they’re used, the dual-GPU approach makes a lot of sense. Leaving one dedicated for compute work by default makes for a much better compute environment. Allowing the flexibility to use both however enables apps to take advantage of the power, should they need it. When not used, the user doesn’t pay a penalty for the second GPU. Modern GPUs have no issues driving down to ultra low power states when idle, and since the GPUs share a heatsink there’s no wasted space either.

The ability to support up to 64GB of RAM and a nice PCIe x4 SSD complete the package, making the Mac Pro flexible enough to deal with a different class of workloads compared to the rest of Apple's lineup. 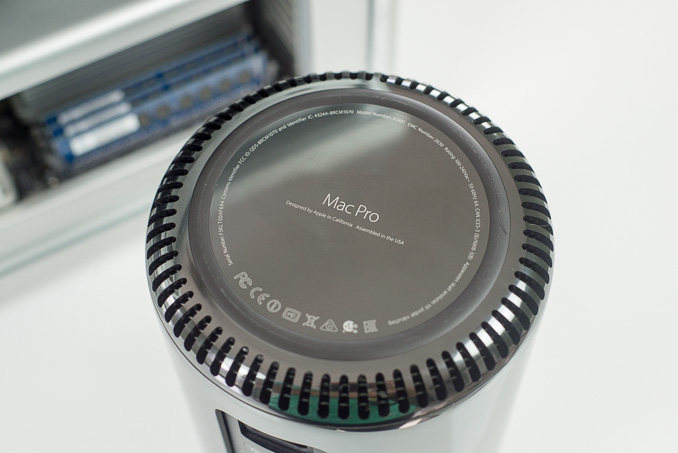 I like the new Mac Pro’s chassis a lot. It’s a risk, but one that absolutely must be taken if the desktop is to continue to exist and thrive. In the 2000s it was all about building something that wasn’t the beige box, now it’s about building something that isn’t the big tower. The new Mac Pro is compact, quiet, powerful all while looking and feeling great. You can argue that some of these things don’t really matter in a desktop, but at the prices you pay for a high-end workstation, they sure are nice to have.

The Mac Pro’s thermal design makes a tremendous amount of sense, especially given the relative maturity of heterogeneous computing applications. Apple’s obsession with delivering big performance improvements each generation drove it to really beefing up GPU performance in the new Mac Pro. The reality however is that with the exception of some of Apple’s core Pro apps (e.g. Final Cut Pro, Motion), compute workloads divided up among both GPUs are few and far between. Furthermore, for those present-day applications that do leverage the GPU, it’s rare that you’re going to see aggressive CPU use as well (Final Cut Pro being somewhat of an exception there). Designing a system with three independent heatsinks only to have most of that space wasted for the majority of the time seems silly - particularly if you’re trying to build a more compact, more modern desktop.

The new Mac Pro’s thermal core works extremely well in practice. The single, shared heatsink and large fan keep the system cool and quiet. Real world workloads that I threw at the machine weren’t enough to throttle any of the processors (CPU or GPU). Despite its compact proportions, the Mac Pro’s cooling solution is appropriately sized for the silicon it serves. I don't see much room for Apple to move to more powerful GPUs though. If the next generation of GPUs aren't significantly more power efficient, Apple may have to wait for 14/16nm FinFET based silicon before it can substantially upgrade the graphics power of the Mac Pro.

Apple did a good job of hiding most of Intel’s Ivy Bridge EP platform faults from the end user. Both USB 3.0 and Thunderbolt 2 are present, with the latter capable of driving up to 6 displays without any funny cable trickery.

I continue to appreciate Apple’s embracing of Thunderbolt, and in the case of the Mac Pro, Thunderbolt 2. Apple really did use every single PCIe lane offered by Intel’s Ivy Bridge EP CPU and chipset, and built a system that’s as balanced as possible from a bandwidth perspective.

As the first Mac with proper 4K support (meaning not only resolution but 60Hz refresh rate as well), the Mac Pro does a reasonable job - assuming you pick the right monitor. It turns out there’s a very good reason Apple only offers the Sharp PN-K321 via the Apple Store: 4K display compatibility under OS X is still a bit like the wild west at this point. I do expect that Apple will quickly fix things (and likely offer their own 3840 x 2160 and/or 5120 x 2880 panels) in the near future, but early adopters beware.

I am disappointed that Apple didn’t enable any HiDPI modes on the 32” Sharp display. While I found 3840 x 2160 a great resolution for video work, for everything else it made on-screen menus and text a bit too small. I would love to see a 2560 x 1440 HiDPI option (rendering offscreen at 5120 x 2880 and but scaling down to 3840 x 2160 for display) but it looks like I may have to wait for Apple’s own display before I get something like that. 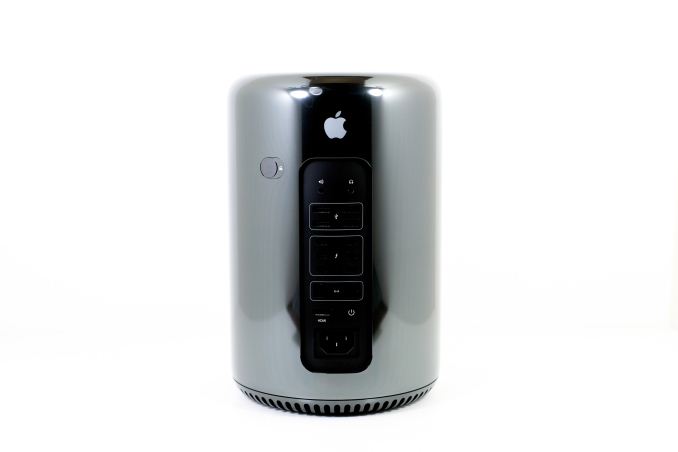 My one hope is that Apple won’t treat the new Mac Pro the same way it did its predecessor. The previous family of systems was updated on a very irregular (for Apple) cadence. Apple pushes its partners and suppliers to meet aggressive schedules with the rest of its products, I would hope that its flagship Mac eventually gets the same treatment. Given how hard Apple pushed Intel to improve the performance of its integrated graphics, I hope Apple can do the same to fix Intel’s workstation roadmap. Even though the Mac Pro with the lowest single threaded performance gets close to the fastest desktop Haswell Apple offers today, I hate that you have to choose. Intel does its highest paying desktop customers a disservice by always selling them a previous generation micro architecture in exchange for more cores and PCIe lanes. In the case of the Mac Pro, especially given the lackluster OS X adoption of QuickSync and how well the Mac Pro makes use of PCIe lanes, I’m actually ok with the tradeoff. You end up with a far better platform as a result.

All in all the new Mac Pro is a good update to its aging predecessor. Apple did a great job with the new chassis and build a desktop that's extremely dense with compute. When I had to dust off the old Mac Pros to prepare them for this comparison I quickly remembered many of the reasons that frustrated me about the platform. The old Mac Pro was big, bulky, a pain to work on and was substantially behind the consumer Macs in single threaded performance. The new Mac Pro fixes literally all of that. If you have a workload that justifies it and prefer OS X, the Mac Pro is thankfully no longer just your only solution, it's a great solution.