Pairing Thunderbolt 2 with Ivy Bridge EP is a bit tricky as Apple uses Thunderbolt 2 for display output as well as data. Typically you’d route all display through processor graphics, but in the case of IVB-EP there is no integrated graphics core. On a DIY PC you enable display output over Thunderbolt 2 by running an extra cable out of the discrete GPU and into a separate input that muxes the signal with PCIe and ships it out via another port as Thunderbolt. Here’s where Apple’s custom PCB work comes in handy as all of this is done internal to the Mac Pro. The FirePro’s display outputs are available via any two of the six Thunderbolt 2 ports, as well as the lone HDMI port on the back of the Mac Pro.

How does Thunderbolt 2 differ from the original? For starters, it really would’ve been more accurate to call it Thunderbolt 4K. The interface is fully backwards compatible with Thunderbolt 1.0. You can use all previous Thunderbolt peripherals with the Mac Pro. What’s new in TB2 is its support for channel bonding. The original Thunderbolt spec called for 4 independent 10Gbps channels (2 send/2 receive). That meant no individual device could get access to more than 10Gbps of bandwidth, which isn’t enough to send 4K video.

Thunderbolt 2 bonds these channels together to enable 20Gbps in each direction. The total bi-directional bandwidth remains at 40Gbps, but a single device can now use the full 20Gbps. Storage performance should go up if you have enough drives/SSDs to saturate the interface, but more importantly you can now send 4K video over Thunderbolt. Given how big of a focus 4K support is for Apple this round, Thunderbolt 2 mates up nicely with the new Mac Pro.

So far I’ve been able to sustain 1.38GB/s of transfers (11Gbps) over Thunderbolt 2 on the Mac Pro. Due to overhead and PCIe 2.0 limits (16Gbps) you won’t be able to get much closer to the peak rates of Thunderbolt 2.

Here’s where the six Thunderbolt 2 and three TB2 controllers come into play. Although you can daisy chain a 4K display onto the back of a Thunderbolt 2 storage device, doing so will severely impact available write bandwidth to that device. Remember that there’s only 20Gbps available in each direction, and running a 3840 x 2160 24bpp display at 60Hz already uses over 14Gbps of bandwidth just for display. I measured less than 4Gbps of bandwidth (~480MB/s) available for writes to a Thunderbolt 2 device downstream from the Mac Pro if it had a 4K display plugged in to it. Read performance remained untouched since display data only flows from host to display, leaving a full 20Gbps available for reads. If you’re going to connect Thunderbolt 2 devices to the Mac Pro as well as a 4K display, you’ll want to make sure that they aren’t on the same chain.

If we start numbering in the top left corner of the 2 x 3 array of Thunderbolt ports and go left to right down the stack, you'll want to first populate ports 1, 2 and 5 before filling in the rest. The diagram below should help simplify: 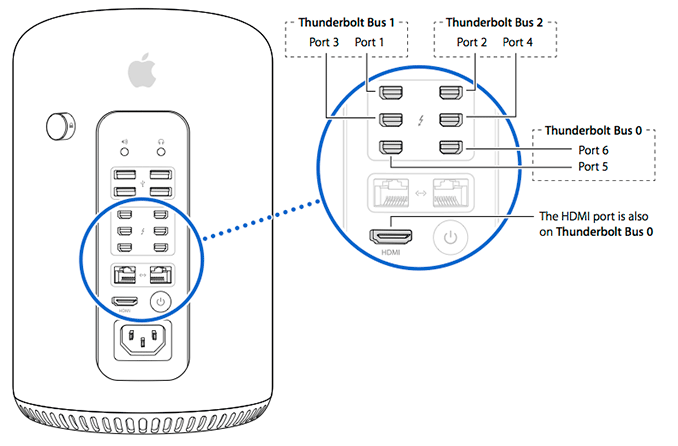