As always, last but not least is our look at power, temperature, and noise. With the reference 290 the high performance of the card came at the cost of significant noise, so the arrival of customized cards presents board partners with a chance to offer better, quieter cooling solutions than what the reference 290 was capable of. In the case of Sapphire and their Tri-X cooler, we’ve already seen that it has proven to be a very capable cooling solution for the heavily overclocked 280X Toxic, so this bodes well for Hawaii based cards. Simply put, if Sapphire can match the 280X Toxic’s cooling performance on the 290 Tri-X OC, then they will have solved the reference 290’s biggest drawback.

Looking briefly at voltages, our 290 Tri-X OC is indistinguishable from our reference 290. Sapphire is doing some degree of binning here to identify boards capable of hitting their higher factory overclocks, but it doesn’t look like they’re picking chips for low power usage, or alternatively making any voltage adjustments to help hit those clockspeeds.

Moving on to average clockspeeds, to no great surprise the 290 Tri-X OC has absolutely no problem hitting and sustaining 1GHz across all of our games. The 290 series is not seriously power limited except in the case of FurMark, so being able to sustain the GPU’s maximum boost clocks is solely a function of cooling, an easy task for the Tri-X cooler to accomplish. Company of Heroes 2 is of course the sole outlier here for the reference 290, but the 290 Tri-X OC had no problem sustaining 1GHz even though it’s based on an AMD reference board. 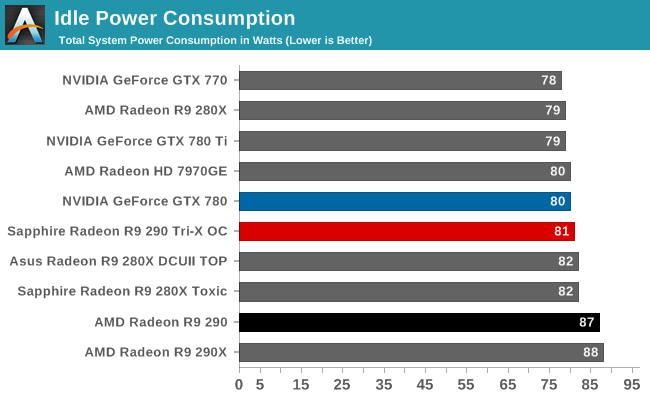 Curiously, the power consumption of the 290 Tri-X OC is notably lower than the reference 290. This isn’t a fluke in our results and we don’t have a solid explanation for this at this time, but for some reason we’re able to idle at a lower degree of power consumption with Sapphire’s card than we are our reference card. There is a difference in fans due to the different coolers, but based on what we’ve seen in the past we don’t believe the fans are responsible for this. 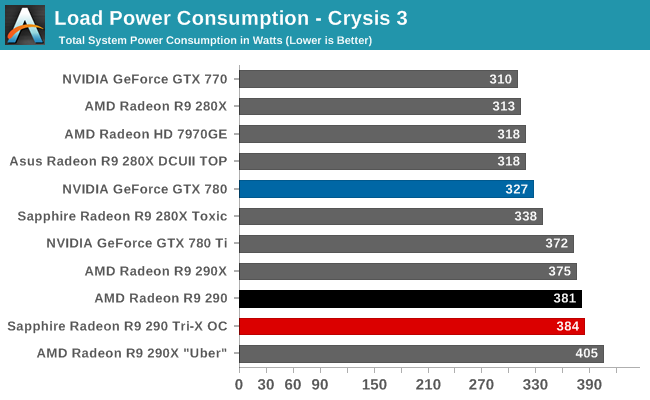 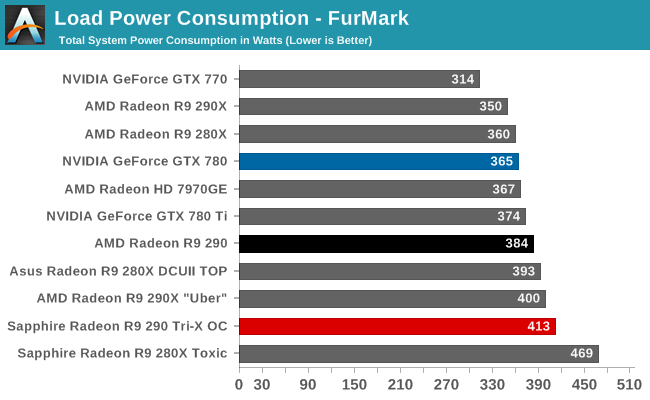 As for load power consumption, we have two different scenarios going on. Under our gaming workload the reference 290 was already able to hit its maximum boost clock, so with the 290 Tri-X OC operating at a similar voltage and only a slightly higher clockspeed, we’re not seeing a meaningful increase in power consumption. This being despite the lower temperatures of the GPU, which would normally offer at least some savings due to reduced leakage. What this means is that custom coolers will not be able to do anything about the 290’s lesser weakness, which is its power consumption relative to the GTX 780. 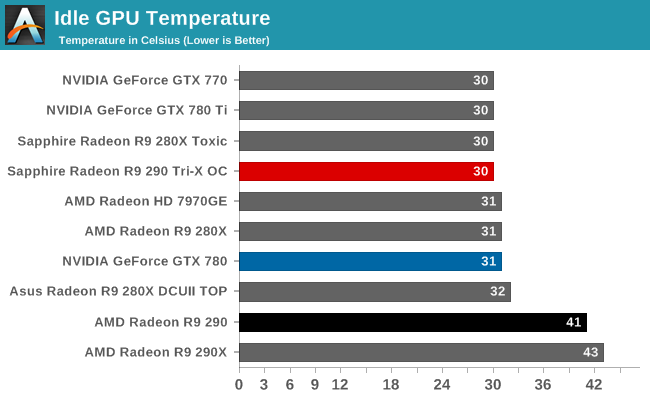 Moving on to idle temperatures, Sapphire’s 290 performs as we’d expect it to. AMD’s blowers were somewhat hobbled here, but with an open air cooler in the mix idle temperatures for just about every card is going to bottom out at around 30C. 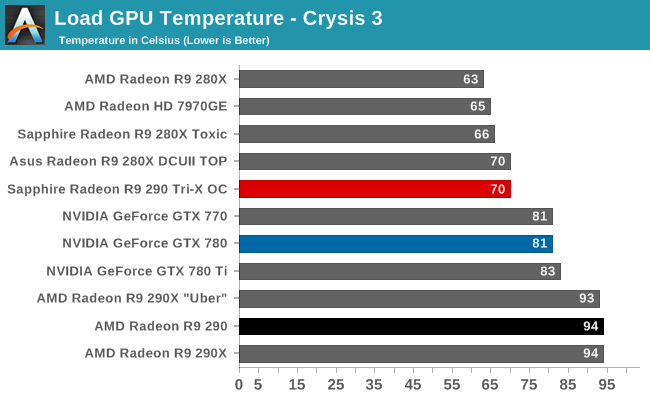 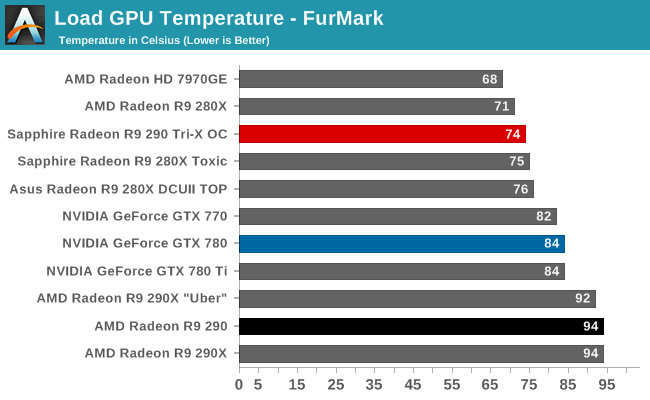 With our load temperatures we get our first sign of how well Sapphire’s Tri-X cooler can handle a Hawaii GPU, and so far things are looking good. Under Crysis 3 the Sapphire 290 is topping out at 70C, right in the range we’d expect an open air cooler. Meanwhile in our worst case scenario of FurMark the Sapphire card only warms up a few more degrees to 74C. Compared to AMD’s reference card this is of course a huge difference, representing a 24C and 20C improvement respectively. As we saw in our review of the 290X high temperatures aren’t necessarily a problem so long as they’ve been planned for in the design phase, but at the same time for the reference 290 series cards this went hand-in-hand with thermal throttling. Meanwhile Sapphire’s card will have no such problem, as it clearly has plenty of thermal headroom to work with.

Ultimately the fact that we’re in the 70s tells us that (by our metrics) Sapphire has done a good job balancing temperatures and noise on their fan curve. It means the Sapphire 290 doesn’t deliver the coolest temperatures, particularly under our gaming workloads, but it also means the cooler isn’t working harder than it really needs to (and generating more noise in the process). For a non-overclocking card there’s little benefit to having temperatures below 70C. 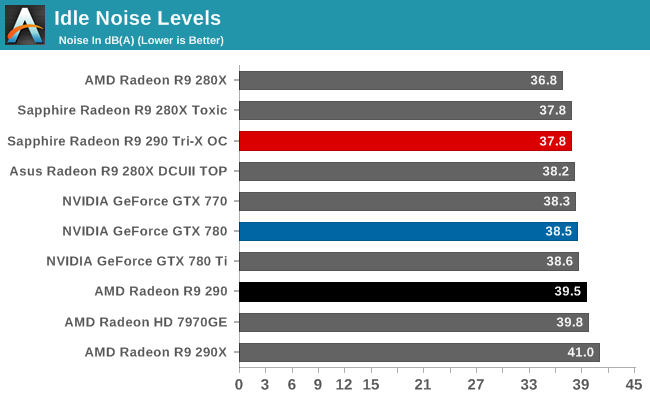 Last but not least is of course our section of noise benchmarks, starting with idle noise levels. Given the reference 290’s weaknesses and the 290 Tri-X OC’s strengths, Sapphire’s card is in a good position to resolve the 290’s biggest drawback, making our noise testing by far the most interesting aspect of this review in our eyes.

Anyhow, idle noise testing starts off well enough. At 37.8dB(A) the 290 Tri-X OC is near the top of our charts, tightly clustered among other open air coolers and tying the other Tri-X card in our roundup, the 280X Toxic. 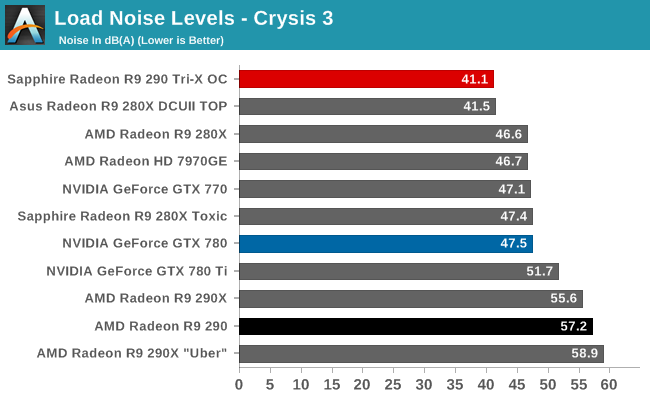 Over the last few months we’ve seen some very impressive open air cooled cards come across our labs. But as 2013 comes to a close it may very well be Sapphire’s 290 Tri-X OC that’s the most impressive of them all. Despite the high power load presented by a 290 card and in contrast to the problems AMD’s reference cooler encountered, Sapphire’s 290 Tri-X OC completely sweeps the field here. We would just as well have expected it to beat all of our blower based cards and even tie some of our other open air cooled cards, but as we can see it has gone above and beyond every other card when it comes to noise levels under our Crysis 3 gaming workload.

At 41.1dB the 290 Tri-X OC beats a number of Tahiti based cards, including our 7970GE and Sapphire’s own 280X Toxic, and it even edges out Asus’s impressive 280X DirectCU II. This not only makes Sapphire’s 290 the quietest high-end card we have, but it also means we’re seeing Sapphire dissipate an estimated 250W of heat while only generating a very, very limited amount of noise while doing so. Or to put this another way, Sapphire’s 290 is 16dB quieter than the reference 290, nullifying our earlier noise concerns and then-some. 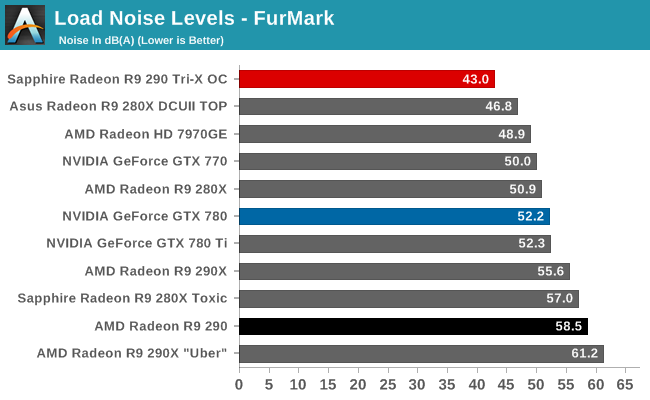 Under FurMark Sapphire’s extremely impressive cooling performance continues unabated. Even with the additional thermal load imposed by FurMark our noise levels only rise to 43dB, which by our standards would still be considered very quiet under even Crysis 3, never mind a pathological program like FurMark. With FurMark being the worst case scenario for a card’s cooler, this is clear evidence that the Tri-X cooler is capable of handling everything that Hawaii can throw at it, and that it can be handled with ease.

Ultimately at the risk of reducing an entire review down to a few numbers, these noise values are the metrics we came into this review interested in measuring, and to that end Sapphire has completely blown our expectations. Just being an “average” open air cooled card would have been a significant improvement over the reference 290, but to cool a 290 this well makes it a significant game changer.