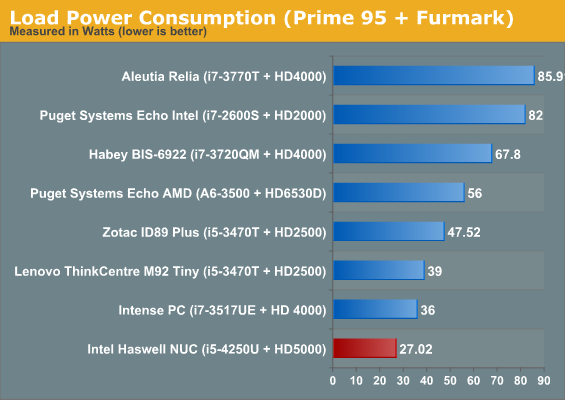 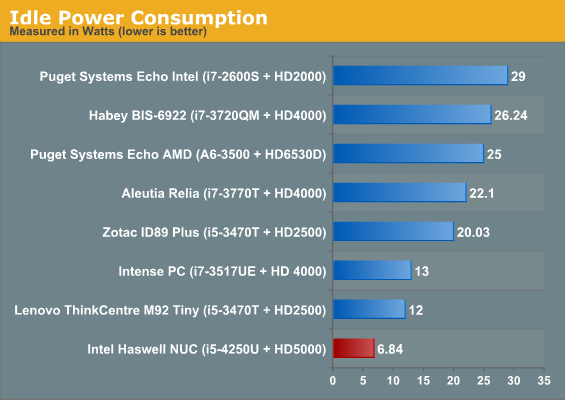 The Haswell NUC turns in stellar numbers for both scenarios. There is no doubt that this is a powerful, yet power-efficient, computing solution.

The D54250WYK has an active cooling solution, but the size of the chassis is still a bit of a concern when it comes to cooling efficiency. To check the thermal performance of the kit, we let Prime 95 fully load up the CPU for 15 minutes, followed by the addition of Furmark to fully load the GPU also for the next 15 minutes. After this, the unit was left to idle while driving the display. Screenshots of the temperatures of various components (as reported by CPUID Hardware Monitor PRO) recorded at 15 minute intervals are presented in the gallery below.

From the HTPC perspective, it is troubling that HDMI audio still needs careful configuration in XBMC 12.3. For bitstreaming to work, XBMC has to be configured with WASAPI and not Direct Sound. The symptoms are the same as the Netflix HD audio issue. It is also a pity that interlaced VC-1 DXVA decoding doesn't work in XBMC. These are issues faced by the average consumer. We didn't touch upon the HDMI full range problem which HTPC enthusiasts treat as primary issue. All in all, it looks like Intel's graphics drivers still need to resolve lots of issues. While we have seen stellar progress over the last couple of years, it only leaves consumers asking for more to completely move away from discrete GPUs for HTPCs.

Moving away from the HTPC area, the NUC's low power consumption as well as small footprint enhance its appeal for use as thin clients or even full blown PCs for average office / home desktop use. The traditional desktop is being re-imagined in multiple ways with the advent of the touchscreen AiOs and form factors such as the NUC and the BRIX. The comparatively low cost and flexibility provided by the latter has ensured that the NUC form factor is here to stay as yet another excellent computing platform option for consumers.